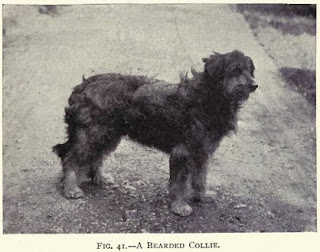 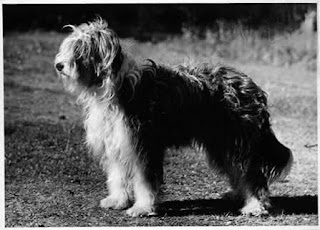 And here's the Bearded Collie that won Crufts this year:

A coat this profuse is head-shakingly stupid in a herding breed and totally impractical for all but the most dedicated pet owner. This is what the show Beardie has become on the outside. And on the inisde there are problems too. The breed suffers from auto-immune problems that are almost certainly the result of heavy inbreeding from a foundation stock of just 12 dogs.

Fortunately, there is a population of unregistered working-bred Beardies out there that could offer the registered-population some much needed new blood. Indeed, some of them boast some rare MHC haplotypes (genes that are involved in immune function) that could be very precious indeed to a breed that suffers from immune problems

But, predictably, the UK breed clubs are resisting this ingress of what they see as tainted blood.  Their claim? There's no need beause  the KC Beardie is "basically a healthy breed". Their fear? That the working beardies are "known to have Border Collie bloodlines behind them" and so therefore could bring in collie health problems that are not in the current KC Beardies. They are also anxious about the introduction of the merle gene that exists in working Beardies but not in the KC-registered dogs.

"The health issues caused by the merle gene are well known in other breeds and to open the door to deafness and blindness seems to us to be very irresponsible, especially in these days of public interest in matters of canine health," argued the Breed Clubs Liaison Committee last week (somewhat disingenously given that one of the biggest canine health issues is the lack of genetic diveristy in KC-registered breeds).

"The merle gene, even when single (M/m), slightly increases the amount of white. Beardies are irish patterned, but they have been bred close to the most extreme version of irish: they normally have a wide white collar, all white forelegs, white muzzle and blaze or at least a stripe on the face," explains Liisa. "I've seen minor white body spots and so it looks like some Beardies are "white factored" aka they do carry a spotting pattern with far more white, like piebald or extreme white."

Essentially, this means that introducing the merle gene may increase the possibility of pups born deaf.

• the merle gene has always been in Beardies. In fact merle was listed as a colour in the early breed standard - it's just that none of the original 12 foundation stock carried it and so the KC population doesn't carry it today and the colour was quietly dropped from the breed standard some time ago.

• the merle gene exists and is managed in many other breeds, including Shelties, Australian Shepherds and Border Collies.  (It is not managed so well in Great Danes but that is for reasons that don't apply here.)

• the colour would be recorded on a dog's registration certifcate and that should be enough to prevent any breeder from doing a risky merle x merle breeding.

In their fight to prevent working Beardies from being registered, the Beardie clubs claim that even a dog with one copy of the merle gene can have sight and hearing defects. This was noted in an isolated (laboratory) population of dappled Dachshunds (dapple being the Dachshund term for merle) and hinted at in one or two other studies, although most other breeds have not reported problems, and that includes working-bred Beardies.

Brambledale Beardies' Lynne Sharpe believes the benefits far outweigh the risk. Lynne breeds old-fashioned Beardies - ie ones you can own without also employing a full-time hairdresser - and she has a long waiting list for her puppies.  She is a former show breeder who "saw the light" and she is now on her second attempt to persuade the KC to register her dogs (the first attempt was scotched by the breed clubs).

"Given the very small number of merles likely to be registered with the KC, the risk seems to be vanishingly small,"says Lynne. "The is just another attempt to frighten people into opposing the opening of the closed Breed Register to allow the much-needed new blood that working-bred Beardies could provide.

"I had no intention of continuing to press for KC acceptance as I felt - and still feel - that the KC has been responsible for the ruin of so many breeds. I then started my website, simply as a means of countering the misinformation campaign being run by the clubs.....and was amazed and delighted to receive an overwhelmingly positive response from the dog-loving public, many of them people who had owned show-type Beardies and been devastated to lose them from auto-immune disease and many more Beardie lovers who felt that the show Beardie was no longer the happy, healthy, workmanlike companion that it had been.

"I have also been encouraged by the response of KC Beardie breeders from overseas, many of whom are all too aware of the problems caused by the limited gene pool and are desperate to do something about it. Many of them see my dogs as the only way out of the cul de sac.......but, although a few brave souls have taken Brambledale puppies and patiently gone through the long process of getting them registered in Germany and France, this is not a possibility in other countries, where my dogs would only be accepted if they were registered in the UK. So, very reluctantly, I approached the KC again and was invited to submit a formal application - which I did in July. I am still waiting for a decision."

Meanwhile, the  breed clubs are claiming that the working Beardies have other health problems that could be the ruin of the KC population. But this is certainly not true of Lynne's dogs.

"My dogs are probably the most health-tested Beardies in the world," insists Lynne. "I have five generations of eye-tested stock and my youngsters are fourth-generation working-bred, with no problems, whereas the dogs already on the Breed Register do not have to be tested, examined or monitored in any way at all. Why would it be necessary to regard mine as a threat?"

It is not quite a "no-brainer" given the merle element, but here's hoping the Kennel Club makes the right decision on this one as, indeed, it did with the Dalmatians earlier this year.
Posted by Jemima Harrison at 21:48