One of the things I found most depressing when making Pedigree Dogs Exposed was seeing a young male show male Basset squat to have a pee and see the urine splash all over the dog's belly.

No dog should have so little ground clearance that they risk damaging their penis when going for a walk on anything other than green baize.  Originally a hunting hound, today's show Basset is short and heavy and in no way fit for its original purpose, even if the mind is still willing. We know this, because there are still Bassets that do hunt out there - and they look like this.

In the aftermath of Pedigree Dogs Exposed, the Kennel Club introduced vet checks at championship shows for what were then known as "high profile breeds" - essentially those with the worst conformation problems. The Basset was one of them.

In 2012, this dog (Ch Buzz Lightyear at Dereheath) won Best of Breed at Crufts but was then disqualified after failing his vet-check, albeit for an eye problem, not his resemblance to a badly-fitting valance. 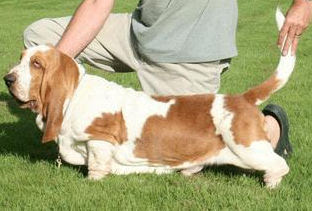 There was uproar in the show-world.  But the Kennel Club held firm, the vet checks continue to this day and Buzz was never bred from.

Even better, the following year,  this dog won best of breed at Crufts 2013. Result!

Sadly,  the 2013 BOB was mated several times with no puppies ensuing. And then, horror of horrors, this massively overdone bitch won the following year.

Since then, it's been up and down but mostly down. In 2018 it was good to see this more moderate bitch (Switherland Smart Alice) win. 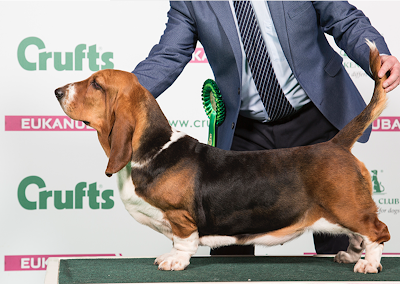 But overall, the trend has been back towards lower, heavier dogs.  The murmurings from ringside is that this breed, with less focus on it in recent years,  is slipping back to where it was.

Which brings us back to the dogs featured at the top of this post. On the left is this year's Crufts winner,  Ch Switherland Smart Image (Danny to his friends) and on the right is Malrich Paris Carver. This pic was taken last weekend at Richmond Championship Show where Danny won BOB under breed specialist judge Judith Murray. 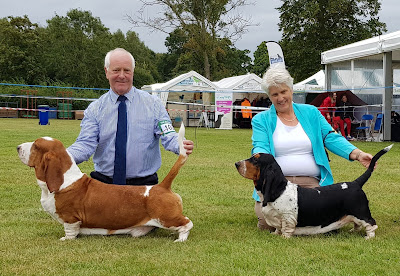 In fact Danny went on to come second in the group under Swedish judge Miss MA E Persson. She will doubtless be familiar with the Swedish Kennel Club guidance re Basset Hounds that includes a concern regarding ground clearance and excess skin. 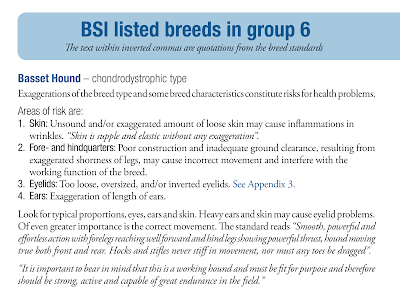 The UK Kennel Club has something similar guarding against excess skin and too little ground clearance.

So I am guessing that six-year-old Danny looks good on the move for a dwarf breed.

Yep, it's a developmental abnormality that, frankly, you wouldn't wish on anything (however stoically that being may deal with it) but in the Basset Hound this is considered a breed feature not a disease. Moreover, it's something us humans have deliberately bred for - a handicap initially designed to slow them down on the hunting field and, more latterly, because it wins pretty ribbons.

But it's a heck of a burden to impose on a dog. And no surprise then that they suffer a number of muscoskeletal issues as a result.  In the US, 40 per cent of more than 200 Bassets that have been tested have been found to suffer from hip dysplasia and 15% have elbow dysplasia. In a recent UK breed club survey, almost 20% of the breed were recorded as having conformation-linked disease. 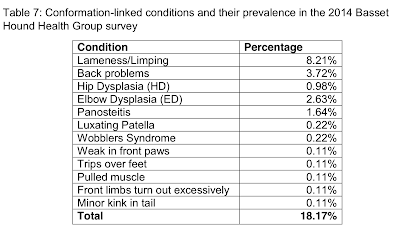 However, only a pitiful four Bassets have been hip-scored in the UK in the past 15yrs. And only six dogs have had their elbows tested - with only one having normal elbows. (See the breed specific stats here.)

Concern about elbows is such that testing is recommended by the Kennel Club. But no one does it.

And, finally, there's one big, dwarfy elephant in the room for Bassets: inbreeding.

The KC calculates the average co-efficient in the breed in the UK as 10%, but there are some top winning dogs that have COIs way higher than that.

Like Switherland Smart Image, the big winner featured above.

Bearing in mind that this is more inbred than a father/daughter or full-sibling mating, this is going some. Moreover, despite the breed's health and conservation plan raising concern about the inbreeding in Bassets, this mating went ahead in 2017. 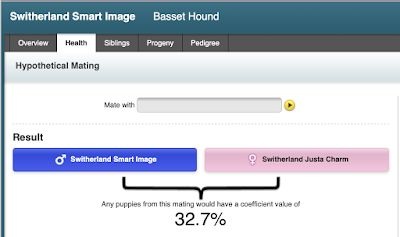 Ta-daa.... inbreeding (or line-breeding as the breeders like to call it to make it sound less bad) works when it comes to winning in the show-ring. At least in the short-term. Sometimes.  But it will be the death of the breed - if fashion doesn't kill it first. Registrations for this breed have dropped by two thirds in the past 10 years, with under 500 registered in 2018. Potential buyers might smile at the 'funny' pix of Bassets swimming in their skin as they run but the hound predisposition to being whiffy - often exacerbated by their skin problems - do not in the main make these dogs easy house guests. 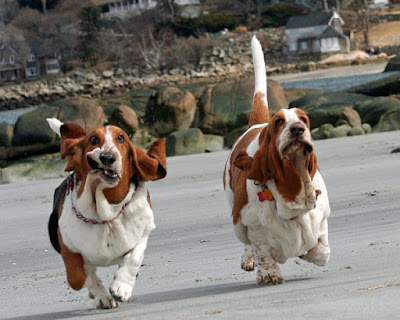 To sum up... there has been some movement on Basset health since Pedigree Dogs Exposed - their eyes are considerably better than the droopy red wells that were almost ubiquitous in 2008. We also much less often see the Queen Anne legs of yesteryear.

But it's deeply depressing to see heavier and lower dogs in the ring again, when really we should be going the opposite way. This is a dog called Laval of Lohaire and although I haven't been able to track him down (anyone?) I think he dates from the 1930s/1940s and really, how much better is he for having longer legs and none of the mad, useless skin that is an affectation of the show-ring? 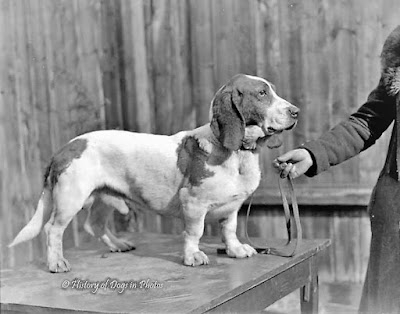