REVEALED: the Crufts GSD footage they didn't want you to see


This is the footage of the German Shepherd that was edited out of last night's  TV broadcast on Channel 4.

As I reported in this post last night, GSD Cruaghaire Catoria was the only dog in the Pastoral Group that wasn't seen moving  - with the reasons why perhaps being obvious.

Of course a dog this stressed is not going to show at their best, but "Tori", as she is known, is just dreadful and it is so sad to see her - especially given some small improvements seen in the UK show-ring in the past few years. (Top winning Elmo von Hühnegrab, while not to my taste, was a small step in the right direction in terms of structure/stability compared to the dogs we filmed in 2007/8 for Pedigree Dogs Exposed.)

As I mentioned last night, the  KC's Facebook page has been inundated with posts/comments from people expressing their dismay that such a dog could have won Best of Breed.

The footage above is clipped from the Day 3 Live Stream that the KC uploaded on to their dedicated Crufts YouTube channel - so it is available online, albeit buried in a very long video.

But, at the time of writing, the KC has not made available its extended video of the Pastoral Group judging which is likely to contain even more damning footage of the dog - despite the judging of all the other Groups being available.

Or rather the KC did make the video available. But it has now hidden it.

If you click on the link, here's what you get. 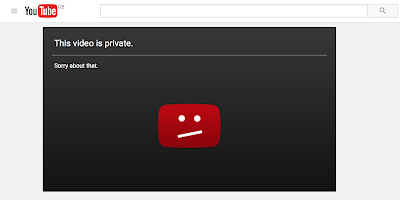 Probably not the best PR move.

You can let the Kennel Club know what you think about the BOB GSD by leaving a comment on the Crufts Facebook page - here.

Posted by Jemima Harrison at 16:14