The dogs that never sleep

On Friday, the Royal Society of Medicine hosted a webinar exploring the parallels between obstructive sleep apnoea (OSA) in humans and brachycephalic obstructed airway syndrome (BOAS) in flat-faced dogs. It was eye-opening - and profoundly sad.

"I was almost in tears listening to the extent of suffering in dogs with BOAS," admits Dr Felicity Vidya Mehendale who co-chaired the event.

Likewise, the spelling out of the widespread debilitating, sometimes life-threatening, consequences of obstructed breathing in humans left me feeling sick about the likely systemic cost in dogs.

Sleep research in dogs is in its infancy, but that some brachycephalic dogs struggle to sleep is not news.  It's recorded in the veterinary literature ((Hendricks et al., 1987; Hendricks, 1992; Hobson, 1995; Koch et al., 2003; Hendricks, 2004). I've highlighted the issue many times - including in 2016 via this YouTube video and, more recently, with this poster illustrating the extraordinary compensatory lengths to which some of these dogs go in order to catch some shut-eye. 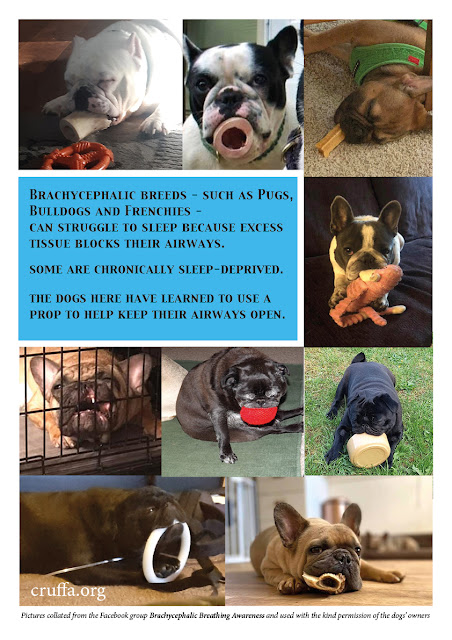 Of course, dogs are masters at falling asleep in funny positions and sometimes with toys in their mouths. If your Labrador does this, you shouldn't worry. You don't even need to worry if you have a brachy dog that does this, unless it happens frequently and it's obvious that it helps your dog sleep.

The dogs on the poster have all been diagnosed with BOAS and all actively seek out an object in order to sleep. Some of them have stopped doing it post-surgery.

Pugs, Frenchies and Bulldogs are often as fleshy internally as they are on the outside and when they fall asleep this tissue relaxes - in exactly the same way as in (often overweight) humans, resulting in snoring and sleep apnoea. Frenchies and Pugs in particular often have narrow/blocked nasal airways. When they're awake they can compensate by breathing through their mouths. But when they're asleep, dogs are obligate nose breathers. They cannot mouth-breathe.  It means they have to wake up to take a breath - unless they prop open their mouths open as the dogs in the poster have learned to do.

It's an extraordinary adaption - but, unfortunately, not all dogs are as smart as the ones above and some are chronically sleep-deprived as a result.

Revealing the cost of OSA in humans were Dr Renata Riha, Consultant in Sleep and Respiratory Medicine at Edinburgh Royal Infirmary and  Dr Catherine McDougall, a consultant in paediatric intensive care and respiratory medicine at the Royal Hospital of Sick Children in Edinburgh.

Sleep science is a relatively new discipline in humans but the consequences of obstructive sleep apnoea are now well-known. Children with OSA have a higher incidence of cognitive and behavioural problems. Adults are four times more likely to have a car accident. Untreated OSA leads to inflammation and an increased risk of a stroke and heart attack. It is illogical to think that there isn't a profound impact on dogs too, even if we haven't measured it yet. It may not be a coincidence that heart problems are common in Bulldogs.

We heard yesterday that in adults and children, OSA can result in hundreds of micro-wake-ups every night interrupting the sleep that is so vital to our physical, emotional and mental wellbeing. Many owners of brachycephalics report that their dogs are restless in sleep - a phenomenon that is marked on this infographic from the Cambridge BOAS Group. 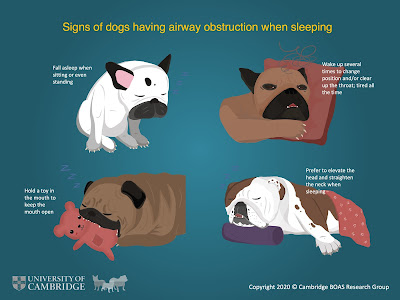 Many years ago, on the old Pedigree Dogs Exposed Facebook group (now closed), someone swapped out an image of a Pug on a billboard for a child with Crouzon syndrome - essentially to make the point that Pugs suffer from distressing cranial deformities. 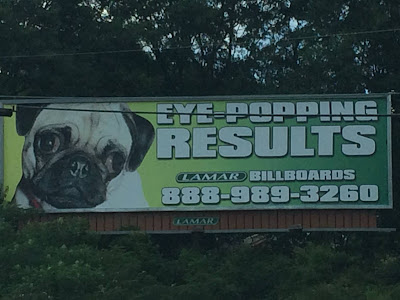 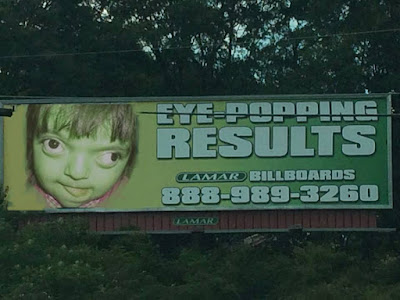 It caused uproar but, as we discovered yesterday from Catherine McDougall,  there are indeed parallels between brachycephalic dogs and children with cranial deformities, including that children with Crouzon, Apert and Pfieffer syndromes suffer from sleep apnoea. 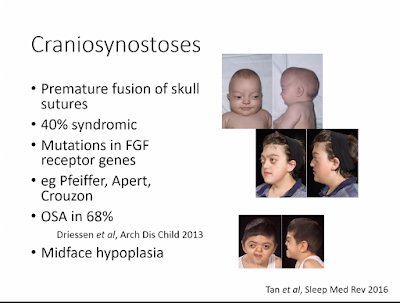 A study in 2019 from the Royal Veterinary College entitled Great Expectations, Inconvient Truths and the paradoxes of the dog-owner relationship for owners of brachycephalic dogs found that around three per cent of owners reported that their brachy dogs had problems sleeping.  That might not sound that many but, given their current popularity, it adds up to thousands of affected dogs.

Certainly, YouTube is awash with videos of Bulldogs, Pugs and Frenchies showing obvious sleeping problems, mostly presented by doting owners as their dogs doing something funny and cute.

This 2013 paper found that over half the Pugs and Frenchies treated for BOAS at the University of Leipzig suffered from sleep problems, with the authors suggesting either than their prevalence has been underestimated in the past or that they have "severely worsened over recent generations of dogs."

That's right.  Some of these dogs don't sleep at all.

If you want to get some sense of what that is like, here's a video of one severely affected dog whose every waking hour was sheer hell. Note how as his head drops in exhaustion, which causes his airway to block, his body begins to heave.

Pimped on Insta for some years by his owner as being cute and funny and featured here before (see here)  - this dog has recently died. I have never wished more for a dog's release.

Of course, for all the similiaries between human OSA and BOAS in dogs, there is one glaring difference: obstructed breathing in dogs is a direct consequence of the deliberate breeding of animals with very flat faces.

As the veterinary presenters articulated the problem yesterday, with wincing examples of dogs gasping for breath, there was palpable disquiet among some of the human medics present that such predictable and preventable suffering should be allowed to continue.