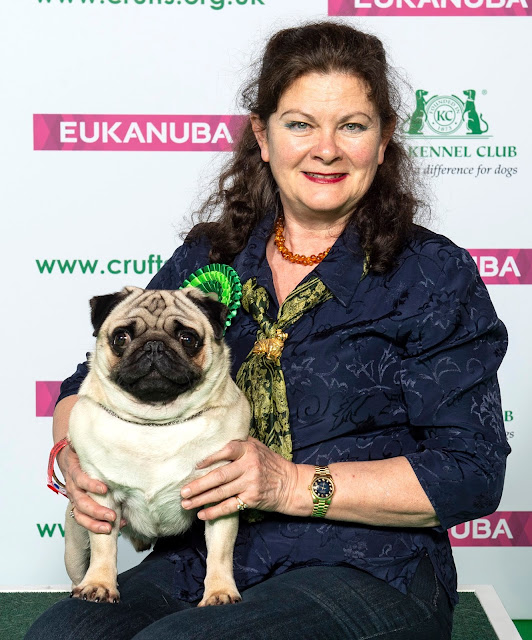 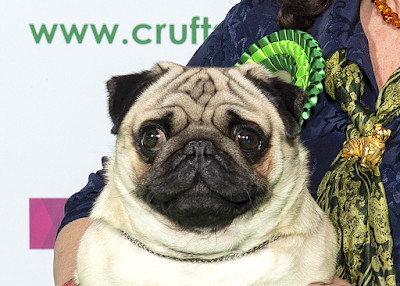 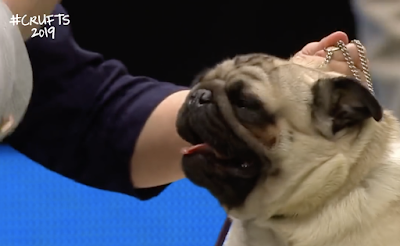 *The Northern Pug Club does list some health-test results here.
Posted by Jemima Harrison at 22:25 21 comments: 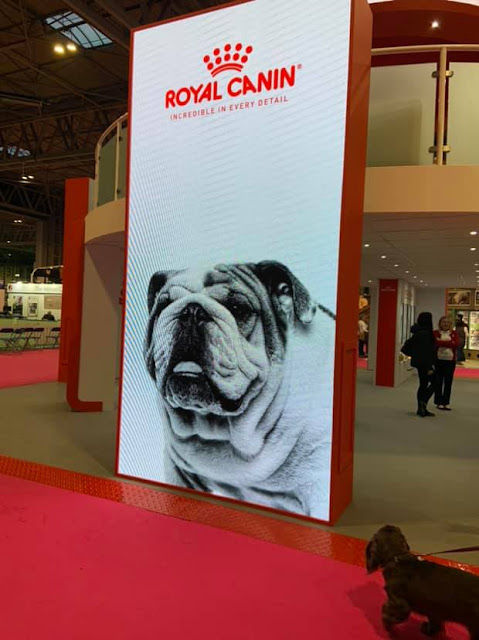 On Thursday night, Royal Canin bowed to pressure from vets and animal welfare campaigners and removed this display from their stand at Crufts.

The move has provoked outrage from Bulldog breeders across the globe, most threatening to never buy Royal Canin again. Even those who've never bought it anyway... ;-)

For those that don't know, there is a move in the UK - sanctioned by the Kennel Club - to persuade advertisers/companies to stop using extreme brachycephalics to sell/promote their goods or services. As I understand it, everyone taking a trade stand at Crufts has been informed about this (at least they were last year).

The aim of the no-brachy initiative, which I started in December 2015 with the launch of CRUFFA,  is simple: to try to reduce visibility and, therefore demand for dogs that are very well-documented as having a lot of health issues.

I felt this was a more positive approach than simply beating-up breeders for producing short-lived dogs with a high risk of breathing, spinal, ocular, oral/dental and fertility/whelping issues. And I was delighted that the Kennel Club, vets, animal welfare bodies and even breed clubs backed the idea through the Brachycephalic Working Group (BWG) that was set up two years ago. You can see the BWG's 2017 statement re this here.

Then, earlier this year, the British Veterinary Association published new guidelines for advertisers to help them make better choices in all the animals (not just dogs) they use to market their stuff.

The combined effort is working.  Companies such as Comic Relief, Costa, HSBC, Costa and Pets At Home are among those who have committed to halting or reducing their "brachy-use".  The initiative has now spread to other countries too, notably in Scandinavia and the Netherlands.  And while you'll still see Pugs, Bulldogs and Frenchies on stuff, I really think it's now on less stuff than it was when we started.

One would hope that those who consider themselves good breeders would be grateful for anything that reduced their breeds' popularity. It is never a good thing for any breed. But sadly most instead see it as persecution. They think it's an animal-rights-fuelled plot to rid the world of Bulldogs, Pugs and French Bulldogs and are outraged that Royal Canin has bowed to pressure.

Now, personally, I'm looking forward to the day where the market for these dogs crashes and when people will be too embarrassed to have one because owning one (in their current form) labels you as unthinking. But if in the meantime a few less can be bred, especially by quick-buck breeders, then surely that's got to be a good thing?

I should say that it probably did not help that Royal Canin's mea culpa statement offered zero explanation as to the backstory, making them look like they were recoiling in horror at their hideous mistake. 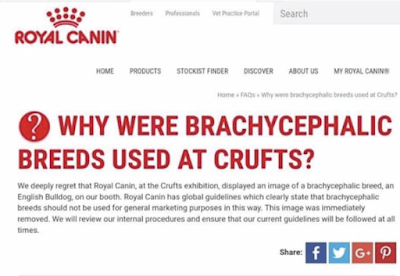 They have actually now removed this statement, either preparing something a little less bald or perhaps bowing to pressure from breeders. I suspect the latter given that the Bulldog breed health rep met with Royal Canin and the Kennel Club at Crufts yesterday. Mrs Collins-Nattrass is a member of the Brachycephalic Working Group but it would seem that the display removal is a step too far for her.

After all, they do market a Bulldog-specific food which is supposed to be easier for the pauvre undershots to pick up. (You'd think, wouldn't you, that a dog once celebrated for being able to hang on to a bull would be able to manage a bit of extruded kibble but hey...) 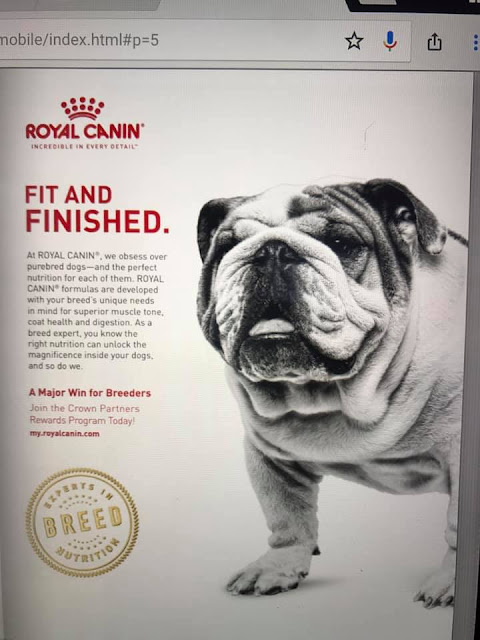 Yeah, I didn't know where to start, either. Well, perhaps with a little vowel substitution.

White supremacy - alive and well at the Kennel Club 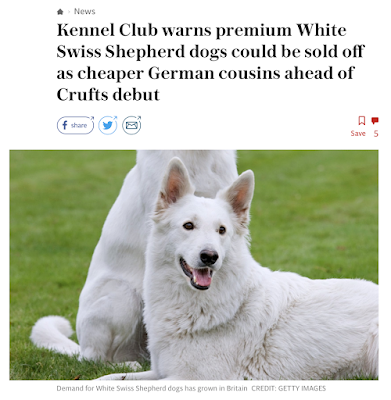 There is such an irritating piece in today's Telegraph, by journalist Val Elliott who has bought hook, line and sinker a Kennel Club-fed story that some unscrupulous breeders are trying to pass-off white German Shepherds puppies as more rare (= more expensive) Swiss White Shepherd pups.

For a start, there is zero evidence of this happening on anything more than a one-off scale. The Telegraph story refers to a single case in south Wales.  A trawl through the UK's internet puppy sales sites reveals a few ads for white German Shepherds at the market price, but not a single ad for a White Swiss Shepherd other than for a single adult female that is KC-registered.

Frankly,  the whole selling of the White Swiss Shepherd as something more precious than a white German Shepherd stinks worse than a month-old corpse in a Victorian sewer.

The White Swiss Shepherd was formalised as a breed in the 1990s by breeders who objected  - I mean not unreasonably - to the fact that Kennel Club breeders used to kill German Shepherds that were born white.

Why? Because white is now a disqualifying fault in German Shepherds, despite the colour having been in the breed from the start.

The breed's (canine) founder's had a white grandfather called Greif. The breed's human founder (Max von Stefanitz) was always at pains to point out that there was no "wrong" colour for a good working dog. And white was considered a perfectly acceptable colour until 1933 when the Nazi party took over the breed club in Germany and banned the colour,  believing (erroneously) that the colour was linked to health issues.

It led to the wholesale slaughter of German Shepherd puppies born with white coats.

The UK and US kennel clubs later blindly followed the German breed standard in effectively barring white German Shepherds from the conformation show-ring.

The result was that white puppies much further afield than Germany ended up being "bucketed" - (drowned in a bucket of water at birth) or otherwise disposed of.

There is, thank goodness, now more of a market for white German Shepherds although this site maintains that some breeders still cull white puppies.

Bottom line, it's all so stupidly arbitrary.  The colour should never have been banned in the first place.  There is a cost to genetic diversity caused by splitting any breed based on colour alone. And how ironic that a breeder of White Swiss Shepherds, who must surely know the history, is now suggesting that white German Shepherds are a second-class cousin?  (Although thankfully the White Swiss Shepherd breeders have, so far, eschewed the broken toplines and wobbly back-ends of the German Shepherds that you'll see trotting round the ring at Crufts this coming week.)

My advice? If you want a White Swiss Shepherd puppy but can't source one because of the long waiting lists, why not go for a well-bred white German Shepherd puppy instead? Choose wisely and it's pretty much the same dog. And hey, it may even ensure that a puppy isn't killed based on its colour.