Video from 2010 of top German show-line iennel in Croatia, here showing off a bitch puppy by a top German sire - for all the world as if she is something to be proud of.

Watch it and weep.

This kennel is currently advertising a bitch, Emely, who is three years old and pregnant with her fourth litter.
Posted by Jemima Harrison at 00:39 78 comments:

Three weeks ago, Neapolitan Mastiff health rep, Kim Slater, was on cloud nine when her heavy male, Doowneerg Usi, went Best of Breed at Leeds and passed his vet check - going on to take 4th in the Group. He has also passed a vet check at Paington Show. But this week, Usi went BOB at the Welsh Kennel Club Championship Show (WKC) - and failed his vet check. His angry owner is now demanding an enquiry.

Kim Slater has worked hard for the health of the breed and has supported the vet checks (brought in earlier this year for 15 high profile breeds) in the face of a lot of opposition.  She feels that Usi's recent wins are vindication both for that support and proof that a "typey" dog could win.

I have to confess that while I was happy for Kim after Leeds (I admire her in many ways), my heart sank a bit.  Usi is clearly in good health and has a very good hip-score of 7/7. But he does have ectropion (as do most NMs) and I wince when I hear Mastino breeders refer to their dogs - as Kim does Usi - as having "plenty of nice quality skin". I find it impossible to see that as a desirable quality, knowing the toll it takes, particularly as the dogs age and particularly in the heavier dogs like Usi.
So while Usi might be brimming with health at the moment, I worry for his future.

Kim knows that I much prefer her lighter, leaner, tauter-skinned Vaoila who is the first Neapolitan Mastiff within the show-world that I have ever truly liked. The Mastinorati look down their nose at her though. Not 'typey' enough.

So I was concerned that Usi's wins at Leeds might herald a return to the heavier NM being rewarded in the ring.  And when Usi went BOB again at WKC last weekend it confirmed him as the Top Neapolitan Mastiff of 2012.  But then he failed his vet check - for abnormal eye conformation which the vet said interfered with normal tear drainage and for scarring and hairloss on his jowl. This is another common problem in Mastino (often the result of skin infections aggravated by slobber),  routinely overlooked by judges before the increased focus on health.

"This isn’t just about my feelings – it’s about the future of the Neapolitan Mastiff in the UK," a very angry Kim slater told Dog World this week. "He is a healthy dog – hip scored, heart and thyroid tested etc.

"I want the world to know that nothing about this process is right. Show are being affected because people are nervous and not turning up.

"If even the best of the best isn’t good enough where do we go from here? I told the vet I have worked my guts out for this breed and that he was judging him on the wrong criteria.

Clearly, there was a bit of an exchange and KC Chairman Steve Dean was called:  "But I received a message saying he was unavailable,” says Kim. "I was barking mad. I think the vet began to realise I knew what I was talking about. I told him I wasn’t a bog standard exhibitor and this wasn’t a bog standard dog."

She followed it up with a letter to KC Secretary Caroline Kisko demanding a full enquiry: "I feel totally let down," she wrote. "After all my years of study, engagement, hard work, supportive stance to the KC throughout a difficult and high pressure period of time for all involved in the high-profile breeds, the very time I required the KC’s support during an unfair and incorrect vet check assessment,, Steve Dean could not walk 20 yards when I have travelled hundreds of miles to attend Clarges Street to support the launch of the KC film in my own time, with my own money."

I'm not sure about the attempt to play the "you owe it to me" card here. Kim may feel she has some leverage as a breed health co-ordinator and it is true that she has supported the KC through difficult times, but she must surely realise that there was no way Steve Dean could get involved - it would totally undermine the principle of the vet checks which are supposed to be independent.

However, she has a point about vet-check inconsistency.  It is, perhaps, inevitable given that vets are human beings and will grade issues differently. Maybe one just has to accept that. After all, the dog world accepts that a dog may win one week but goes unplaced the next.

I still struggle, too, with the fact that breeders are trying to produce a healthier dog without sacrificing what they see as essential type - when it's that essential type that is the problem. It's like the pug breeders trying to find a gene for brachycephalic airway syndrome in order to be able to continue to breed dogs with really flat faces.  In both instances, it's possible. But an awful lot of dogs are doing to suffer along the way.
Posted by Jemima Harrison at 08:53 43 comments:


I confess that when I saw this picture my heart beat a bit faster.  I'm sure there'll be some who will whinge about some aspect of his construction, but just look at this dog's head.. distinctive but not overdone. Beautiful, expressive, clean eyes, too. 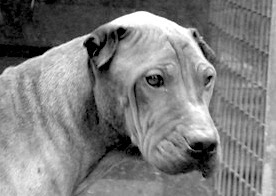 This dog is an original "bonemouth" Shar Pei and he is featured in the current issue of style mag Hong Kong Tatler, in an article by his owner, writer Hing Chao, charting the history of what happened to this breed to turn it into this... what's called the "meatmouth" Shar Pei.


The claim is that the original Pei was bred with bulldogs, pugs etc to exaggerate the wrinkling to appeal to the Western market.  In other words, what you see in the showring and pet market today is a mutt... not the real thing.

I love that the original breed has been featured in a top style mag... it sends out a strong and clear message... Want a proper Shar-pei or the canine equivalent of a fake Cartier watch?

There are a few bonemouths in the UK. It would be good to see more. And I would also love it if those who own them would enter them into shows to show people that there is an alternative. (Please let me know if you do so I can come and watch.) We were very much hoping to feature this breed - and the latest research regarding the link between the excessive wrinkling seen in the meatmouths and Shar-pei Fever - in Pedigree Dogs Exposed - Three Years On. Sadly, we ran out of room.

I was delighted recently to be invited to join a very health-focused Facebook group dedicated to improving the health of this breed. Clearly there are good and committed breeders out there.

It is not impossible to breed a long-lived, healthy meatmouth Shar-pei. But it is harder.
Posted by Jemima Harrison at 17:33 61 comments: