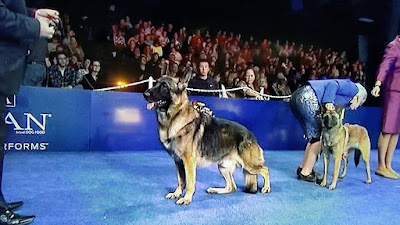 This is Ch Kysarah's Pot of Gold. Despite the fact that his hock is on the floor, he was awarded Best of Breed at the National Dog Show in the US three weeks ago.

This winner is "among the worst I have ever seen," says one of the world's leading canine locomotion expert, Professor Dr Martin Fischer, author of Dogs in Motion, published by the VDH (German Kennel Club).

There has been quite a lot of chatter about this dog on social media - some saying the dog is awful; others maintaining that he is an improvement on other American showline GSDs. You can see his pedigree here.

Here's a video of him in the ring at the NBC-televised National Dog Show.

If you don't look too closely at him on the move, he looks OK - and the American show dogs don't have the hinged backs you see in GSD showline dogs in Germany, UK and elsewhere.  But they do have paddling-fronts and unstable rear ends which become all too obvious if you freeze the action. Have a look at these frames from this video.* 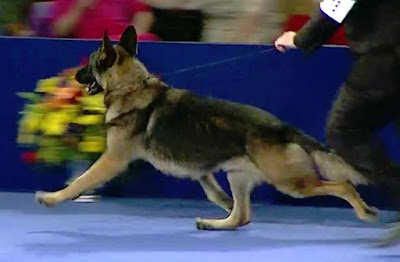 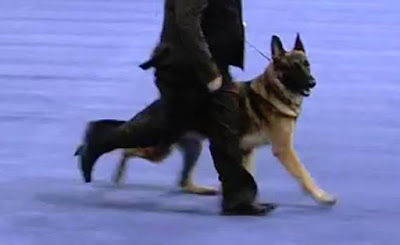 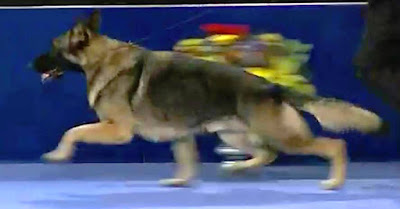 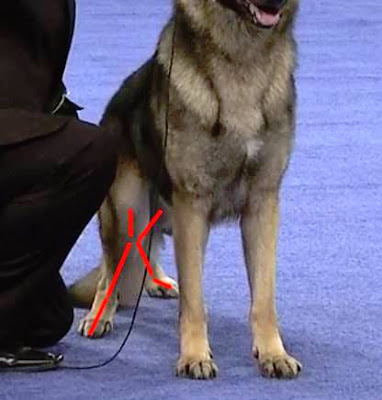 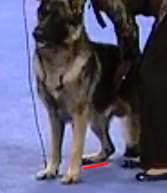 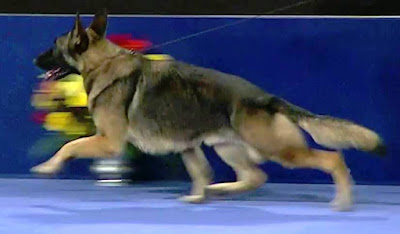 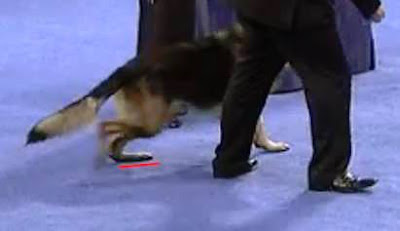 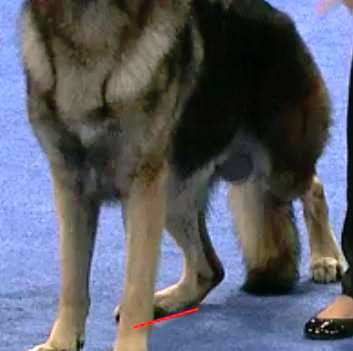 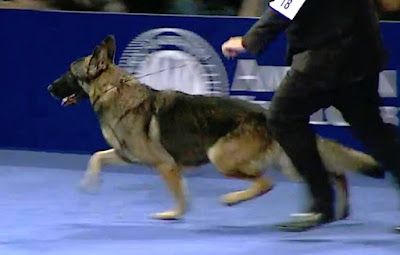 "His movement hurts almost all biomechanical principles of dog locomotion," says Professor Fischer. "It is not only the almost plantigrade position of the hind foot but - as we know from the hundreds of dogs we have studied - it is also the position of the thigh. The hind foot and femur [thigh bone] move in matched motion, which means that the femur in this dog is placed in a most unfavourable, almost horizontal, position at touchdown.

"Moreover, it is almost certain that any kind of storage of elastic energy in the hindlimb is gone with such a plantigrade position. I cannot definitively not understand how such a dog could have been selected Best of Breed."

These are strong words from Professor Fischer, who is Director of the Institute of Systematic Zoology and Evolutionary Biology at the University of Jena. But I thank him for speaking out because show breeders of the German Shepherd - in the show-ring on both sides of the Atlantic - must reconsider what they are doing to this incredible breed.

The saddest thing is that this dog is by no means the worst - although perhaps the worst actually awarded Best of Breed at a flagship show.

No other breed of dog walks on its metatarsals. A dog's hock should never hit the deck when it runs in a straight line. Moreover, it has been proven to make the dog mechanically less-efficient - by Professor Fischer and others - even in the less extreme dogs.

The problem is, of course, that it is so very difficult to convince GSD show-breeders that the way they're breeding the dogs is wrong, as anyone who has ever tried can testify.

What we need is a cohort of experts with real standing, such as Professor Fischer, to lobby kennel clubs and breeders for change.

These pictures landed in my inbox this week, btw - the collateral damage to breeding extreme dogs. This is a 7-mth-old show-bred youngster handed into a GSD rescue in Los Angeles last year; presumably because the breeder couldn't find a buyer for him. (Source here.) 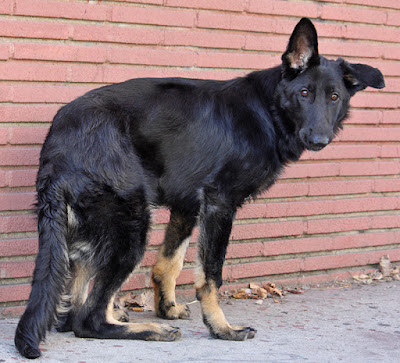 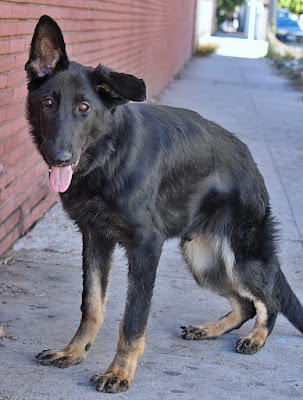 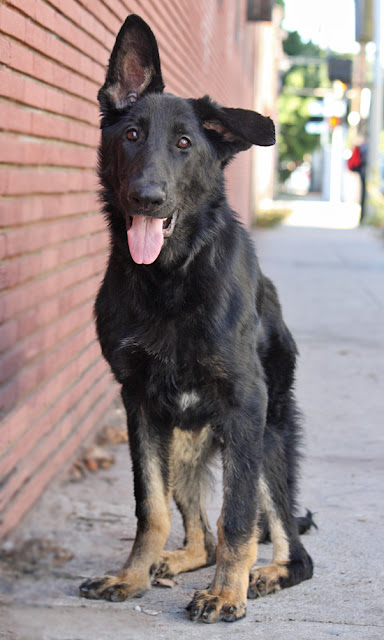 Beautiful dogs, failed by the humans who purport to love them the most.


* thank you to Ann Cardon for pulling out these freeze frames
Posted by Jemima Harrison at 11:38