GSD history buffs - can you solve this mystery? 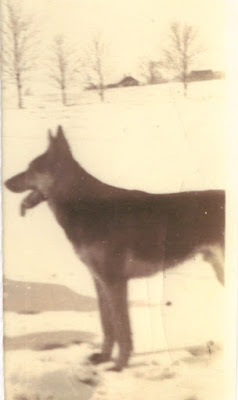 My last post on Ch Kysarah's Pot of Gold has become the blog's most viewed post of all time with over 50k views in just 24hrs. So now I have the attention of the GSD community could anyone help solve this mystery?

The above photo was sent to me two days ago by an American called Dave Thorpe.

A quick Google throws up this:


"The first recorded reference to a GSD in America was when Mira of Dalmore (never registered) Property of Dalmore Kennels of H.A. Dalrymple, of Port Allegheny, Pennsylvania, was Exhibited. She was first Open Class, at Newcastle,  and first open, Philadelphia. These awards were probably in the miscellaneous Classes at those shows, for we find the same bitch appearing and winning the miscellaneous Class at New York in 1907. entered as a Belgium ( sic. ) sheepdog.

"The bitch's real name was Mira von Offingen and was imported in 1906 by Otto H. Gross along with two others. How she came to be shown in Dalrymple's name is not known. After finding nobody in America was interested in the breed, Gross took Mira back to Germany.  Mira of Dalmore was never registered in the American Kennel Club Stud Book.

"In 1908 she was again exhibited in the miscellaneous Class at New York in 1908, this time entered as a German Sheepdog. In this Class she had competition, another German Sheepdog known simply as Queen being exhibited by Adolph Vogt, who won first in her class, defeating Mira. This Queen, was in all probability, in fact Queen of Switzerland(115006), of Largely Krone blood. The first GSD to be registered in the Studbook of the American Kennel Club."