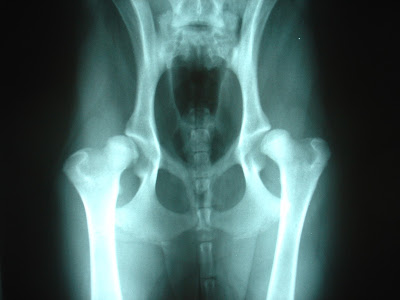 From the press release marking the event:

"Results from the Hip Dysplasia Scheme showed improvements in the median scores of 20 of the 21 most-scored breeds over the last 15 years, indicating a reduction in the incidence and severity of hip dysplasia in scored dogs."

“This data goes to show just how much of a positive effect health testing is having on the health and welfare of dogs.

“The BVA/KC Canine Health Schemes are useful tools to support responsible breeding and, as evidence from the data from the hip and elbow schemes, they are going a long way in protecting the future health of the UK’s dogs.”

“Breeders who health test their dogs should be tremendously proud that they are having such a sustained positive impact on dog health, and we would encourage any breeder who does not currently use the schemes to do so, to enable the positive results to continue.”


Well that sounds great, doesn't it? But let's have a look at the actual data for the top 21 breeds.


As you can see, while there has indeed been a reduction in hip scores, it is a very small one for most of these breeds - down just one or two points in almost 20 years (with perhaps only the Newfie and Gordon Setter showing a truly significant reduction).

And, in fact, if you look at the data provided for the other breeds in this latest report (download link), it is hard to share the KC's enthusiasm.

For the 159 breeds for which comparative data have been provided, 62% per cent have seen no recent improvement in hip scores - and in 25 breeds hip scores have actually increased!


Seriously, it's not much bang for your bucks given that breeders have spent millions hip scoring their dogs over the years.

It's no great surprise to Professor Smith who maintains the UK/OFA/FCI hip schemes are fundamentally flawed. It was in response to this that he developed the alternative PennHIP scheme which measures hip laxity. PennHIP  has been shown to be more effective in identifying which dogs which will go on to suffer degenerative joint disease. (Smith GK, Lawler DF, Biery DN, et al. Chronology of hip dysplasia development in a cohort of 48 Labrador retrievers followed for life, Vet Surg 2012; 41: 20-33)

"The hip-extended radiograph is simply not a good phenotype on which to make breeding decisions. It should be abandoned in favor of using the PennHIP DI. It’s that simple," insists Smith.

That said, not everyone agrees. There has, for instance, been considerable improvement in some breeds in Finland using conventional hip-screening - with the indication being that when there is breed-wide selection against poor hips, it can be effective (Finnish report here.) 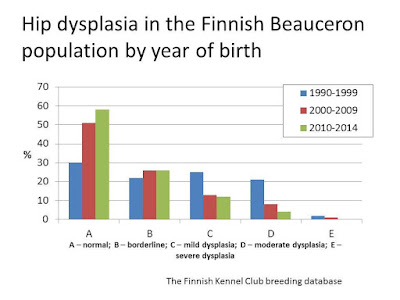 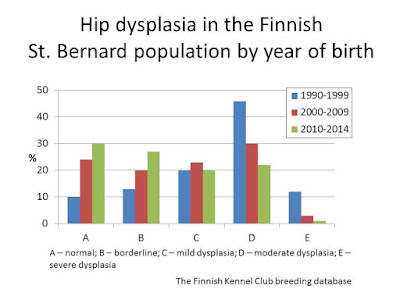 Longevity has improved in the St Bernard in Finland, too - it's thought because far fewer dogs are being euthanised because of severe hip dysplasia.  In the 1990s, Finnish St Bernard's died on average at 5 years old. In the 2000s, it had increased to 7yrs 1mth - and today, it is 7yrs 6mths - quite an achievement.

Finnish geneticist Katariina Maki says: "All you have to do is get reliable results and choose breeding dogs from the better half of the population."  In fact, Maki says you don't even have to breed only from animals from the very best hips; just those that are better than the breed average. Progress will be slower, but doing it this way helps maintain genetic diversity.

I had a discussion about PennHIP a few years back with Tom Lewis - then at the Animal Health Trust, now a full-time geneticist at the Kennel Club. Lewis acknowledged that PennHIP might be better but was adamant that the BVA/KC scheme was still useful and would become more useful with the introduction of estimated-breeding values (EBVs). These launched at Crufts earlier this year and are available for 28 breeds. Lewis also pointed out that it was very hard to justify throwing away 50 years of data collected under the existing scheme.

I have some sympathy with that... but it does make you wonder how much better those EBVs would be if they were built on PennHIP data rather than on the current scheme.

Incidentally, I have gone back to the BVA to ask for more comprehensive historical hip-score data from which to better assess the success of the scheme, and will report further when I get it. Perhaps if it made more grading information available we could see more of an improvement?

In the meantime, I've discovered something else interesting about the BVA/KC hip scores - something every breeder should know.