Does the K in KC stand for (north) Korea?

The schedule for Crufts 2012 is now available online and I see the Kennel Club has tried to beef up rules regarding photography.

Here's what it says:

Clearly, the KC is very worried about those horrid people singling out unhealthy-looking dogs and posting them on blogs or YouTube or, heaven forbid, giving to BBC documentary-makers. And it would have you believe that those who want to photograph problems are the ones at fault (as opposed, that is, to those breeding, exhibiting and awarding them prizes).

The addition to previous rules regarding photography is this line:


"The Organisers reserve the right at their absolute discretion to confiscate cameras and/or films for infringement of this condition. "

I do appreciate that it is uncomfortable to have problems highlighted but this is a dog show where dogs are presented for exhibition and judgement. To try to put measures in place to ensure that only nice, positive, celebratory things about dogs are reported or photographed is censorship. And, moreover, pretty much impossible given the number of visitors to Crufts - almost all of which will have a camera, even if only on their phone. I should point out, too, that while individuals in certain circumstances have a right to privacy (although that's arguable if you've chosen to exhibit your dog at an event attended by thousands of snap-happy members of the public), dogs certainly don't.

My suggestion to the KC is that they man-up here. The correct PR advice is, surely, for them to welcome everyone and actively encourage anyone who records something that appears to be highlighting a health or welfare issue to discuss it with the KC.  And if, say, the photograph or recording shows prizes being awarded to a Basset Hound with ectropion or a Chinese Crested with obviously sore testicles because they've been shaved, or a Peke that can barely walk or a Bulldog or Pug with a massive overnose wrinkle, for the KC to not just point out the positive steps they are doing to deal with them (and there are some) but, where appropriate, to be unafraid of issuing a statement saying that they are extremely disappointed that a dog with such an obvious problem is still being rewarded in the show-ring.

The KC has vet checks for the Best of Breed winners of the 15 highlighted breeds starting at Crufts and this is a good move (although I am concerned to hear that the vets are not allowed to put a stethescope on the dog). This should mean that dogs with obvious problems will not win.  Which could mean that there won't be a BOB winner of Neapolitan Mastiffs at this year's Crufts.  I have yet to see one without ectropion which, thanks to input from veterinary opthamologist Professor Sheila Crispin, has been included as a disqualifying problem.
Posted by Jemima Harrison at 12:50 158 comments:

They've got their knickers in a twist over at the Stop the BBC Making Another PDE Facebook site over something I said when I was being interviewed by Victoria Stilwell last week.

But of course they're wrong. What I pointed out in the podcast was that there are different forms of PRA in different breeds, caused by different mutations. There's cord1 (found in some Dachshunds and English Springers), prcd (found in a lot of breeds, including Cocker Spaniels, Golden Retrievers, Labradors and Tollers), rcd1 (Irish Setters), rcd2 (Smooth and Rough Collies), rcd3 (Welsh Corgi), rcd4 (Gordon + Irish Setters),Type A (Miniature Schnauzer) and X-linked (Samoyed).

All these mutations are recessive, meaning that both parents must carry and pass on the mutation to their puppies for the pups to be affected.

Obviously, if you mate a Golden Retriever with a Labrador, there's a risk to the resulting pups.

But you can mate two carriers (or even affecteds) of two different breeds that don't carry the same form of PRA - eg a Springer to a Cocker  - and the pups will not be affected (although of course could be carriers so one would have to test for both mutations if you breed on).

The only exception to this is with a dominant form of PRA found in Bullmastiffs and Mastiffs.

So thank you for the suggestion that I talk to Optigen. Of course I have - and to the Animal Health Trust which has found so many of the other PRA mutations (and is still working on others).
Posted by Jemima Harrison at 11:08 51 comments: 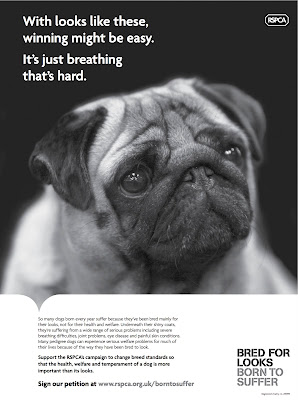 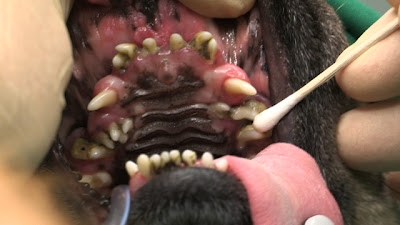 Add 22/12: here's the Kennel Club's response to the RSPCA's new campaign - essentially an insistence that the breed standards are not to blame.
Posted by Jemima Harrison at 19:21 148 comments: 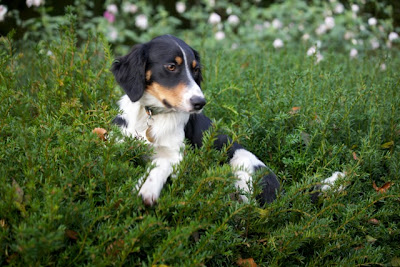 And television loves an empty chair.
Posted by Jemima Harrison at 12:09 57 comments: