Bullmastiffs - as "gud" as it gets? 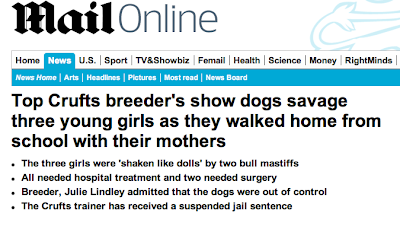 The Daily Mail today carries the story of how the current UK Bullmastiff of the Year 2012, Hyerdunscar As Gud As It Gets got loose from his pen with another dog last March and attacked a woman and three children walking along a pavement.

Breeder Julie Lindley quickly destroyed both dogs and is, the court heard, full of remorse. I am sure she is. But how on earth did she come to have dogs with such a dangerous temperament? That kind of behaviour simply doesn't come out of nowhere.

Now the Bullmastiff is a guard dog and is bred to defend its territory. But "a serious and sustained" attack of three children off their own territory?

The KC breed description describes the Bullmastiff  as "makes a happy companion who is totally reliable both physically and mentally". Clearly these dogs were not.  And although it's clear there were some mitigating circumstances here (it's thought the dogs had been let out by someone trying to steal them) the dogs still bit three children and, according to evidence presented in court, shook them "like dolls".

Now temperament is paramount for many breeders - but not all.  And it's possible to get away with a poor temperament within in a system that is still focused primarily on looks. Sure, the show-ring conditions dogs to trot round a ring without attacking other dogs and it teaches them to be fondle-friendly enough for a judge to grab their testicles and not have their faces bitten off. But often not much else. Indeed, in attempting to maintain some semblance of the dogs' original qualities without the true test of actually doing the job properly (whether guarding or herding or retrieving or going to ground) the danger is that showdogs can end up with less stable temperaments than their working cousins.

In Sweden and some other countries, working breeds are asked to take temperament/mental stability tests. The results are published and taken seriously by breeders in their breeding decisions.

With new calls by MPs to extend the breed ban to more breeds, I suggest the Kennel Club acts quickly to introduce temperament tests for working breeds here too - and encourage the Clubs to promote them. They might just have prevented this tragedy, and would be a proactive and welcome addition to current requirements for Accredited Breeders (of which Julie Hindley is one).

The KC might want to suggest that Julie Hindley removes the glowing reports of Theo on her website, where she is still advertising the dog at stud.

Part of the blurb there reads: "Theo is very exciting dog he is such a showman he never lets me down and is very hard to ignore in the ring We can only dream of what else is to come from this boy." 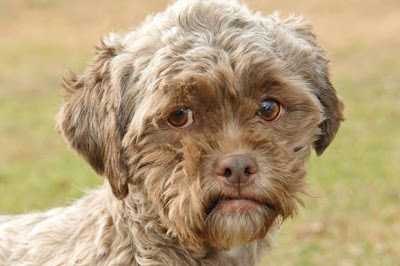 This dog's pic is currently doing the rounds on the Internet and elsewhere as "the dog with a human face" - a Shih-Tzu x Poodle apparently, although I can't see much Poodle in him.

The reason that the image of Tonik - in rescue in Indiana in the US  - has proven so "grabby" is because humans are genetically programmed to respond to faces - and particularly baby-like faces.

This may be good for babies, but it's terrible for dogs. It's the reason why flat-faced breeds have been developed and endure, despite the cataclysmic impact this so often has on the health of these breeds.  We find them appealing - and continue to find them cute even when people like me keep banging on about how awful it is for the dogs.

The Indiana rescue that has Tonik says he is in good health and microchipped - no mention of whether or not he is neutered. Hopefully so, or there'll be those wanting to start a whole new line of money-making mutts that look like humans.

And how about this for the embodiment of the problem? As a friend of mine commented this morning.. many levels of wrong. 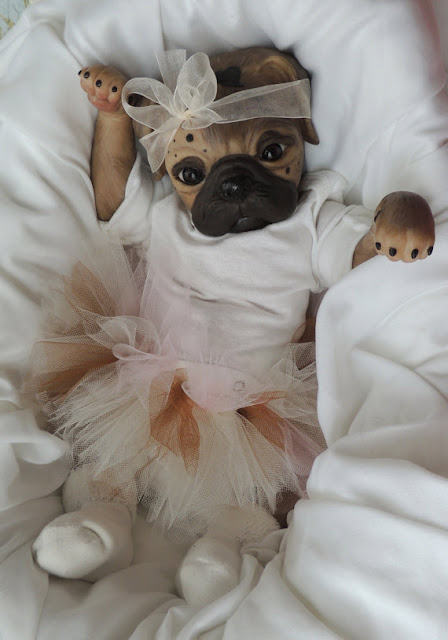 But please don't. Obviously. Unless it's a straight substitute for buying a real one. And even then please keep it in a crib locked box.

A huge number of bulldogs are mated like this - and probably most of them in countries like the US where artificial insemination (AI) is more routine than it is in the UK due to the geographical distances and the fact that it is much easier to ship a syringe of semen than it is a whole dog.

This is especially true for a the Bulldog whose physical shape so often prevents a natural mating. Even if it didn't, you'd have a tough job getting a Bulldog from one side of the States to the other  by anything other than a car. The breed is so susceptible to dying during air transit that many airlines have banned them. Most Bulldog bitches, therefore, have to endure this indignity - while Bulldog semen is also collected by human hand.

The Bulldog has just made the AKC Top 5 for the first time. It is a breed for which the average age of death in most half-decent surveys of the breed is  five years old - half the average of what most healthier breeds can manage. (In fact, the AKC figures probably reflect this necessary turnover to meet the demand.)

It is a bloody disaster for these dogs.  Have a look at - and a listen to - this video of a Bulldog youngster in the US,  rather astonishingly sub-titled "Having Fun at the Yard".

Now will you please stop breeding them and buying them?

Everyone involved in the Bulldog business is guilty of causing unacceptable suffering - even if the dogs you produce personally are a bit better than this one.

I was recently asked by an American dog person planning an outcross programme for one blighted breed why I was so against artificial insemination.

The reason is that it circumvents natural sexual behaviour patterns that have developed as part and parcel that ensures survival of the fittest.

“Human assistance not only tolerates but also encourages males that in nature would never stand a chance to mate,” say Johan and Edith Gallant, authors of SOS Dog: The Purebred Hobby Re-examined (now also available on Kindle in both English and German). “Of course such matings may produce the desired color, the chiseled head that one is after or improve on any of the external features described in the breed standard, but the chances that it is instrumental in improving mental stability and true canine behaviour is remote.

"[It] brings two individuals together that most likely would not mate under natural conditions, the offspring that they produce are in fact contrary to nature and improvement of the breed concerned. When we are faced in modern dogdom with an endless list of complications in canine reproductive behaviour and with general behavioural disorders, their origins can be found to a large extent in human-induced mating, which in many cases has been applied over consecutive generations."

In the wild, it is usually the females who choose their mates. This is certainly true for the wolf, with whom our dogs share a common ancestry. And as nature favours the fittest/most adaptable, the females choose the most able and – it has been shown – often the most genetically diverse (i.e less related) mate. This is not something that can always be ascertained from a co-efficient of inbreeding which gives only a statistical measure of relatedness.

In reality, individuals can be much more or less genetically similar due to the genetic deck-shuffling that happens with every generation. It is thought, for instance, that female wolves are able to distinguish between two brothers - on paper identically related; in reality not. This may be a critical mechanism in ensuring the survival of closed, isolated populations in the wild - and also in dogs which are artificially isolated by us wishing to preserve individual breeds.

Of course, I’ve heard dog breeders maintain that alpha male wolves mate with their daughters, but this is rarely the case. That’s because female wolves do not come into oestrus until two years old and often do not raise their first litter until they are four or five. By this age, their father is very likely to have been deposed by a younger, stronger, unrelated successor from another pack who has challenged and won the right to reproduce.

Now dogs are not wolves, even if genetically so very similar. It is obvious by some bitches’ utterly flagrant flirting that they can be shameless hussies compared to wolves, who often pair for life. But, still, bitches often do show a preference and we should show some respect for this where we can - as, indeed, some enlightened breeders already do. The bitch may know something about the mate that you have chosen for them that makes him an unwise choice.  And, believe me, she does not care how many fancy titles he may have if she doesn’t think he cuts the mustard.

“Bitches don’t like breeding down to lesser dogs,” says Don Turnipseed, an American breeder of hunting Airedales who allows his bitches freedom of choice .  “The dogs have more sense than people in this case”.

Artificial insemination circumvents another of nature’s safeguards too – the demanding journey sperm has to embark on in order to be the one that fertilises the ovum; a journey that so efficiently weeds out the weaklings.

Of course, there are occasions where AI is justified – particularly if is to bring in some new blood from a valuable line from another country. But it should always be done with great care and only when both parties have already proved that they can reproduce naturally – as, indeed, is the current sensible Kennel Club requirement.
Posted by Jemima Harrison at 11:00 28 comments: