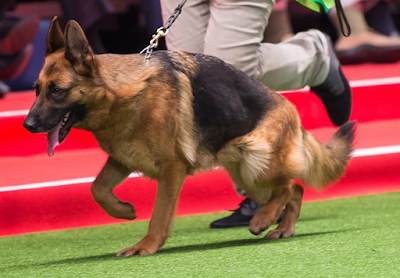 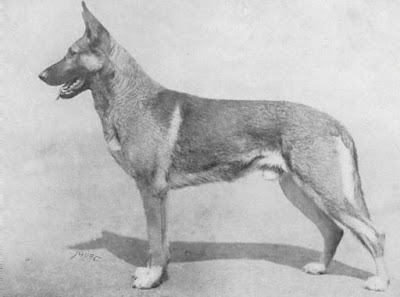 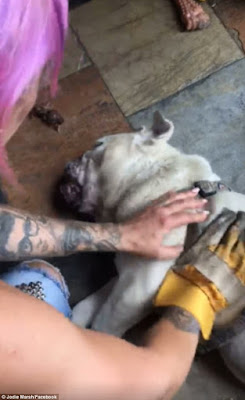 Yesterday, UK media personality Jodie Marsh - a glamour model and bodybuilder - posted this video of herself on Facebook reviving her lifeless Bulldog, Louie. It's already been seen by millions.

Jodie revealed in the comments that this dog collapses every two months or so and each time she has brought the dog back from the dead by doing what you see above. Moreover, she tells everyone to watch because one day it may save their own dog's life.

Her fans think she's a hero.

I think she's irresponsible and a danger to dogs.

Despite this being a regular occurrence, Ms Marsh shows no sign of having availed herself of the many dog first aid courses available that show owners how to do this properly  (see bottom of page)..

Even when they are panting, they still take in air through the nose - they just exhale through their mouths. (For more info  on how dogs breathe/cool themselves, see this excellent article from Carol Beuchat over at the Institute of Canine Biology)

Now dogs are not quite the obligate nose breathers horses are, but dogs only breathe through their mouths - and very inefficiently - if they are not able to get enough oxygen in through their noses. If you block off the nose on a normal dog, they will go into a meltdown panic.

Jodie is clearly managing to bring her dog round each time he collapses,  and she is doing the right thing in clearing the blockage from his throat, but she is putting her dog at further risk by doing the rest of it wrong. Wiggling a limp dog's body about a bit while blowing air into a dog's mouth is not CPR. The danger is that in copying what she does, rather than what they should do, a dog that would otherwise live will die.

Jodie isn't totally clear what causes the dog to collapse so often - she mentions that the dog choked on a treat this time, but  also refers to overheating and to 'tracheal collapse'. All are common-enough in Bulldogs and other brachycpehliac (flat-faced) breeds - as is keeling over from exertion or stress. However,  she says the root cause is that the dog has an elongated soft palate that blocks his airway. This, too, is very common in Bulldogs and is the reason why so many sound like a freight train.

The technical name for this sometimes-life-threatening laborious breathing is "stertor" and the sole reason Bulldogs and other brachycephalics suffer from it (and other airway compromise) is because humans think it's cute to breed a dog with no muzzle, essentially crushing all the flesh that would be appropriate for a longer muzzled dog into a much smaller space.

There is surgery to fix this that can transform these dogs' lives. But, worryingly, Jodie reveals on her Facebook page that she thinks the operation  "is a con" and claims it costs £4,000 (about four times the average real cost).  Instead she would prefer a life of respiratory compromise for her Bulldogs (some of which she admits have died at three years old). 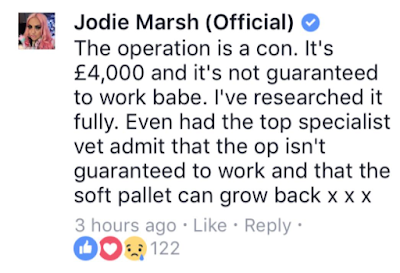 Bulldog Louie is a 13-yr-old rescue and anaesthesia has risks for Bulldogs and older dogs, so one can  understand why Ms Marsh has not opted for surgery for this particular dog, although it would have been less of a risk two years ago when she first got him. What a kindness it would have been for this dog who has to be watched like a hawk every time he eats or when out for a walk in anything other than cool weather.

It is true that the surgery is not always 100% successful - but in the majority of cases it offers at least some respite (and often a great deal of relief) to these dogs. It is, at best, irresponsible to put others off what can be life-saving surgery. At worst, it could lead directly to another dog's death.

Jodie claims it's a con because the soft palate grows back - in fact not true. Scarring from the op can go on to cause problems later on, but modern techniques minimise this.

“This is a very distressing video that demonstrates just how serious BOAS (brachycephalic obstructive airway syndrome) is as a condition for those dogs living with it," says Gudrun Ravetz, President of the British Veterinary Association. Gudrun praises Jodie for highlighting the dangers of walking flat-faced dogs in hot weather and the choking hazards that eating can present for dogs with an abnormal soft palate, but adds:

“No dog should have to endure the distress of regularly collapsing, though sadly this is a reality for many flat-faced dogs. We would strongly advise anyone with a pet suffering these symptoms to talk to their vet urgently to agree the best way to ensure the health and welfare of their pet. This may include opting for surgery and will definitely include taking special measures in hot weather.

“BVA has been highlighting the significant health problems suffered by flat-faced dogs, such as bulldogs, and asking potential owners to choose healthier breeds or crossbreeds.”

Ms Ravetz also commented on the use of CPR on dogs.

“In emergencies an owner can give CPR until veterinary care is available. This mouth-to-nose resuscitation should only be used if the dog has stopped breathing and has no pulse. You can use your fingers to feel for a pulse at the top of the inside back leg. We would advise owners to take veterinary advice, or attend a veterinary-led course, to learn how to deliver CPR in the safest way.”


The BVA recommends owners to be cognisant with the first aid advice offered by veterinary charity PDSA, which recommends the ABC resuscitation method for dogs until you receive veterinary assistance:

Jodie clearly loves her dogs - and has two perfectly sensible Rottweillers.  It always astonishes me that people who are obsessed with their own looks and take so much trouble to keep fit are drawn to Bulldogs.  Whatever the reason, she needs to think carefully about continuing to inflict air hunger on dogs she loves when a veterinary surgeon's knife can relieve the suffering.

Better still, she should stop supporting the breeding of Bulldogs in their current, compromised form.  Yep, even rescuing them plays a role in perpetuating their existence, especially if you're a celebrity.

If you would like to learn how to save your dog's life in similar circumstances, please check out the excellent courses from Dog First Aid UK.

Looks like Jodie has accepted an offer to do a proper first aid course... Great news.

Very sadly, Louie was found dead in Jodie's garden today. RIP Louie... May you be re-incarnated as a dog with a muzzle.