These timed photographs show what the photographer who took them alleges was the sum of the vet check of the Best of Breed Neapolitan Mastiff at Richmond Championship Show last Saturday.

The photographer maintains that vet Erik D'Arcy-Donnelly never got up from his desk and that the vet check took less than two minutes, including writing the form which gave the dog a Pass.
The vet check for the Neapolitan Mastiff covers eyes, ears, skin and a soundness check during which the vet is supposed to ask the dog's handler to move the dog up and down.

But, according to the photographer, vet Erik D'Arcy-Donnelly remained seated throughout on the other side of the desk from Vallino Too Hot To Handle and owner Sean Platts.

"I spotted Sean Platts and his dog walk from the rings in front of the trade stands towards the vet's office, accompanied by a KC official. It was a warm day and the door was open, so I thought it would be interesting to take some pictures of a vet check. To my astonishment, the vet never got up and, less than two minutes later,  Mr Platts emerged waving his Pass.  I did not see him examine the dog and there was no room inside the vet's office to move the dog. I was quite shocked by what I saw."

The video below shows vet Nick Blayney demonstrating how the vet check should be conducted. It includes a hands-on examination of the dog.


I contacted Erik D'Arcy-Donnelly - who breeds and shows Border Terriers  - to ask if he would like to comment.  I did not initially send him the pictures. His response: "I would like to reassure you that every aspect of the Veterinary Health Check for all of the Category 3 breeds on Breed Watch was carried out in full to the guidelines specified by The Kennel Club."

I then sent him the above photographs and invited him to comment further. He has not so far responded - but if he does I will add it here.

Mr D'Arcy-Donelly is also a duty vet at Windsor and Newbury Championship Shows.

The dog's owner, Sean Platts, also insists that everything was done by the book - including that the vet asked him to move the dog up and down outside the vet's office after the eyes/ears/skin check.

Mr Platts says he is pro the vet-checks in principle, although thinks they should be for all breeds.

When shown these pictures, Mr Platts says: "These pics are from when I returned to the vet's room from being outside after the movement, and in the room I'm stood waiting while the vet writes his report. So your spy was late with the camera and missed the exam and movement part."

Not so, says the photographer. "I had been there for some time with a friend who was packing up. There was no way I would have missed a Neapolitan Mastiff being moved up and down outside of the vet's office. I saw Mr Platts approach with his KC escort, he entered the vet's office and two minutes later emerged with his Pass. The KC official remained outside throughout. The vet did not move from where he was sitting at the desk and there was no room inside to move the dog. In fact, there was an obvious quiet place to one side of the vet's office which was the logical place to move the dog. It was not used for this dog."


So, what did happen here?

The exis data on the photographs confirm the timings - and although not impossible to fake, there is no reason for the photographer to have done so. The photographer says it is impossible for him to have missed a Neo being moved outside the vet's office just prior to these pictures being taken.  He explains:"I had been there for several minutes and, as a photographer, you are scanning all the time."

This is a photographer who, essentially, supports and is part of the dog show world. They sent me the pictures because they were shocked. But, of course, it’s one person's word against two others.

To be clear, I am not suggesting that the Platts' dog would have failed her vet check. The Vallino kennel is one of the more health-conscious Neapolitan Mastiff breeders.

Does it matter if the vet check was skimped? Well, yes it does.

The vet checks were introduced at Crufts in 2012 for the Best of Breed winners for the high-profile breeds. We know most people in the show-world think they’re pointless and offensive. And, let’s face it, they’re cursory. It's no secret that I would like them to be a whole heap more thorough.  Nevertheless, they have led to fewer dogs with obvious problems being put up and that is a good thing, despite the continuing protests.

As Caroline Kisko says in the video above, the vet checks are intended as independent confirmation that winning dogs are sound in body; designed to reassure those outside of the show world, not those within it.

As such, it's important that they are always conducted with the utmost care.
Posted by Jemima Harrison at 23:43 70 comments:

Breathlessness: not wagging but drowning

Struggling to breathe can cause animals significant suffering, says a new paper from researchers at Massey University in New Zealand.

This might seem obvious, but breathlessness and its specific welfare impact on animals has not been well-articulated in the veterinary literature before.

"Breathlessness, in its various manifestations, has been studied extensively in human beings who report that it can be extremely unpleasant and distressing," say authors Ngaio Beausoleil and David Mellor.


"At least three qualitatively distinct sensations of breathlessness are recognised in human medicine – respiratory effort, air hunger and chest tightness... Each one occurs in a variety of pathological conditions and other situations, and more than one may be experienced simultaneously or in succession. However, the three qualities vary in terms of their unpleasantness, with air hunger reported to be the most unpleasant."

The authors found that brachycephalic airway syndrome in modern dog and cat breeds "increases respiratory effort at rest and likely leads to air hunger during exertion" - in other words,the most unpleasant kind of breathlessness reported by humans.

"Air hunger is the sensation experienced at the end of a long breath hold. It is often described as ‘increased urge to breathe’, ‘shortness of breath’, ‘needing more air’, ‘unsatisfied inspiration’, ‘smothering’ or ‘suffocating’. It is always reported to be unpleasant, and even moderate air hunger is more unpleasant than maximal respiratory effort ."


Indeed, the authors put the welfare impact of severe brachcypehalic airway syndrome in the same category as drowning or being deliberately asphyxiated.

While this paper explores the issue of breathlessness across the board (i.e.not just due to conformation), the authors are currently preparing a second paper exploring the extent and impact of brachycephalic airway syndrome on welfare in dogs and cats.

Hopefully, this will increase the pressure on breeders, Kennel Clubs and dog owners blind to the problem in pursuit of a distorted sense of "cute" to take the issue more seriously.

Join in the discussion on the new Pedigree Dogs Exposed Facebook page.
Posted by Jemima Harrison at 13:15 16 comments:

The truth behind the Cambridge "very large cat" The media loved the story recently of YoYo, the Basset Hound, who had circumvented rules banning dogs at Selwyn College, Cambridge by being classified as a "very large cat".

Nothing like a bit of good-old fashioned British eccentricity.

There's been a few sniffy comments , though - with several people suggesting the dog is a cross, not a purebred Basset. 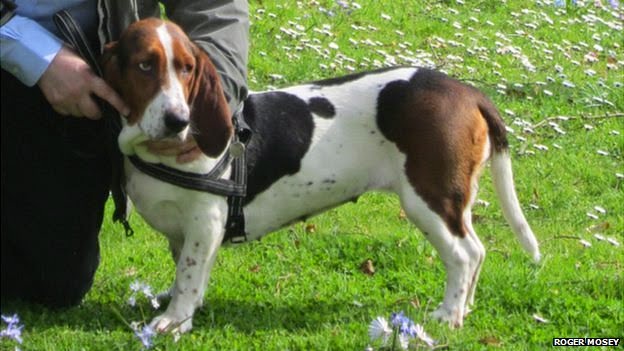 But I can exclusively reveal that YoYo is the real-deal. She is a retired working pack hound from the wonderful Albany Bassets  - a dog who has as much right to be called a Basset as any of the baggy, saggy show dwarves who trip over their own ears.

Although, actually, YoYo was retired and re-homed because she is a little long in the leg, even by Albany standards where the hounds are much more athletic than their show cousins. 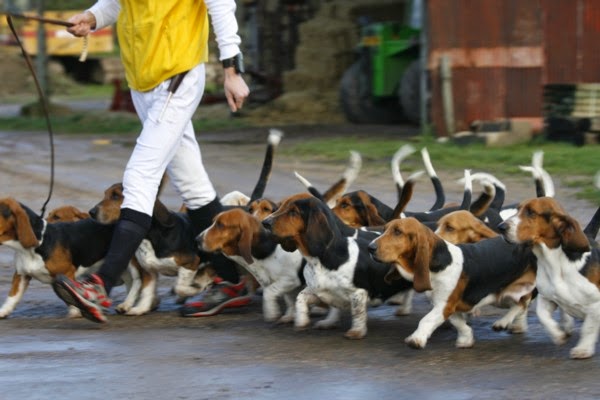 "She was a lovely hound, very well behaved and an excellent working hound," says the Albany's Alison Jeffers.

"The only reason we re homed her was because she is taller in the leg than the majority of our hounds and therefore too fast. We try and keep a very level pack so when out working, they all stick together and work as a team. Slower or faster hounds have to go, the outcome is to become a pet dog!"

Here's YoYo in her working days. 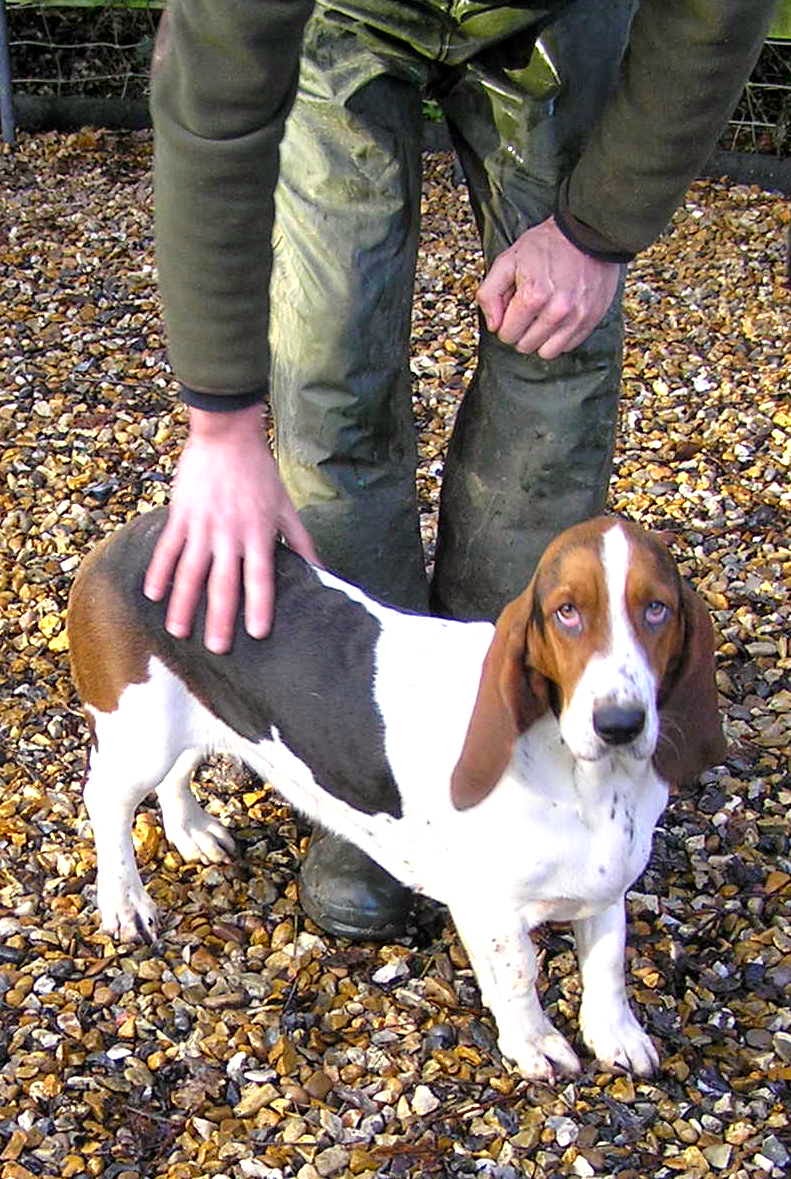