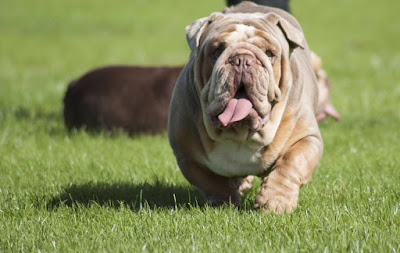 The above dog - Mr Chubbs - is currently being pimped as a desirable stud by a Bulldog breeder called Adam Roche from Manchester, a man very happy to feed a new demand in the UK for 'extreme' Bulldogs regardless of the cost to the dogs.

Let's face it, being born a Bulldog is bad enough at the best of times. Only 15% of them can breathe like a normal dog. Some drop dead from overheating in even mildly warm weather. Many suffer allergies and intractable skin infections. Their joints are deformed by design. Their mouths are a jumble of overcrowded teeth and infected gums. They often cannot mate or give birth naturally. They die on average at six years old.

While there are a handful out there that lead reasonable lives - and certainly, like most dogs, many Bulldogs bear the encumbrances foisted on them with good grace -  the Bulldog is a breed that is defective by design.

So the idea of taking this effed-up template and effing it up a bit further is incredibly distressing.  It's a trend that started in the United States and now it's here - feeding a growing UK market for squidgy, squishy-faced, waddling dogs, usually in non-recognised colours like Mr Chubbs.

These are dogs bred deliberately to be gross. Their owners boast of "lots of loose skin" and "enormous nose ropes".

And it is no longer fringe. The Kennel Club is registering them - in their hundreds if not thousands. Don't believe me? Join the Rare Bulldogs Facebook page and weep. It's a bizarre world where breeders call the dogs they breed "productions" and the worth of a Bulldog is measured in the size of its nose rope, the shortness of its back and legs and how thick-set they are. A quick trawl reveals loads of people in the UK posting really dreadful-looking Bulldogs, including its two British admins.

Pets4Homes, too, is awash with these dogs. 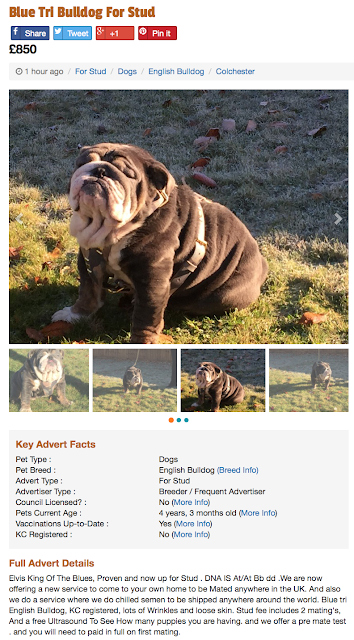 Elvis isn't KC registered (despite the claim in the blurb above), but many are. 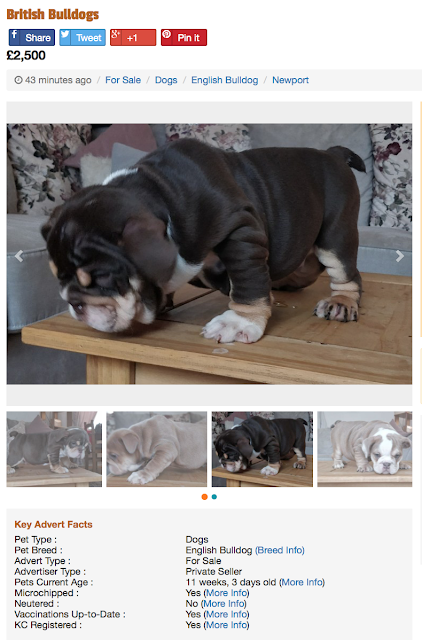 Mr Chubbs was born in the US on 29th September 2014, and was imported to the UK and registered by the Kennel Club as Mr Chubbs at Dezinerbullz Essex UK. This is a breeder called Diego Sanchez who runs a slick website (forgive me if I don't link to it) that claims that "health and temperament" are their main priorities.

It's bullshit. There is no evidence that Mr Chubbs has been health-tested - either when he was with Sanchez or since he's been bought by Adam Roche of "Rochebulls".

The Kennel Club registered Mr Chubb's first litter on 2nd November 2015 so he was first used at stud when he was under a year old. He's had 20 other KC registered litters since then and likely any number of non-registered ones.

I have had brief exchanges with both Sanchez and Roche on Facebook - begging them, frankly, to not breed dogs like this. But of course what does my opinion matter when they can charge so much money from peddling deformity to a gullible public buying dogs by the wrinkle?

If Sanchez is health-testing, he is keeping it quiet. The only tests advertised on the Dezinerbullz website are DNA tests for colour - because his speciality is rare' colours, and chunky, squat dogs like this.

Here's another, almost unrecognisable as a Bulldog but hey... he's KC registered.

Adam Roche, meanwhile, does seem to have one health-tested stud. But here is what he's pimping. Disgusting.

So what do we do?

Well, we could urge people to not buy them - hell, no one should buy any Bulldog (unless one of the more moderate alt-Bulldogs)  - but that's clearly not working. Registrations continue to rise.

We could urge people to not breed them? Not while they can make so much money out of them we can't.

We could ask the Kennel Club to no longer register them, perhaps?  This is a stance I've taken in the past, but the reason I've been able to find out that Mr Chubbs is not health-tested and has had 21 KC-registered litters is because the KC keeps records and makes them publicly available. It enables us to track them. Plus, this crowd is ahead of the game - they've recently launched a brand new Kennel Club promising to register any breed of any colour. (Click and wince here.)

We could make it illegal to breed dogs like this? Well, good luck with that - where on earth would you draw the line?

Truth is, there IS no single answer as much as I would love there to be.

That doesn't mean we just give up.

We need to keep publicising the problems. We need to encourage those who have bought one of these dogs and paid a heavy price to come forward and talk about it.  My CRUFFA campaign and vets need to continue to persuade advertisers to not use any extreme dog (and that includes KC standard Bulldogs, Frenchies and Pugs) Although it's impossible to make their breeding illegal, it is not impossible to beef up legislation to financially clobber breeders who sell a dog that goes on to suffer or die from a breed-related issue. This is something that I understand is being worked on and it can't come a moment too soon.

Finally, a note about those 'rare colours'.  Frankly, I don't care what colour a dog comes in - even if it's evidence that there's been some sneaky cross-breeding (most breeds need all the diversity they can get).

But, with the flat-faced breeds in particular, buyers should consider non-recognised or rare colours a red flag by default - as is any advert that lists which colour genes the dogs carry. While there is rarely a health problem associated with the colour itself (whatever the 'conventional' breeders claim), it is very often a sign that the breeder cares more about colour than health.