A topline to die for? 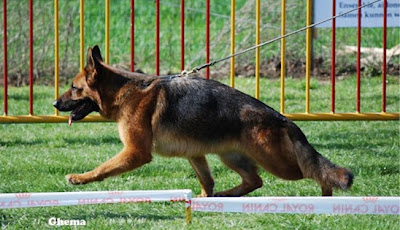 Best in Show at the National Working & Pastoral Breeds Association Show at the Malvern Show Ground in Worcestershire last weekend was Veneze Ellie, owned by John and Pauline Cullen.

Best in Show judge Ferelith Somerfield noted in her critique: "nothing exaggerated".

The 2009-born bitch is a daughter of "the great" Zamp vom Thermados who won the lot before he died prematurely of undisclosed causes (the word, though, is that it was bloat) at the age of eight.

She looks like her dad - as do most of the huge number of Zamp offspring populating the UK show-ring. This includes her half-brother, the top-winning Elmo vom Huhnegrab, owned by the same kennel, who is in great demand as a stud himself. According to the Kennel Club's Mate Select, he has now sired 159 puppies from 29 litters. 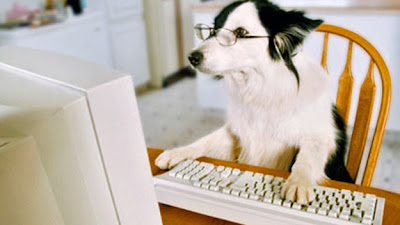 Well this is just fab... a new journal dedicated to canine genetics and epidemiology, with a genuinely unique feature: every piece of new research published by Canine Genetics + Epidemiology (CGE) will be accompanied by an extensive lay summary "so non-scientists can capture key messages for the research."

The new journal is open access which means it's free.. anyone can download and read all the articles, no subscription required.

And the venture is being supported by the Kennel Club Educational Trust, which will fund 50 per cent of the manuscript-processing costs.  This is a great use of the KC charity's funds and I wish it every success.

“I am hugely enthusiastic about the new journal, Canine Genetics and Epidemiology, " says the Animal Health Trust's Cathryn Mellersh who is on the editorial board. "The current field of canine genetics and epidemiology is an extremely dynamic and exciting discipline to be a part of, but it is vitally important that all canine stakeholders, and not just scientists, can access, understand and ultimately implement the findings from all this research.

"A key, and unique, feature of CGE is its aim to make research findings accessible to veterinarians, dog breeders and owners, as well scientists, and to facilitate this aim each published article will include an extended lay summary plus key “take home messages” for non-specialists and an educated lay readership.  I believe this aim will set CGE apart from other similar journals in the sector, and means CGE will play a central role in disseminating the research riches that the dog provides.”

Managing Editor is Lorna Kennedy who works alongside Bill Ollier at the University of Manchester with a special interest in the MHC - the area of the genome that codes for immune function.

An international and mostly-impressive editorial board includes many well-known names in canine genetics (and one or two rather notable absences such as Åke Hedhammer and epidemiologist Brenda Bonnett... perhaps just too busy?)

Can't really think of a single bad thing to say about this and I look forward to reading it.

Hopefully, this journal will become the repository for research that we are still waiting for from the Animal Health Trust/KC - such as the long-promised effective population size data on UK dogs; research that was completed ages ago but has still not been released.

You can read more about the new journal here where, inexplicably, there is a picture of a rather bemused Labrador surrounded by bubbles.

You can sign up to receive the journal's articles - for free - here.