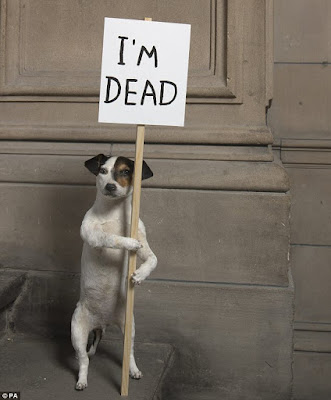 The decision by the Kennel Club to register the Jack Russell Terrier as a show-dog met with outrage when it was announced in October. (See my blog here)

Now the Jack Russell Terrier Club of GB has confirmed that the KC went ahead despite its vehement opposition and has issued a swingeing statement in response. It calls the KC move "ridiculous" and accuses the Kennel Club of embarking on a journey into "a minefield of confusion, misery and despair".

Chairman Greg Mousley also accuses the KC of ruining rather than preserving the future of the breeds in its care.

The statement in full.

We along with our worldwide affiliated Jack Russell Clubs, fought tooth and nail against the recognition of the Parson Jack Russell Terrier but the Kennel Club committee blindly went ahead. Now many years later they have realised their predicted failure and Parson Russells are almost as rare as the breed the Kennel Club started with in 1860, the Fox Terrier. They badly need a small breed to gain income!

The Jack Russell Terrier Club of Great Britain wrote the definitive breed standard for the Jack Russell Terrier 38 years ago and it has been adopted by Jack Russell Clubs worldwide, even copied by the Parson Russell Club! No doubt it will be used once again.
Along with our affiliates we have a registration system reaching back to the mid 70s. Our terriers, worldwide, are classy, correct in conformation and possess a tremendous working ability. They are virtually free of both hereditary and congenital defects whilst among the Kennel Club breeds these are rife.

Kennel Club recognition will not affect any of us and most importantly it will not affect the Real Jack Russell Terriers that are under our care The Parson Russell came and has almost left. This ridiculous attempt will also fail and pass.
The Kennel Club is about to embark on a journey into a minefield of confusion, misery and failure.

The JRTCGB along with its affiliated JRT Clubs worldwide have a huge register of quality Jack Russell Terrier dating back to the mid 70s. Our registration system is carefully structured to prevent any Kennel Club pollution.
We have a breed standard that is totally work related and practical.
The secretary of the Kennel Club, Caroline Kisco, gave the reason for their move:  “By recognising the Jack Russell as an official breed we can help cement its heritage and protect its future”. Unreal!

Well Caroline, you are 41 years too late. We have been doing just that since 1974!
The Kennel Club has NEVER cemented the heritage nor protected the future of ANY of the breeds under their banner! Quite the opposite. Take for example the poor old English Bulldog - they have protected it to the point where natural reproduction is impossible!
What kind of protecting and cementing is Caroline talking about exactly!?

The true working Jack Russell is quite safe where it always has been, LONG BEFORE THE OLD SPORTING PARSON BOUGHT ONE! Safe, with the working terrier men and women of Great Britain and the rest of the world!

Our worldwide aim is:

To PROTECT, PRESERVE and WORK the Jack Russell Terrier. We have held firm against the Parson Russell and succeeded. The same resilience will hold firm again.

Greg Mousley
Chairman and a founder member of the JRTCGB

The Jack Russell Terrier was first registered as a showdog in Australia, where it has become very inbred. It was exported from there to be recognised and shown in FCI countries. These Ozzie exports, in fact, are the dogs that the KC will be recognising - not the working-bred/pet-bred native dogs that are popular in the UK with those who couldn't give two hoots about Kennel Club registration.

So the newly-registered KC dogs won't be the real deal. Sure, they may descend from the same original stock but they have been primped, pimped and inbred for several generations by those who are only interested in what a dog looks like, not what it it truly is under the bonnet.

Inevitably, it will lead to considerable confusion. The danger is that the imposter will start to water down the real Jack Russell as people won't be savvy enough to avoid the KC-registered dogs.

If you ever wanted proof that the KC is not about the dogs, this is it.  Bottom line? The Jack Russell is not theirs to steal.

The "Hands off Our Jack Russells!" petition to ask the KC to revoke this decision is still active - with currently over 800 signatures.   Please sign if you haven't already!

Posted by Jemima Harrison at 10:21