Kitchener: cooking up the enemy? 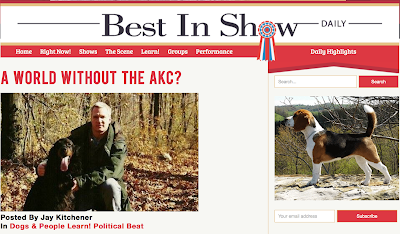 Best in Show Daily last month ran a piece by Jay Kitchener arguing that unless the fancy stepped up to the mark politically, the AKC and the purebred dog were doomed - the victims of a clever and organised campaign by the Humane Society of the United States (HSUS).


"It’s a political agenda for social change that seeks a world without purebred dogs and eventually no dogs at all.  If you think that’s an exaggeration, then you’re not paying attention to the very real and dangerous changes to dog ownership that are sweeping the nation.  If you think this professional political agenda for social change could never happen, you’re mistaken.  Twenty-five years ago not many of us truly believed gay marriage and legal marijuana would ever become a reality."

He goes on to bemoan that the purebred lobby has not seen fit to campaign against "the wave of anti-pet shop legislation sweeping the nation" and in particular he states clearly:

"All dog breeders have a right to breed dogs in the manner they choose to breed them."

Have a read of the whole thing here then come back and tell me what you think.

• The view from here is that the AKC is auguring into the ground because it has failed to embrace reform - in both the way it views dogs and in the way its breeders produce and value them.

• The view from here is that breeders do not have the right to breed dogs in the manner they choose to breed them when it causes them harm.

• The view from here is that while HSUS is clever and sneaky in its efforts to secure local ordinances that impact negatively on some good dog breeders, it is not the bogeyman the purebred fancy thinks it is and it does not want "all dogs gone".

• The view from here is that the best way to tackle the perceived threat is for the AKC and breeders to   embrace better science and breed dogs in such a way that there is no question about their worth or welfare.

• The view from here is that gay marriage is a good thing. Oh, and that the legal recreational use of cannabis does considerably less harm than breeding a Bulldog or a Pug or a crippled German Shepherd.