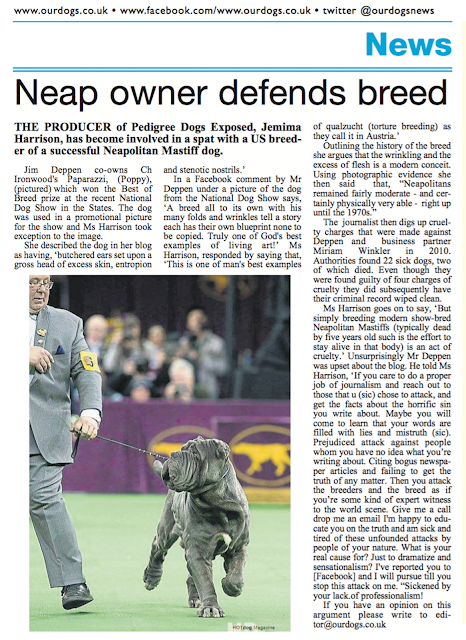 I blogged this story here 10 days ago. the As you can see, Mr Deppen is not terribly pleased with me.

Here, for the record, is my full reply to his email.

Dear Mr Deppen
I believe I have accurately reported the case which is a matter of public record. You were charged with cruelty; you denied the charges but were found guilty on three counts; you later had your criminal record expunged in a first-offender rehab initiative.
You are, however, very welcome to send me a statement which I am happy to add to the piece.
Clearly you like Neapolitan Mastiffs.  “I like things that look like they hit by a car” you said in an interview in 2005.  No doubt, like most breeders of dogs with extreme phenotypes, you believe your dogs don’t suffer for the form breeders have inflicted on them. You also clearly believe that exposed haw is a breed feature, not a fault. I would ask that you pull down your own lower lid and take a few steps outside. That’s what it feels like for the dogs, too.
Poppy’s nostrils are clearly stenotic, too.  These are a risk factor for heat-intolerance/compromised airways and breeders need to take these into account when breeding.  The old Mastini  - who incidentally never looked like they had been hit by a car - had open nostrils and would have coped with heat better as a result.
Here’s a 1960s dog against your Poppy.  Please ask yourself… which dog would you rather be? If you can’t see it, show your friends outside of the show-ring and ask them. 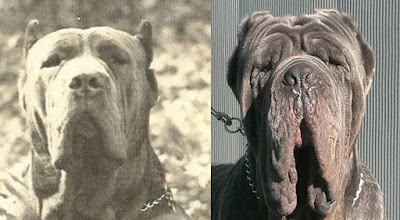 Dogs are very stoical; they put up with a lot and they still love you. My view is that the suffering we impose on Neapolitan Mastiffs is not acceptable. The ectropion. The cherry eye. The pyoderma. The cancer. The very short lifespan. The sheer grinding weight of that body and sagging flesh as they age. You don’t see this because you are immersed in a world where it is acceptable.
And yet you surely know that the modern dogs are not historically correct - because it is impossible to find a single archive picture that looks like any of the dogs today.
I am passionate about purebred dogs and have campaigned on Mastino health for some years now. There have been some improvements in the UK as a result of this; certainly dogs as “hypertype” as Poppy would no longer win in the big rings here.
I would say that I think Poppy moves well compared to the UK dogs though. I watched the Westminster 2013 footage and could see that he moved fluidly and freely and has much better angulation than the UK dogs. If you could combine this with with a more moderate head and skin, you could indeed have a magnificent dog.
I am sure that nothing I say will change your mind. But how I wish you could look at your dog afresh and see him for what he is - a no doubt-gorgeous boy trapped in a body that fails him.
You have - or certainly had - some great looking Pointers. You do know what a functional dog is.
Best
Jemima
Jemima HarrisonPedigree Dogs Exposed - The Blogwww.pedigreedogsexposed.blogspot.com

No reply yet from Mr Deppen.
Posted by Jemima Harrison at 13:44