Faced with widespread concern about the German Shepherd Best of Breed at this year's Crufts, the Kennel Club did the right thing: it went on TV on Sunday night and admitted the dog shouldn't have won.

But don't be fooled by the suggestion in this clip that this win was a one-off aberration by a rogue judge. Nope, this dog has actually won dozens of times under many different judges - all under Kennel Club rules.  And no one has batted an eyelid. 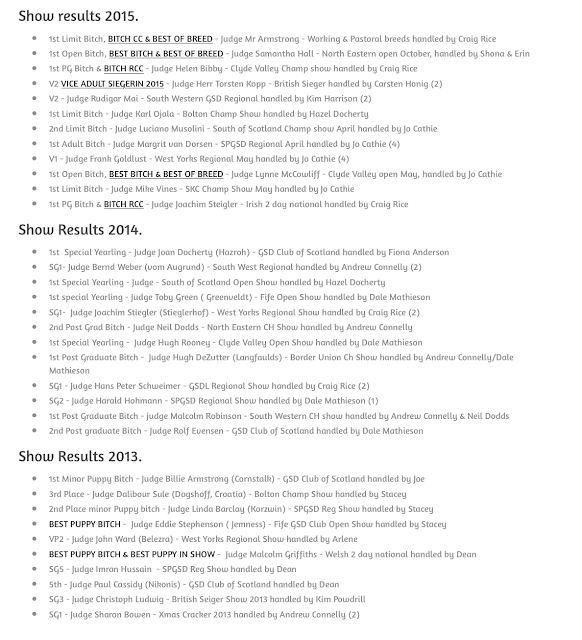 Here are a couple of judges' critiques of the dog - the second one, incidentally, by the daughter of the judge that awarded the dog Best of Breed at Crufts on Saturday.


1st - CRUAGHAIRE CATORIA (MR & MRS S CUTHBERT)This bitch is so correct throughout, lovely feminine head & good expression, neck well set on to body. Very good front angulation, lovely topline & good croup, very balanced hind angles. Correct height to length ratio, super underline. In movement she is outstanding so clean coming & going & her profile movement was really excellent.. Very pleased to award her the CC & BOB. Later I was informed that I gave her 1st award as MPB, which pleased me & thinking back I recalled a very moulded shapely little pup of quality and a real baby but what a bitch she has grown in to now!
Mr W Armstrong ( Corn Stalk ) Working & Pastoral Breeds of Scotland 7th November 2015

The problem here is not this one dog. There are hundreds more just like her being shown in the UK (and in many other countries) because no one has called "Stop!" to the train-wreck that is today's show German Shepherd.

The problem is the mass delusion among show German Shepherd breeders that what they've done to the breed is an improvement.

The main reason for the hand-wringing on TV last night is because the awful truth was suddenly evident to the public, mostly via this blog, and because the Kennel Club's social media was over-run by so many shocked people.

The Kennel Club had no choice last night. It would have been PR suicide to try to defend the dog.

Of course, some people have praised the KC for its willingness to admit there was a problem with the dog,  but it is important to know that the Kennel Club also said it would act after Pedigree Dogs Exposed in 2008 highlighted the problems in German Shepherds - and again in 2010 after there was criticism of another top-winning GSD at Crufts.

Sure,  the problem is complex. There are thousands of German Shepherd breeders out there who will look you in the eye and tell you there's nothing wrong with their dogs.

But we've got to try to tackle this.

Please... can we use this opportunity do something for this breed?

REVEALED: The Crufts GSD footage they didn't want you to see.

GSDs at Crufts: the continuing travesty

Posted by Jemima Harrison at 14:40