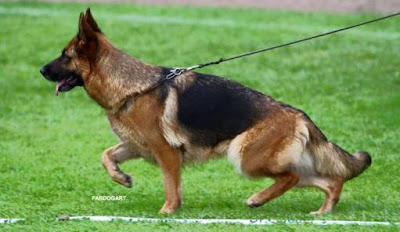 Illustrating just how blind some German Shepherd breeders are to the problems, the owner of the Best of Breed German Shepherd has today released this picture along with a statement defending her dog.

I was blissfully unaware of all the negativity around one of the best show days of my life until earlier today (Monday) and I am both deeply shocked and terribly upset by all the horrendous comments directed towards my beautiful Tori.

Words cannot express the heart wrenching experience that I have suffered. This is so unreal I want to believe it is untrue and to wake up. The comments made on television about my lovely Shepherd were unbelievable especially when one considers the brevity of the images. How can you judge a dog on such a brief observation? There is a clear lack of tolerance and knowledge of our German shepherd breed.

It should not be a surprise to anyone why the GSD breed in the UK are being strongly drawn towards the German SV system – Germany being the founders of our breed just over a hundred years ago and they have established the most comprehensive system of any other breed in the world. The German SV system requires for showing and breeding DNA parentage, microchip identification, to meet strict conformational criteria according to the German breed standard, hip and elbow grades and assessment of the spine along with formal character assessment, endurance test of 20 kilometers gaiting, IPO test of courage, tracking and obedience and a very demanding breed survey (korung) Soundness in mind and body is a crucial part of the German Shepherd breed.

At Crufts 2016, the vet examined my bitch before she was presented with her Best of Breed certificate and deemed her to have no visible condition which adversely affects her health and welfare. This is the second Kennel Club required vet check she has passed in the last 6 months.
As if it was not upsetting enough that my bitch faltered under the heavy media coverage in the Arena on what should have been the happiest day of my show life to then be tried and convicted on social media and the press this has now become the worst nightmare of my show life.

Mrs Cuthbert also included the dog's health record and a long list of show wins, pointing out that the dog had won under a number of top Kennel Club judges.

I confess I have some sympathy for Mrs Cuthbert. Her dog is now being scapegoated by a Kennel Club seeking to distance itself from the public backlash.  And yet, of course, Cruaghaire Catoria is typical of many German Shepherds in the show-ring today.

It also emerged tonight that the Crufts GSD judge, Davy Hall - publicly condemned by the Kennel Club on national TV last night - is Vice Chairman of the GSD Breed Council.

The GSD Breed Council is the body the Kennel Club put in charge of training for German Shepherd judges.

Meanwhile, the GSD League of Great Britain has issued this statement insisting that Cruaghaire Catoria is "a fit, healthy dog" and  "a correct type to the German Shepherd Dog standard.

That statement in full:

The GSD League condemns most strongly the manner in which the Kennel Club and the Crufts presenters have created public hysteria regarding the German Shepherd Bitch who gained Best of Breed at Crufts 2016 under breed specialist judge, Davy Hall.

With complete disregard for all of the many breed specialist judges, including highly regarded judges from the breed’s country of origin, that have awarded this bitch top honours at both Kennel Club and WUSV shows, the Channel 4 coverage acted as judge, jury and hangman without any balance of reporting.Cruaghaire Catoria is a correct type to the German Shepherd Dog standard, she has a KC/BVA hip score of 13 and elbow score of 0 – these scores are well below the maximum for showing at WUSV shows, the Kennel Club have no minimum standard for showing or breeding purposes. She is a fit, healthy, family dog.The judge, Davy Hall, of the Gayville’s GSDs kennels has been an exhibitor and breeder of GSDs for many years having bred, owned, trained and handled many top winning animals and Champions including the current breed CC record holder.

After being awarded Best of Breed, Catoria was then passed by the appointed Crufts vet to certify that she was fit and healthy to enter the big ring. She had passed another vet health check 6 months earlier. Indeed, no GSD has ever failed a vet health test at a Championship Show since they were introduced as part of the KC’s Breed Watch.

German Shepherd Dogs are generally shown outside and certainly very few have ever experienced anything like the Crufts Best In Show ring. This young bitch performed extremely well in her breed ring but shortly afterwards in the main arena became overwhelmed by the environment and did not show her true beauty or proper movement, she was not the only dog to react badly to the pressure of the situation. Her internationally renowned handler Craig Rice, who has handled at the top level for many years, explained what took place in the lead up to the group judging and in the main arena….After a foot perfect performance in the GSD Breed ring, where Tori gained Best of Breed in a high quality entry that included 2 VA rated Dogs, we were taken to do the KC appointed Vet Check. The Vet stated that there was absolutely no possible reason that he could not pass Tori as she showed no signs of bad health and her movement was not impaired in any way. This test included movement of the dog.

After a long wait of over 3 hours, which includes numerous forced photo shoots in the Crufts Best of Breed collection ring, we were finally abruptly told we would be entering the main Arena. This is a situation that no owner, trainer or handler can prepare for. A packed auditorium with hot lights, music, loud speakers and constant cheers and clapping is not an everyday occurrence for any dog. Unfortunately, after a further wait whilst inside the Arena, Tori had become quite agitated. I had tried to calm her by allowing her move around a little but was repeatedly told that I must not let the dog move at all. By the time we were judged Tori was in a high level of distress and was struggling to cope with the situation, which seemed to worsen after the judges rough handling, whilst checking the teeth, of a clearly stressed dog. Tori's uncharacteristic erratic behaviour has clearly given a bad impression of what I consider a GSD of the highest standard in both construction and health test results.

German Shepherd Breeders lead the World in their attention to health testing and breeding selection and whilst they must not be complacent about any exaggerations in conformation or temperament, the breed should not be victimised in this way by the Kennel Club, the media and social media.

German Shepherd exhibitors have a viable alternative to Kennel Club shows and it is of no surprise that more and more are turning their back on traditional UK shows in favour of the WUSV style show where DNA recording, identification and health tests are pre-requisites, not afterthoughts. All dogs are graded and critiqued so that their owners and breeders are given a clear picture of what they need to do to improve in the next generation. This is a great responsibility for the judges who are trained to a high level and have to have considerable experience as breeders before they are approved.

The GSD League will continue to strive to consult with the Kennel Club on matters regarding health of the GSD and hope that our suggestion of piloting compulsory identification of all exhibits, health testing prior to confirmation of Champion title and mandatory minimum health test requirements for all breeding animals will one day become a reality.German Shepherd Dog League

So now you see what all those who want change are up against. Scary isn't it?
Posted by Jemima Harrison at 23:32