Tonight, the Toy Group at Crufts 2016 was won by a Pekingese, Ch Yakee Ooh Ah Cantona.  I confess I yelled "Nooooo!" so loudly that all my dogs ran out of the room.

But at least they could.  Poor Eric had to be carried in the ring tonight by his rather creepy joint-owner Bert Easdon; and when the poor little thing was made to waddle for the judge, out popped a U-shaped tongue (seriously, can any Peke move at all without panting?) and the dog did his best to take a short-cut.

Afterwards, a tired Eric sat watery-eyed on the sofa with Easdon, who explained that his top show-dogs didn't actually live in the house because if they were allowed to mix when in full show-coat, they would chew each other's ears.

Thus denied even this one act of revenge on the humans who have bred them, Eric and his fellow hostages are doomed to spend their show careers crated or kennelled on their own. I bet they don't get out much, either.

The judge was awful too, making a point of dipping her pasty face into every dog's face, even pursing her lips to kiss one or two of them.  She may love her dogs, but she should know better than to do this with strange dogs - even the supposedly fondle-friendly runway models at Cruft's. The Italian Greyhound , the Crestie and the Pug recoiled visibly.

For those that don't know, Eric is the grandson of Yakee A Dangerous Liaison (aka Danny the Peke) who won Crufts in 2003,  After Danny's win, a rumour spread that Danny had had "a facelift". Owner Easdon denied it, saying that the dog had had an exploratory operation for tonsillitis.

In fact, as we revealed in Pedigree Dogs Exposed, Danny had had surgery to treat BOAS (brachycephalic obstructed airway syndrome) before his big win. I've never published this before, but now seems as good a time as any to show you this statement from Glasgow Vet School. 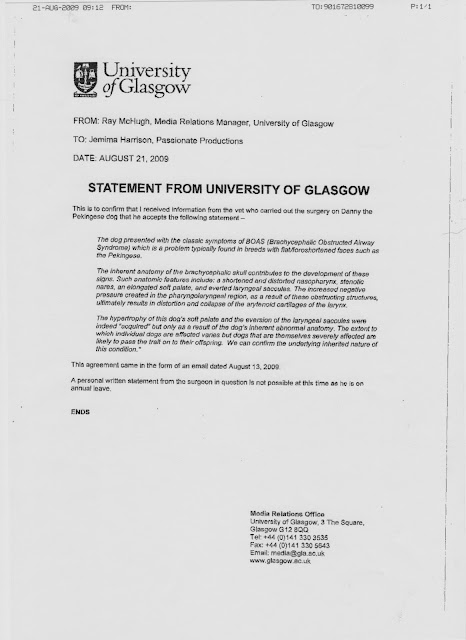 Despite this, the Kennel Club allowed Danny's win to stand.

There are no necessary health tests for Pekingese - and none listed for either dog on the KC's database.