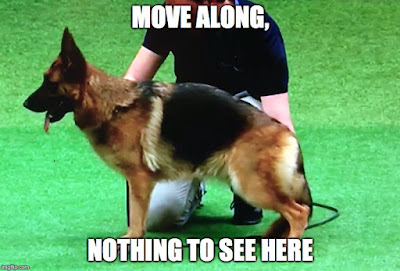 It's been a grim Crufts for the Kennel Club - with the scandal over that German Shepherd  and that Pekingese continuing to reverberate in the UK and abroad.

But, in a letter sent to to  Kennel Club members last week, KC Chairman Simon Luxmoore describes this year's show as a "quite marvellous event". He also refers to the fuss as "one or two breed specific issues" and insists that he "neither overheard nor received a negative comment" as he walked round the show.

Now, of course there are good things about Crufts. (In fact, I'd go so far as to say that it's all good - other than what Luxmoore describes as "our shop floor" - the breed rings.) And I can understand the KC wanting to put a positive spin on things. But did Luxmoore even stop to think how the cursory dismissal of the worst PR the KC has received since Pedigree Dogs Exposed would look when this letter leaked, as it surely would?

The letter in full.

I thought it appropriate to give you a brief update on a number of issues prior to our Annual General Meeting (AGM) on 17th May.

Firstly, I would like to reflect on Crufts 2016 which, barring one or two 'breed specific' issues, which will be addressed by the Board in the coming weeks, I believe was a quite marvellous event with many highlights, and expertly delivered by both Gerald King and Vanessa McAlpine, and their respective teams. With over 160,000 visitors and a peak television viewing audience of almost three million people, more than in any previous year, I felt that the NEC staff, our press and media teams performed with great credit.

We enjoyed a very successful 'royal' visit on Saturday, 12th March and I can report that our President, Prince Michael of Kent, in the company of Princess Michael, thoroughly enjoyed the time they spent with us.

Everyone who participated will have their own highlights but I wanted to share my top three with you. Together with my wife, Pauline, we attended the Junior Handling Association's International dinner prior to the competition the following day. At this dinner, each of the 45 competitors from 45 different countries took the microphone and spoke about themselves, their pride and pleasure in being at Crufts and wished each other the very best of luck in the competition – “eye watering”, I can assure you. Secondly, the sight of 9 year old Lauren Bridges on taking Group 4 in the Pastoral Group with her Samoyed and then marching forward to congratulate those in front of her was memorable. I would suggest these two events themselves give us great hope for the future. Thirdly, the many 'activity' events which adorn the arena, the YKC arena, and elsewhere for what seems like an eternity, cannot go unmentioned. Whilst 'Pudsey's' win in the medium-sized dog agility championship brought me special pleasure, there was a host of other top level competition which was not only mouth-watering in its content but ran like clockwork.

Last but not least, on the many miles I walked around the rings 'our shop floor' over the four days, I neither overheard nor received a negative comment. Everyone appeared very upbeat and we should all seek to build on this.

Beyond Crufts, I am delighted to report that the Kennel Club has 'exchanged and completed' on the Aylesbury property project and 'exchanged' with a view to near term 'completion' on the Emblehope property project. The Chepstow project is progressing and will be presented to the members via the Board at an appropriate time.

The working parties are progressing and the Governance working party, supported by the Board, is set to make a number of proposals to the membership at the AGM. It is proposed that this working party will continue its work in the months to come with a renewed agenda aimed at advancing both the business and 'sporting' sides of Kennel Club activity.

The Communications working party continues to 'move things forward' on the back of consultation and review through 'focus groups' and you will be updated on progress at the AGM. Likewise, the 'Crossbreeds' working party is making slower but steady progress on a range of issues, and again you will be briefed in May.

We had advised you at our November meeting that we would be bringing proposals to the membership in May regarding a possible revision to our membership structure in the context of 'out of town membership'. I can advise you that these proposals will not be brought forward at the May meeting but deferred for discussion later in 2016 since the Board considered that every effort should be focussed by the members on the proposed Governance changes.

I do hope that as many Members as possible will be able to attend the AGM and in the meantime, enjoy the Spring!

Posted by Jemima Harrison at 21:32