And that's what the headline should have been on this week's Dog World's interview with the former chief veterinary advisor of the RSPCA.

Instead, Dog World pulls its punches. But the paper is often rather genteel like that and I for one won't criticise them for it. 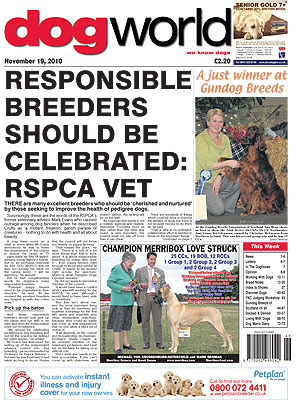 Unlike its amateurish competitor Our Dogs (which today has been forced to remove the frankly actionable comments about Mark Evans from its Facebook site), Dog World employs proper journalists and despite being essentially pro-KC and pro-showing, gives all sides of the dog-breeding debate a fair hearing. This is much to the annoyance of the Kennel Club which used to write an "insider" column for the paper called The Clarges St Trumpeter (reputedly written by KC Chairman Ronnie Irving) but earlier this year de-camped to Our Dogs where there is much less criticism of the Kennel Club.

Mark Evans incensed some dog breeders in PDE by saying: "When I watch Crufts what I see in front of me is a parade of mutants. It’s some freakish, garish beauty pageant that has nothing, frankly, to do with health and welfare." This week he told Dog World: “I haven’t changed my stance one jot.. I felt very strongly when Pedigree Dogs Exposed came out that this was a programme I had been waiting 20 years to be made, because just talking about problems had resulted in no change at all...Somebody has to stick their head above the parapet, and in my case I’m doing it for dogs. My number one concern is the dog, and if I upset a few people I’m really sorry.”

Well, in truth, probably not very sorry.
Posted by Jemima Harrison at 19:17