The UK's first GM Dalmatian - and she's a winner! 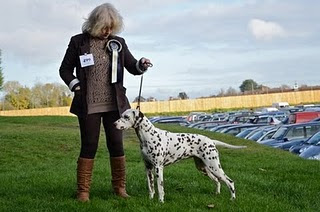 Fiona (or Fiacre First and Foremost as she's more properly known) may look like any other Dalmatian but this spotted girl is a revelation - the first Dalmatian in the UK that is not homozygous for the gene that can cause the painful (and sometimes lethal) build-up of sediment in the urinary system cause by high uric acid levels (ubiquitous in the breed).  Better still,  and at her first outing last Sunday, Fiona won Best of Breed at Coventry Open Show against several "normal" Dals under an all-rounder gundog judge who was probably unaware of what she was and how very controversial this dog's appearance was in a UK showring.

Fiona is a product of the Dalmatian Backcross Project, pioneered by visionary scientist/dalmatian breeder Bob Schaible who, in the 1970s, crossed a Dal with a single Pointer in order to introduce the low-uric acid gene into the breed. Fourteen generations later, thanks to careful selection, the descendants of this one-off outcoss still carry the healthy gene and are indistinguishable from standard Dals except that they are not predisposed to the crippling problems that "purebred" Dals suffer from.

But when I first broached the subject of these dogs with Dal breeders at Crufts 2007, one British Dalmatian Club official told me that she would rather have a suffering purebred dog than one of these "mongrels". Opinion is softening a bit here in the UK (although the British Dalmatian Club fought their recent acceptance by the Kennel Club) although I hear mobile phones ran hot ringside on Sunday when Fiona won.

Meanwhile, breeder Julie Evans (Tyrodal) tells me that she has a long waiting list for Fiona's future pups with the interest mainly coming from pet owners.  Hurrah! If more pet owners demanding healthier dogs, we'd be in a better place.

I hear that the situation in the USA regarding the LUA Dalmatains (as they are known) is also under review. Predictably, the Dalmatian Club of America (which not so long ago even banned discussion of these dogs) is fighting their acceptance but it may be a battle it will soon lose.  I understand the AKC has put the case out to an independent panel comprising vets and scientists. If this is true, it can only be a matter of time. The only objection to these dogs is on the grounds of breed purity, which of course is a nonsense argument. Time to shed these outdated notions.

If you're interested in the history of the backcrossed Dalmatians, check out this great article by guest writer Ron Zimmerman on the Terrierman blog.
Posted by Jemima Harrison at 21:18