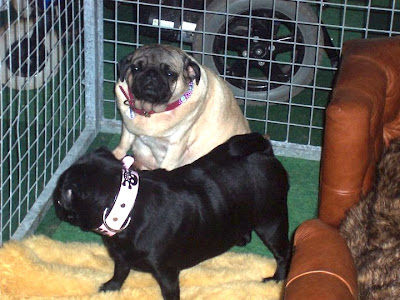 When you're a breed, like the Pug, that is predisposed to overheating and breathing problems, it is a kindness to keep them lean.  This fawn Pug at Discover Dogs last Saturday really was very overweight. It doesn't help either, with the hip dysplasia that is common to the breed (only the bulldog is worse, according to OFA statistics) .

However, according to the Pug reps on the stand, it's not really hip dysplasia - it's that Pugs are built differently to other dogs. This means, apparently,  that there's "no need to hip-score" (And, indeed, only 27 Pugs have ever been scored under the BVA/KC hip scheme which has been running for, what, 40 years or so now?).

Mind you, no less than three reps on the stand were also insistent that Pugs do not suffer from breathing problems.

This picture of rude health is confirmed by the new manual the Kennel Club has produced for vets. It lists exactly.... no health problems for the Pug.

Not quite true according to two recent papers published in the Veterinary Journal (Asher et al; Sumners et al) which found that the Pug suffers from a total of 33 disorders, 18 of them related, or exacerbated, by their conformation.
Posted by Jemima Harrison at 09:45