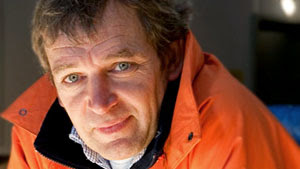 The show-world mostly loathes him, and pedigree dog reformers like me love him... but there's no doubting that you always know where you are with vet Mark Evans, who has just - and rather suddenly -  left the RSPCA after three years. Outspoken Mark will probably forever be remembered for his controversial description of dog shows ("a parade of mutants") in Pedigree Dogs Exposed and he got a lot of flak for it. But the world needs people who will stand up and speak out on issues they feel strongly about, especially when it comes to animal welfare.

Certainly, without Mark, I do not believe the RSPCA would have backed Pedigree Dogs Exposed the way they did. I had contacted them before Mark joined and they had sent me a bland one-paragraph statement on the issue.  After he joined, I tried again and Mark phoned me back almost immediately: "I've been waiting 20 years for someone to make this film," he said and then galvanised the RSPCA into standing up and being counted on this important issue.

When Mark came to see us here in our home/office shortly before Pedigree Dogs Exposed aired, he spent the first 10 minutes on the floor smooching with my Flatcoat, Maisie. Evidence of a true dog-lover, I reckon. (Well, her breath ain't that sweet...)

I've spoken only very briefly with Mark since his departure and he says that he's proud of what he's achieved at the RSPCA (pet obesity was another big campaign for him) but felt it was time to move on. Officially, he's leaving to concentrate on his TV career (he's the accomplished presenter of Channel 4's Inside Nature's Giants for which he's currently filming another series). Unofficially?  He's not saying, but there's no doubt that there were those who were very keen to see the back of him. Mentioning no one's specific name from the Kennel Club, of course.

For a taste of the vitriol about Mark, have a look at the comments about his departure on Our Dogs' Facebook page. What nasty people. Hopefully, Mark is storing it up for a biography at some point. But, either way, I sincerely hope that the celebrations of those in the show world who have this week cheered his departure will be short-lived. After all, a Mark Evans unconfined by the strictures and politics of the RSPCA could be an even greater force to be reckoned with.
Posted by Jemima Harrison at 00:40