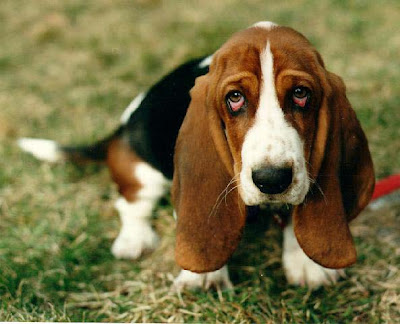 There is not much love lost between Kennel Club vet Steve Dean and me.  It mostly stems from the fact that, after Pedigree Dogs Exposed, he went round telling people that we had withheld medication from Zak, the epileptic boxer in the film, in order to get the poor dog to fit on cue for the cameras.

(For the record, we weren't even there... We provided a camera, but Zak's seizures were filmed by his owners.)

When I heard that Dean, who is Chief Executive of the Veterinary Medicines Directorate, was spreading this nasty little rumour, I sent him a cross email and got a rather sarcastic reply and no apology.  Suffice to say, we're not on each other's Christmas card list.

I have other beefs with Dean, who breeds and shows border terriers.  In one column for Dog World he opined: "Almost without exception breeders who register their dogs seek to breed healthy dogs, however, rarely habitualisation has occasionally driven some norms away from health (less than 10 breeds).”

Less than 10 breeds? Clearly a graduate of the KC School of Statistics.

Anyway, this blog is actually to congratulate Dean for two recent columns for Dog World, both of which tackled the fact that problems sometimes become so entrenched that they become normalised.  Two weeks ago, he wrote about eyes, stating:

"Where a defect is not recognised as a health issue they can become accepted norms for a breed or, even worse, are not recognised for causing a problem...  Examples of defects that have become accepted can readily be seen by observing eyes in a number of breeds. Most dog folk will have heard of entropion and ectropion but how many take any note of them in the show ring and if they do, how many appreciate the misery they offer for the afflicted dog?

"Taking the more readily observable example first, ectropion is seen in breeds where the lower eyelid droops away from the eyeball. To point the finger at no dog currently alive, take a look at the Landseer painting in the KC Gallery, the dog has ectropion and the artist has faithfully reproduced it. So this is not a new issue. Some may say it adds expression to a face, others may say their breed has always been like this, but neither comment justifies its existence.

"Clinically the failure of the lower lid to adequately sweep across the eyeball during blinking will result in chronic inflammation of the eye membranes and therefore a lifetime of discomfort. It is even worse with entropion where the lid turns inwards so that eyelashes and hair rub up and down the eyeball surface with each blink."

This week Dean writes about lameness:

"...in [some] breeds a degree of lameness appears to have been accepted. Judges should exclude lame dogs from the ring yet in these breeds this is not happening and this is not in the interests of a breed’s future... Breeders need to be more critical about the dogs they breed from seeking to breed away from afflicted dogs. Yet in some breeds it is almost ignored because so many of the breed show lameness – this cannot be right."

It never ceases to amaze me that some show-breeders just don't see this. It's perfectly bloody obvious to everyone else.
Posted by Jemima Harrison at 20:45