More from the KC School of Trying To Look Good...

.. while putting in sneaky caveats so that nothing much has to change. 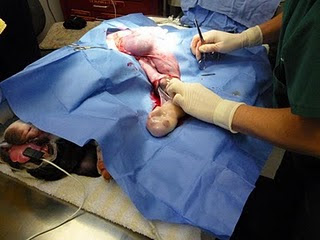 Today, it's the announcement from the Kennel Club that from January 2012, it will no longer register puppies that have been delivered by C-section from a bitch that has already had two C-sections.

This is in response to veterinary (and other) concerns that some breeds have an extremely high C-section rate because they have been bred to such a distorted shape that birthing naturally is no longer an option. The rates for C-sections are  eye-watering as revealed in a paper earlier this year, using data drawn from the 2004 KC/BSAVA health survey. The highest C-section rates were for the Boston Terrier, Bulldog, French Bulldog, Mastiff, Scottish Terrier, Miniature Bull Terrier, German Wirehaired Pointer, Clumber Spaniel, Pekingese and Dandie Dinmont. In the Boston Terrier, Bulldog and Frenchie, the rate was more than 80 per cent.

The idea behind the C-section limit is to encourage breeders to produce dogs that can actually meet this most basic test of survivability - the ability to reproduce.  For this to happen we would, for instance, need Bulldogs bred with smaller heads and wider pelvises.

However, the KC has added a caveat to the new no-more-than-two C-section limit. And it's this: "...except for scientifically proven welfare reasons and in such cases normally provided that the application is made prior to mating."

I have just emailed the KC's Caroline Kisko with the following question: "If a bulldog breeder's vet contacts you prior to a delivery and points out that for welfare reason he must do that third or fourth C-section, will the KC will register the puppies?"

Now Caroline is not answering my emails at the moment, so am not terribly hopeful of a response.  But unless I am missing something, I can only assume that the KC is fudging the issue again. Because it seems to me that the breeders only have to get one of their bulldog-friendly vets to write to the KC to tell them that the bitch in question will die if forced into a natural delivery and the KC will register the pups.

Now this IS a fiendishly difficult issue because, if the ban was categorical, some breeders may put their bitch through a natural delivery that may kill her and the pups. But as it stands, this is a classic piece of KC spin. Nothing will change.

So what's the answer? Give the breeders a reasonable deadline - such as that from 2020 (which gives the breeders 10 years to change the conformation and to select bitches that can whelp naturally), bitches that need a second C-section must be spayed at the same time. No exemptions. None.

UPDATE
Have now heard back from the KC. In answer to my question: ""If a bulldog breeder's vet contacts you prior to a delivery and points out that for welfare reason he must do that third or fourth C-section, will the KC will register the puppies?" the KC's Caroline Kisko has replied: "No Jemima – we won’t – and I think the release makes it clear."

You be the judge. Here's what the release says:

"The Kennel Club has confirmed that it will no longer register any puppies born by caesarean section from any bitch which has previously had two such operations, except for scientifically proven welfare reasons and in such cases normally provided that the application is made prior to mating."

I've gone back and asked for an example of what a scientifically-proven welfare reason might be - because as it stands surely a vet saying that the dog would not be able to whelp naturally would qualify?
Posted by Jemima Harrison at 13:52