Another spot of bother at Discover Dogs 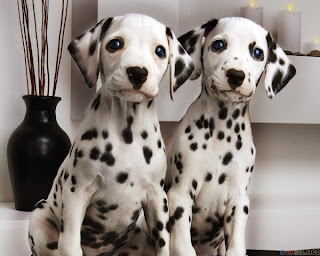 "Five per cent of dalmatians are deaf" a poster on the Dalmatian stand admitted. Good that they're mentioning deafness but pity they didn't get the figure right. Although only five per cent are deaf in both ears, another 15-20 per cent of them are deaf in one ear. In other words, around one in five Dalmatians are born with some degree of deafness. The bilaterally deaf dogs are often euthanased - a nasty business because you can't test them until they are six weeks old. Unilaterally-deaf dogs manage OK but of course God gave Dog two ears on the basis that two are better than one. The problem is that deafness in the breed is perpetuated in part because Dalmatian breeders are obsessed with perfect spotting and select against dogs born with patches. The genetics have yet to be unravelled, but there's little doubt that deafness is linked to the lack of pigment.

Having said that, the KC has recently amended the Dal standard to permit some patching on the head - well done the KC. They weren't terribly pleased about this on the Dalmatian stand: "The Kennel Club is a law unto itself," complained one of the breed reps who also totally denied the urate stone problem in the breed. "Deafness is the only condition they suffer with," she said very firmly indeed when asked about it. And, goodness, what a grimace when asked about the Dalmatian outcross I blogged about a couple of days ago.... You can take it the natives aren't very happy about the mongrel in their midst.
Posted by Jemima Harrison at 18:39