And the AKC's decision re accepting the spotted mongrels is...

..to defer to the very people who are fighting it.

Last week, the American Kennel Club met to discuss whether or not the AKC should register the backcrossed Dalmatians - dogs which don't suffer from the uric acid defect that effects the rest of the breed. This is a condition that, in the males,  can cause urate crystals to block the urethra - meaning the dog can't pee. Left untreated, the dogs die within 3-6 days. 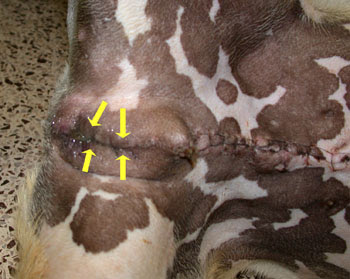 Yep, there are people out there who would rather their dogs went through this than allow just 0.3% of mongrel blood into the breed.

The AKC commissioned a bunch of scientists to explore the issue for them. The scientists' findings? Absolutely unequivocal:

"Because the introduction of the low uric acid dogs into the AKC registry gives Dalmatian breeders a scientifically sound method of voluntarily reducing the incidence of the condition, this committee strongly recommends some controlled program of acceptance of these dogs. Where the strict health and welfare of the breed is the over-riding concern, no other argument can be made."

And yet what does the AKC decide?

"The Board agreed to a proposed agreement, pending acceptance of the Dalmatian Club of America (DCA) Board, which would bring the matter to a vote by the DCA membership in June 2011. The AKC Board would consider this vote, along with other factors in reaching its final decision."

Given that the most vehement opposition to the dogs has come from the breed purists within the DCA, the chances of the dogs being accepted in June are pretty slim.  Hell, it wasn't very long ago that the Club even banned discussion of the dogs.

It's in AKC show rules that male dogs should have two fully descended testicles. Clearly the same does not appy to the AKC board.

(At least on this issue the Kennel Club here did stand up to breed club opposition and should be congratulated for it.)

In the meantime, I can enjoy reproducing the scientific report here in full. And to the continuing deniers of the suffering this defect can cause,  I would like to say: put this in your pipe and smoke it.


The question of registration of the LUA Dalmatians has been a contentious subject of debate. The committee has attempted to remove itself from any emotionally and politically charged issues, and instead focused purely on the following basic questions:

Are the dogs in question purebred Dalmatians?
In the research phase identifying the single gene responsible for the uric acid defect, retrospective analysis of the LUA dog’s pedigree and parentage data, along with correlation to spot urine testing records, revealed that zero mistakes had been made in the record keeping. The DNA test results confirmed a 100% accuracy of the pedigree and urine testing records. With over twelve reported subsequent generations from the single cross breeding in the early 70’s, today’s descendants should be more than 99.97% pure Dalmatian. Surely this level of purity should pass a litmus test of being purebred.

What is known about Dalmatians and high uric acid?
The Dalmatian breed is known to be fixed for a medical condition which causes a metabolic abnormality in which uric acid is not efficiently converted to allontoin. As a result, abnormally high levels of uric acid are secreted in the urine of all purebred AKC Dalmatians (hyperuricosuria), which in turn often leads to crystallization of uric acid salts and/or stone formation (uroliths). This metabolic defect was shown to be inherited as a simple autosomal recessive trait by early investigators, and in the early 1970’s a single Pointer/Dalmatian cross breeding was done by Robert Schaible, PhD in an attempt to introduce a normal copy of the gene. Subsequent research has shown that the inability to properly convert and reabsorb uric acid is the result of a mutation in the SLC2A9 gene, a gene since widely documented to be influential in uric acid transport. All AKC Dalmatians are homozygous for the SLC2A9 mutation.

Are urate uroliths a significant health issue in Dalmatians?
Studies at the urolith laboratories at the University of Minnesota, UC Davis, and the University of Guelph have all shown that Dalmatians have a significantly higher odds ratio of urate stones than any other breed, and male Dalmatians have an exponentially higher incidence than female
Dalmatians. While the exact frequency of urate stones in Dalmatians is unknown, based on the published data, the frequency of stone formation in male Dalmatians has been reported in peer reviewed scientific journals between 13.8% and 34.3%. In a twenty year survey of the Minnesota Urolith Laboratory, 9,095 Dalmatians were diagnosed with urate stones. This represents almost 500 Dalmatians a year from this center alone.

Are high levels of uric acid a predisposing factor to urate uroliths?
It is true that while all purebred AKC Dalmatians exhibit high levels of uric acid; not all of them form stones, not all stone formers block, and not all dogs with blockages require surgical intervention. Continued research is warranted to determine what additional genes or environmental factors may influence the actual formation of stones. However, given the genetically fixed condition of hyperuricosuria in Dalmatians, and the data regarding urate stone frequency compared to other breeds, there is no question that high levels of uric acid are a significant predisposing factor.

Could selective introduction of the LUA Dalmatians into the AKC Dalmatian gene pool have a positive impact on the health and welfare of the breed?
Urinary obstruction due to uric acid stone formation is also a significant problem in Black Russian Terriers and Bulldogs. Affected dogs in both breeds have been shown to have the exact same SLC2A9 mutation as found in the Dalmatian, though at a much lower frequency. However, since the mutation is not fixed in these breeds, breeders can use the available genetic test to selectively breed away from the mutation – thus preventing the production of dogs liable for uric acid stone formation. This will allow a reduction in the frequency of the disease over time.

Unfortunately, since AKC Dalmatians are 100% homozygous for the mutation, the only way to correct the genetic defect is through the introduction of the normal SLC2A9 gene. The addition of the LUA back cross descendants (those heterozygous or homozygous for the normal SLC2A9 gene) would enable breeders to voluntarily introduce the normal gene into the gene pool, and would yield immediate benefits in reducing uric acid levels and the liability to form urate stones.

A PDF of the AKC minutes and the full scientific report can be downloaded here.

If you feel strongly about this, please, please write, call or email the American Kennel Club and tell them that it's time they put the dogs first. If there's enough pressure, they will have to make the right decision.
Posted by Jemima Harrison at 23:37