And while on the subject of Scottish terriers 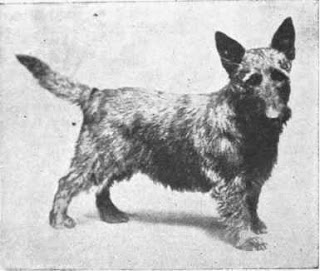 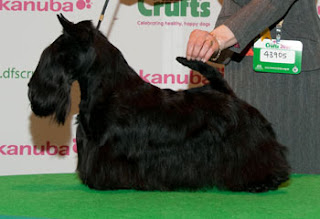 Trawling for pix for the last post on Skye Terriers, I found this pic (top right) of an old-time champion Scottish Terrier, Champion Laindon Locket (anyone know what year?). Now compare this dog with the Scottie today  - unrecognisable as the same breed.

Of course I can't whine about breeds being preserved in aspic in one post and then complain about them evolving in the next.  There's nothing intrinsically bad about change. But you can see the point of the Skye Terrier of old - a dog that looks hardy and functional and would barely need a brush from one year to the next.

I am sure they didn't suffer from the jaw-dropping rates of bladder cancer that afflicts the modern Scottie either.

There's a great human champion of Scotties in Joseph Harvill who publishes Great Scots magazine in the US. Not so long ago, Harvill wrote: "At the risk of laboring the obvious let me survey again our Scotties’ genetic health picture. The stark reality of our dogs’ predicament must be driven home to each of us, for until it informs us and frightens us and angers us it won’t motivate us to change the way we breed and buy Scottish Terriers.

"And that may be the good news. Padgett’s book and his Scottish Terrier breed research (Control of Canine Genetic Diseases, 1998) mentions nothing about predisposition to cancers now killing our dogs: lymphosarcoma, bladder cancer, malignant melanoma, mast cell sarcoma, hemangiosarcoma, and squamous cell carcinoma of the skin.

"One fact alone is the stunning ‘poster exhibit’ of our breed’s genetic predicament: the Scottish Terrier is 18 times more likely to develop bladder cancer than other breeds. Across all purebred dogs the risk for bladder cancer is 0.74, according to Purdue University researchers. Scotties carry a risk factor of 18.09! There is no plausible explanation for this shocking fact short of genetic predisposition.
After all, our dogs’ world is the same polluted environment other modern breeds inhabit, yet Scotties are 18 times more vulnerable; our dogs are on the whole as well or better cared for as any breed, yet they are at massively disproportionate risk to die of bladder cancer."

Of course Harvill is seen as a heretic by many Scottie breeders - reviled for speaking out about the breed he loves.  But then so are so many critics.

I recently re-found this quote from an American breeder of Kangals who wrote this on a canine genetics forum. "The KC, AKC and CKC are like the Church. They fight reform and progress every step of the way, hanging witches (like Jemima) and engaging in dirty tricks, negating science and extolling blind faith as a virtue. Then when they make a grudging step forward, long after the rest of the world has done so, they claim that progress as their own."

Of course, I don't mind who claims the progress. Just as long as it happens.
Posted by Jemima Harrison at 12:49