More on the bullies

A comment on the last blog pointed out that the sheep head on the modern bull terrier (or "Roman finish" as the breeders prefer to call it in an effort to imbue it with rather more grandeur) is an aesthetic preference that doesn't cause health problems. 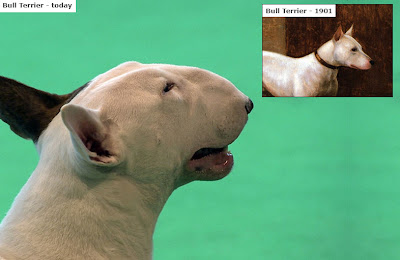 The above is a still from footage we shot for Pedigree Dogs Exposed and it shows how extreme some of these dogs' heads are.

I love Bullies - they're full of character. But, however hard I try, I am at a loss to understand why anyone would want to do this to a dog.  It's the most unnatural shape (the whole head in fact, not just the bridge) and although I can't prove a health-deficit, surely those small eyes and head shape must have some impact on the dog's ability to see?  I know of one Bull Terrier owner who played what they thought was a great game with their dog.  It involved putting a grape on the floor in front of their dog and, oh, how they laughed that the dog could not see what was directly in front of its nose.

Does it matter? It does to me because no natural dog has a head this shape; it's been done on a whim and it adds absolutely nothing to the dogs' function.  And it isn't just the dog's head. Just compare the proportions of the historical dog with a current modern UK show dog: 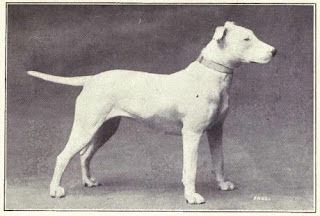 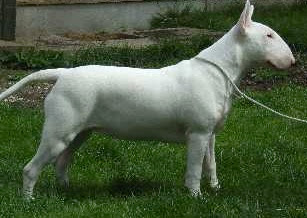 Which is the better balanced, better proportioned dog? I don't think that anyone other than those in Bull Terriers would think it was the second dog. But what do you think? Has Kennel Club breeding actually "improved" the Bull Terrier?  And I don't mean temperament-wise. I accept this has improved. But temperament has nothing to do with phenotype - except perhaps in the Bulldog where the current phenotype makes it almost impossible for the dog to put up much of a fight even if the mind was willing.

I suspect I might be deluged by Bully owners trying to skew this poll, but let's give it a try anyway...

Posted by Jemima Harrison at 16:55