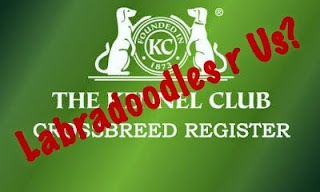 On April 1st this year, I ran a cheeky April Fool  claiming that the KC was to launch a register for crossbreed dogs.

It prompted the usual outcry from the purists who don't want the KC to have anything to do with zee feelthy mungrels.

As it happens,  I knew at the time that such plans were in the pipeline. Not because I have much inside info. Not because I'm prescient. Because it's a no-brainer.

As I wrote back in April:

But then in June, the-then Chairman Steve Dean, who had been leading the march into inclusivity was ousted and Simon Luxmoore replaced as Chairman on a "core values" ticket.

Dean felt strongly that if the KC is to be taken seriously in the modern age it needed to be about all dogs, not just purebred dogs (as in fact is stated in the KC's constitution).


“This has been our stated mission for many years now, and yet some members clearly believe we should narrow the focus of our efforts to purely the registered purebred dog," he wrote in the June issue of the Kennel Club Journal.

This, said Dean, was an "isolationist approach" which would not allow the KC to speak authoritatively on canine issues "unless members are content to limit our remit to speaking only about health and inherited diseases in the pedigree breeds.

“The world of pedigree dogs has a vast array of experience and knowledge that can be used across the spectrum of dog ownership. The practical skills we bring to the table on breeding, genetics, training, socialisation and husbandry are extensive and form an important part of the public debate on dog ownership.

The KC, he felt "should stand up for all dogs whatever their origins."

The stance enraged the diehards who simply don't want the KC to have anything to do with mutts. They even want breeders who produce purebred dogs in non-standard colours to be chucked off the Assured Breeder Scheme.  Dean got the boot. 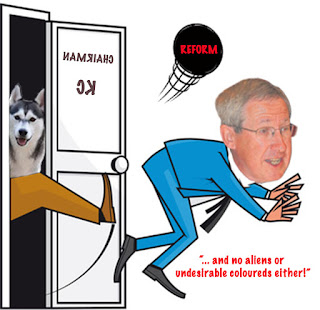 Many rejoiced - including dinosaur judge Jean Lanning who at the KC's spring AGM had proposed (and won) a motion to review the KC's acceptance/promotion of crossbreeds. (Essentially, she wanted them out; unhappy even about them being registered on the KC's activity register.) Lanning also criticised the acceptance of imported dogs which may contain "alien" blood, and suggested that recent concern about purebred dog health was a veterinary plot.

As reported in DogWorld:

[Lanning] feels that there are many thousands of dogs who on the whole lead pretty healthy lives if they come from good breeders, but she “finds it sad that a very small elite section of the veterinary profession appear to many of us to be far away in remote ivory towers, often advocating that some of our most cherished pure breeds should be crossed out to a different breed.”

She instanced horses from the Spanish School of Riding and the Chillingham cattle which have been bred for centuries without fresh blood, and mentioned the plight of the wild cat, whose demise is threatened by interbreeding with the feral cat.

I think many thought Dean's departure might spell the death-knell for inclusivity. Certainly, some saw Simon Luxmoore's comments regarding the future as an indication that any plans to register crossbreeds would be put on the back-burner.

Sense has prevailed and, as DogWorld reveals this week, the issue was discussed at the KC's recent SGM, with the KC view clearly being that the KC must reform.

“If it is to represent all dogs and have credibility with Government and the wider public, the KC must consider the cultural shift and large increase in crossbred dogs over the last few years,” said General Committee member Gerald King. “The issue cannot simply be ignored, especially from a health standpoint.

“The KC’s outlook should be to ensure it is involved in all aspects of dogs while continuing to strongly promote pedigree dogs.”

This is genuinely good news - and exactly where I would like a modern Kennel Club to be.  I know there are moves afoot for Scandinavian KCs to embrace crossbreed dogs in this way, too.

The KC's Twitter feed already reflects where it's going. 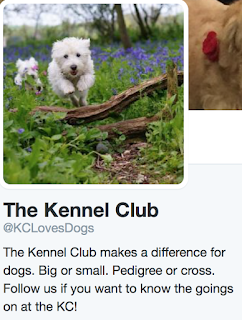 There will be some who see the KC  taking the crossbreed shilling as a commercial move. And while it is of course that, it is not just that.  The KC knows the writing on the wall otherwise - that it will be seen as increasingly irrelevant  if it doesn't embrace the wider dog population.

Dog World asked judge Jean Lanning for a comment in response to the news. She professed to being "quite sad" that she had not been invited to any of the working party's meetings or updated on its progress.

“Registration of purebred dogs is dying and entries are falling – all quite likely because of designer dogs,” she said. “It’s time to re-educate the public, tell them that there’s nothing better than a well-bred dog with no health problems. "

No argument with that.
Posted by Jemima Harrison at 11:01