BRACHY WEEK (extended): "She ran into a door" 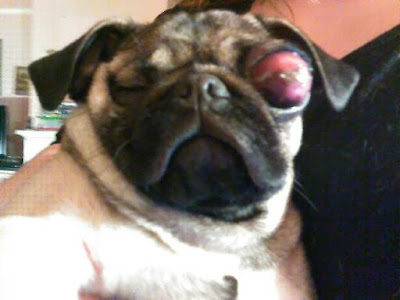 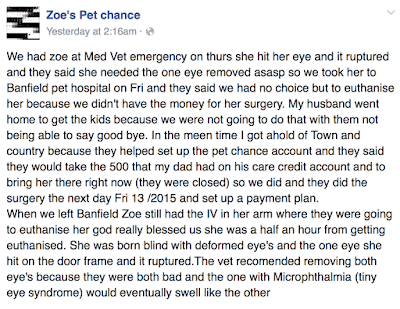 Poor Zoe.  Bashing your eye is always an occupational hazard when you're a Pug - even when you haven't been born blind. And, boy, how painful must that have been?

Given that Zoe was born blind (micropthalmia in one eye; not sure about the other) removing both eyes isn't going to effect her quality of life one way or the other.  Micropthalmia is not, as far as I'm aware, a common issue in Pugs (as it is in some other breeds, e.g. Great Danes). Indeed, in Pugs and other brachycephalic breeds, the problem is almost invariably the opposite - eyes that are too big for their sockets.

Actually, they have normal-sized eyes - it's very shallow eye sockets caused by the brachycephaly that is the problem. With no muzzle to protect them, they are very vulnerable to injury and can prolapse easily. 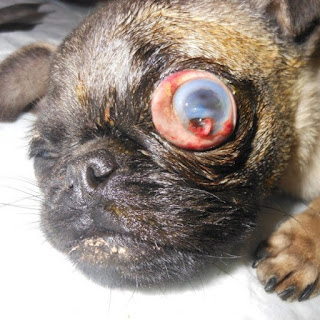 Quite often they have to be removed - called enucleation. 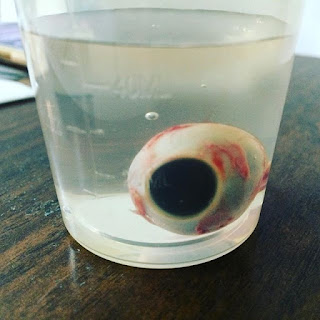 It would not be fair to beat up Banfields for refusing to the op without the money up-front. Vets are not here to subsidise poor breeding. (And that IV line would have been in, I think, to give poor Zoe some pain relief while they were waiting for the family to return.)

As for Town and Country Vets who took on the case on the basis that the family would find the funds eventually... they charged this family $4854 for the removal of two eyes. Yes, it was an emergency, but that's a heck of a lot of money given that eye-removal is usually about £400/$700 per eye.

None of this, of course, is Zoe's fault.

Zoe's fund-raiser can be found here.

On the other hand.. meh.. surgery is done. And that bill is extortionate.