BRACHY WEEK: the price of Pugs 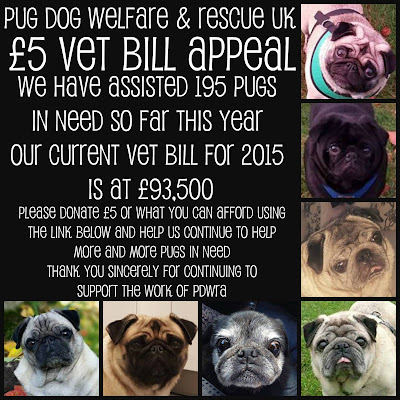 Now, I run a rescue. I rehome black retriever crosses and other gundog types. Our "vet-prep" cost over the past 7 years (excluding the extra costs we incur because of bringing in some dogs from overseas) works out at about £100 per dog (about 500 dogs in total). It is almost always simply the routine costs of vaccination, neutering, chipping, worming and flea-treating. If £100 per dog sounds quite cheap, that's because many surrendered dogs are already neutered/vaccinated.

As it is for all rescues, there is the occasional money-pit - a dog that needs expensive surgery; an elderly dog that is rehomed with the commitment to pay for ongoing meds.  But these are the exceptions, not the rule - and that's not because we avoid them. (Every rescue knows that hero-cases are good fund-raisers.)

A clue as to why it costs Pug Dog Welfare & Rescue UK almost five times what it costs me per dog features in the Telegraph today.


The Telegraph reports that Pug hand-ins to Battersea Dogs' Home have soared  - and that many need surgery. Battersea vets have had to do 20 airway surgeries on Pugs so far this year. (Read the whole thing here.)

A short clip of Peanut the Pug's breathing pre-surgery can be viewed here.

It isn't just airway surgery, though - it is very common for Pugs to come into rescue requiring dental work and/or with ulcerated eyes that need treatment (and quite often removal).

It adds up to a whole heap of suffering - not just for the dogs, but often for owners too who end up giving up a Pug because they can't afford the surgery.

As for Pug Dog Welfare + Rescue -  they do a do a good job in very difficult circumstances.

If you would like to contribute towards their eye-watering vet bill, you can do so here.
Posted by Jemima Harrison at 20:49