"Typhoid Mary" and the "anti-purebred anti-Christ" 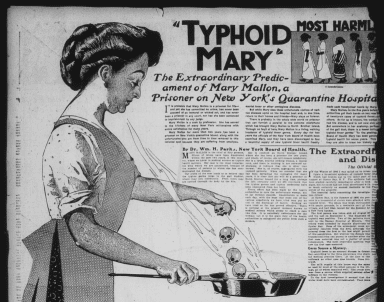 That's me, apparently, as described on the Exhibitors' Voice + Choice Facebook site which meets tonight in Birmingham to discuss "where to go from here".

I see it's also noted that I would be on the new group if I was a good journalist.

It's a new group with no coherence of thought yet, and I can only guess which way it will go, but in the mix is:


I've been putting some thought into the last point (which is clearly the most sensible), and here - for what it's worth - is what I think.
About a year ago in response to criticism (quite often justified, I'll admit) that I pick fault but never come up with practical suggestions,  I wrote Ten Steps to Help Save the Pedigree Dog.  This was my suggestion re dog shows:


7) RE-INVENT THE DOG SHOW
Ways must be found to reward health in the show-ring, rather than just the appearance of it.  I would like to see a change to a points system where dogs arrive in the show-ring with a certain number of points already earned for meeting specific health criteria – such as long-lived parents/grand-parents, working qualifcations,  taken/passed health tests and so on.  This is easy enough to do in the electronic age in which we live.

There needs to be new functional tests introduced for non-working breeds, too – eg evidence that a bulldog is capable of covering a certain distance at a certain pace. None of the tests need to be mandatory and it doesn’t have to be that a dog that arrives in the ring with no points couldn’t win.  But show breeders will often go to considerable lengths to give their dog the best possible chance of winning and if being provably healthier is a way, it should become a strong incentive.

I also made this suggestion:

2) INTRODUCE BREED CONSERVATION PLANS
The KC has introduced breed health plans since Pedigree Dogs Exposed, but they’re nothing like enough. What we need are comprehensive Breed Conservation Plans (BCPs) for every breed. They need to include baseline measurements of genetic diversity for every breed,  tailored guidance regarding popular sires and a coherent plan of action drawn up with the help of geneticists, epidemiologists and breeders.

The BCPs also need to set targets and incorporate ways of measuring progress.
A matter of some urgency is the genetic management of newly-registered breeds. This is currently often done in a very ad hoc way by breeders without sufficient knowledge – with a lot of inbreeding and the rapid spread of new diseases an inevitable result.  There is then often a mad rush to try and get a DNA test.  But the real answer lies in breeding the right way in the first place.

Above, I'm referring mainly to genetic diversity rather than exaggerations. But there is no reason why targets/pledges cannot be put put in place regarding eyelid conformation, skin folds, leg-length in relation to body length, muzzle length, and so on.

It is unrealistic to expect instant change and this needs to be acknowledged. At the same time, the fact that change cannot happen overnight is no excuse to just let things go on as they are in some breeds.

So the solution, surely, is to set proper targets - agreed in advance with the KC, breed club and vets - that by a certain date, certain health critera need to have been tackled and rectified? This should ensure progress without knocking the stuffing out of breeders who are doing the best.

Until such time, I think it is reasonable that some leeway is given -  that if in addition to a general bill of health say five breed-specific criteria were part of a vet-check that the dog must have met, for instance, four out of the five. I also think the vet's findings should be released. The secrecy surrounding the ones done at Crufts 2012 has not been helpful.

Constructive comments/discussion/suggestions really welcome on this one.
Posted by Jemima Harrison at 15:03