Well done to the Kennel Club - I think 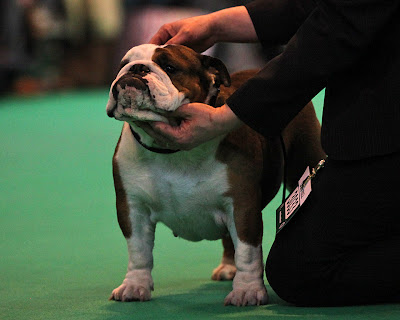 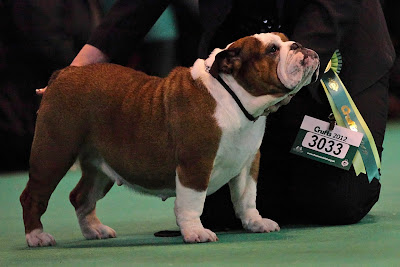 I don't write that headline very often. But all praise to the KC for having the cojones to appoint independent vets to check the Best of Breed winner of 15 highlighted breeds at Crufts, which started yesterday.

I was deeply sceptical about the superficial nature of these but yesterday both the Best of Breed Bulldog and Peke had their awards rescinded and did not go through to the Group. For some bonkers reason, the KC is not revealing why - although an anon comment just received to the blog maintains that the Bulldog was removed from further competition because "the vet pulled her eye about with a torch, found a tiny mark on the eye which he described as an old injury, not health issue, nothing wrong with the eye... you decide health or politics !!"

There is also already a Facebook site - Team Jenny Forever - claiming the dog was wrongfully stripped of her title. It is being claimed there that the dog has a current eye certificate and that it was politics that won the day.

This will sound plausible to the conspiracy theorists - and indeed my other half Jon raised a rather sceptical eyebrow when he heard the news, wondering if it was possible that the KC had made sacrifical lambs of the Bulldog and Peke to show the world how seriously they are taking health. (After all, many claim there was an orchestrated exchange regarding GSDs between the KC's Caroline Kisko and presenter Clare Balding in the 2010 TV coverage of Crufts).  But I'm minded to give the KC credit on this one (although, as ever, always open to new info...)  No vet I know would pull a dog for an old eye injury.

The Bulldog is Ch Mellowmood One in A Million and she's a big previous winner. The pictures of her here were taken yesterday and they show a Bulldog that, by Bulldog standards, isn't particularly exaggerated. (There were certainly far worse dogs in the ring today). I do think she looks a little anxious and/or uncomfortable  - over and above what's normal for a Bulldog that is - and that might be the sign of,  perhaps, an aggravating eye problem. But of course it's hard to tell from still pictures.

I have no inside info on the Pekingese, Palacegarden Bianca. But I was mildly amused to see that the judge was Bert Easdon. Who he? He is the owner of Danny the Peke, the 2003 Crufts winner that featured in Pedigree Dogs Exposed in 2008, essentially on account of having been photographed on an icepack in order to keep cool (another flat-faced breed in which we've selectively bred away the part of the nose that regulates temperature). We also revealed that Danny had undergone a soft palate resection before being crowned Supreme Champion at Crufts in 2003 - something Mr Easdon still denies, insisting that the dog had some minor op because of a recurrent throat infection. (We have no need to argue this - I have a copy of the veterinary diagnosis from Glasgow Vet School).

Again, we don't know why Palacegarden Bianca was excluded, so we will have to hold our horses until we find out.

In meantime, the news is not going down very well on t'other side of the Pond with this dog show blogger... Crufts' Campaign Against the Purebred Dog. Thank you to Peke breeder Susan Shepherd for giving me the biggest laugh of the day (see the comments on the above link): "This is by far the most disgusting thing I have ever seen in purebred dogs," she wrote. What, you mean breeding Pekes so they gasp for breath like guppies out of water? No, of course not.  The most disgusting thing she has ever seen in purebred dogs is disqualifying a dog for health reasons.

Boy is this one going to run and run.

I got the news about the Bulldog and Peke on my iPhone at 5.35pm while walking nine dogs on Salisbury Plain.

The internet connection there is atrociously slow, so I knew I'd have to wait until I got home to blog.  And then one of the dogs - Luka - decided to go AWOL. Luka is 12 or so years old now - a rescue retriever/collie x who came from Dundalk in Ireland about six years ago - and he has always been an Irish wild rover. He's much slower now, on Previcox for arthritis (a miracle drug...), and he's increasingly deaf, but he still does his own thing on walks - pretty much seeing us as a chauffeur service to and from the outdoor venue of his choice. He knows the Plain like the back of his paw and so it's never a worry. I just headed back to the car; loaded up the others and waited while catching up with email and a few phone calls. One hour passed and then, before I knew it, another. The sun set and the moon rose.  Eventually Jon came down with a torch and set off across the Plain looking for the old fella (Luka is his dog). And silly me left the lights on on my car without starting the engine. When Jon re-appeared with Luka ("oh, is that the time?")  half an hour later, the battery was completely flat.

Long story short, we got home at 11pm. Dogs and us now fed and Jon's in bed asleep, it's 3am and I haven't taken my coat off yet.

This is Luka. The other dogs all hang on my every word, but not Luka. He worships the ground Jon walks on. Always has. Always will. 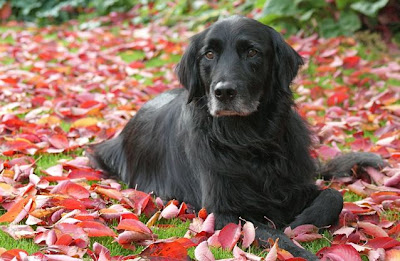 Posted by Jemima Harrison at 02:56