The Bulldog Breed Council yesterday issued a statement (a real one...) regarding the disqualification of Ch Mellowmood One in a Million at Crufts following a vet check last Thursday.

It  says that "Jenny" had an old and minor eye injury - incurred when she was a puppy. It has caused the dog no lasting irritation or damage.

It is obviously important to tread a little carefully here as I do not have the benefit of the vet report which has not been released. But if this is the case, and if there was no other reason for the dog's DQ, then her disqualification would seem unfair.

Overall, Jenny is a less exaggerated Bulldog; she was not panting in the ring and having seen some footage of her at Crufts uploaded to YouTube, she did, indeed, move freely enough. So did the dog CC, incidentally - Birmingham Prince at Midlandbulls - although this dog's right nostril looks stenotic which will not help his breathing and, as others have noted before, Bulldog teeth do not seem a big priority in the ring (perhaps because of the difficulty of achieving good teeth in a brachycephalic head).

Of course, as was made ultra clear by the Kennel Club, it was not the independent vet's job to rule on exaggeration - or even stenotic nares - so the fact that Jenny is better than some is not the issue here. The vet's job was to pick up lameness, obvious respiratory problems; skin issues and debilitating eye problems.  Does an old, healed eye injury fit this bill? No, it doesn't. But what's needed now is not litigation (after all, everyone entered knowing the vet decision was final and referees in every sport from cricket to tennis to football get it wrong from time to time - you just have to take it on the chin).

What's needed is a sensible discussion about how to make independent scrutiny work.  The decision to make the checks independent was last-minute - prompted in part I believe by the widespread scepticism that if they weren't it would be a whitewash. After all, the Chief Vet at Crufts is a former breeder/exhibitor of pugs who is on the record saying he doesn't believe that hemivertebrae in the breed has anything to do with a breed standard that says that a double curl in the tail is desirable or that having a ridiculously flat face causes breathing problems.

Below are a couple of other pix from the Bulldogs at Crufts, showing that this breed has a long way to go, overall, particularly regarding the very short muzzle. But there has been some progress made regarding leg-length/athleticism, and there's no doubt that gasping waddlers are much less likely to be rewarded in the ring today. And, yes, the Bulldog Breed Council was working on this before Pedigree Dogs Exposed.

It was unfortunate for them, really, that PDE - Three Years On was able to show a dog with obvious eye and skin-fold problems (not entered at Crufts, I note, despite having qualified) winning at Newbury last year (BOB and Group 1).  It is evidence, though, of why we need vet checks. If they had been up and running last summer, the Newbury champ would not have won. 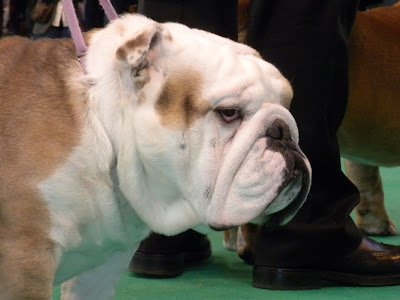 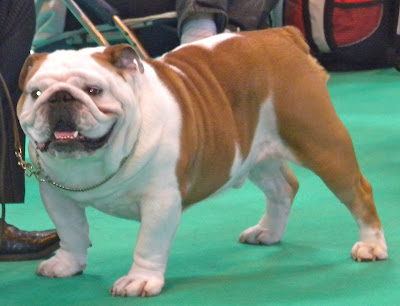 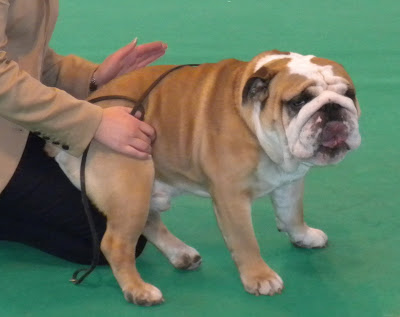 Posted by Jemima Harrison at 11:27