I am a tumour. Lump it or like it. 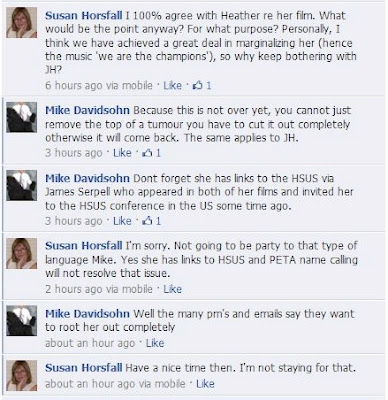 Over at the Stop the BBC Making Another PDE Facebook site (time for a new name, no?), there has been a bit of a spat today between the Group's leader, Mike Davidsohn, and poodle breeder Susan Horsfall over where the group goes now.

Ms Horsfall appears content to call it a day, saying that the fact that the film hasn't had much publicity and the fact that it was relegated to BBC Four must be due to their successful campaigning.

Mr Davidsohn, however, likens me to a tumour and wants me "cut out", claiming further that he's had lots of "PMs and emails" from others demanding this kind of satisfaction.

Ms Horsfall has recoiled rather from this overt display of Mr Davidsohn's vendetta against me and has said she wants no part of it. For which I thank her.

Truth is, I suspect, that the campaign has made Mr Davidsohn feel rather important (they wrote to the Queen you know and seemed inordinately pleased with what was an entirely stock reply) and now... well, I guess it's back to being a taxi driver and small-time poodle breeder and exhibitor.

It is true, incidentally, that the film hasn't had as much publicity as the first one (although there were features in most of the Sunday newspapers the day before transmission).  But, really, it was never going to be the big news that Pedigree Dogs Exposed was in 2008 - sequels rarely are. And, yep, it was shown on BBC Four, rather than the heady heights of BBC One this time, meaning a much smaller audience. But that was nothing to do with any campaign. It was because the original film was commisisoned by the BBC's Richard Klein when he was a Commissioning Editor across all BBC Channels and now he's Controller of BBC Four. He wanted the sequel for his own Channel and of course I agreed. It was his faith in the project that ensured Pedigree Dogs Exposed got made in 2008.

The good news is that the most numerous complaint about the programme so far has been from viewers saying the film should have aired on BBC One. So who knows.... it may yet air to a bigger UK audience.. And we deliver the international version of the film next week.

And one more thing, Mr Davidsohn. It has been pointed out several times that you are mixing up Professor James Serpell with Professor Steve Jones and you did it again today by claiming that James Serpell was in the sequel. He wasn't. That was Steve Jones. Look him up. He's quite important in the scientific scheme of things. But it is true he has never bred a dog.

And, again, I have no links with HSUS or PETA, other than speaking at a conference last year co-sponsored by HSUS, alongside many others who could not in a million years be accused of having "links with HSUS", such as representatives of the American Kennel Club.
Posted by Jemima Harrison at 21:30