I am glad to see that Terrierman has picked up the Mastino mantle today with two strong posts on the Neapolitan Mastiff.

In one, he explores the breed's sham history and the extent of their health problems - including cherry eye, skin problems, hip and elbow dysplasia,  the high rate of assisted matings/C-sections in the breed and, of course, the fact that they are often dead by three years old (although perhaps that's a blessed relief).

The other post challenges their classification as a working breed.

Meanwhile, the Veterinary Times has picked up from my previous Mastino blogs and in this week's issue carries strong quotes from the veterinary profession condemning the exaggerations seen at Crufts.

In a joint statement, the BSAVA and BVA said: "This is clearly an example of a breed that has serious problems and is suffering through exaggerated conformation. In terms of what is happening in the show ring, we hope the introduciton of [veterinary] checks from next year for the most high-profile breeds will ensure dogs like these will not make it into the ring and will no longer be seen as desirable or good examples of the breed.

"However, in terms of tackling the actual health problems within the breed, these pictures should be  stark wake-up call to breed clubs and The Kennel Club that urgent action must be taken. If it doesn't act now, the calls for the breed to be deregistered will become even louder."

The Kennel Club tells Vet Times it "wants to see urgent changes" in the Neapolitan Mastiff. What a shame, then, that since accepting the Neo for registration 10 years ago the KC has singularly failed to halt the exaggerations that blight the breed or, in fact, to introduce a single recommended or required health test.

The Neos are also the front page story in DogWorld where, depressingly, the breed club secretary Denise Bucknall is quoted saying that improving the health of the breed could take up to six generations.

“Both experts and the various reports on this issue recognise that it will take decades before the problems really begin to be resolved" she said.

Blimey. How many more of these poor dogs have to be born?

What is needed is for the KC to be brave enough to demand that Neapolitan Mastiffs look more like this fella - a young UK working-bred Mastino. It is the single best move they could do to help ensure that fewer dogs are born to suffer. 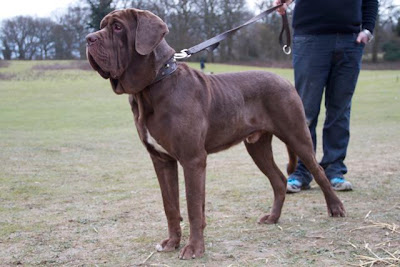 Cello, above, is not KC-registered but he's eligible because both his parents are KC registered Neapolitan Mastiffs and their parents before them.

To the show-heads, Cello is an abomination - despite the fact that he looks much more like the dogs on Roman murals that they claim is the inspiration for the modern breed; and despite the fact that the extreme wrinkling on the show dogs is an entirely recent development. The show breeders will, in fact, swear blind that Cello is a mongrel.

This clearly needs to change. And here's hoping the UK Neapolitan Mastiff Club is big and bold and brave enough to realise this.  I am sure they are feeling a bit bruised by the onslaught but I would urge them to see that breed history (invented or real) is no excuse for breeding dogs whose lives are unacceptably burdened by what we think is OK. As someone commented on a previous post, we used to have slavery and be-heading too - it doesn't make it right today. Times change and the dogs must come first. And perhaps here's an opportunity for the UK to lead the way - as it has on so many animal welfare issues in the past.

Like this one - from a top UK show kennel. Just look at those feet... ouch.

Posted by Jemima Harrison at 15:05