More on the Mastino

Just to be clear what the fuss is about, here's the official picture of the Neapolitan Mastiff BOB at Crufts 2011,  Belkeiminter Marquinn.  His win was not a one-off aberration.  This dog has also won widely elsewhere, including:

Here for comparison is a working-bred Neapolitan Mastiff, Dante, owned by Roger Williams in the US. Roger breeds performance-orientated family guardians and personal protection dogs. 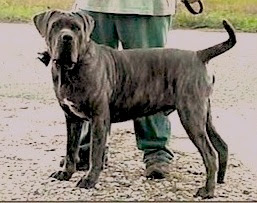 And below is a photograph of Dante's son, Mog. There is no excess flesh on his body or legs; only moderate wrinkling on his head and his eyes are a revelation compared to the showdogs - there is no exposed haw in which damaging debris can collect. And, surely, this dog looks the part far more than anything you'll see trotting round a show-ring? 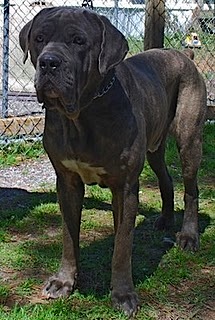 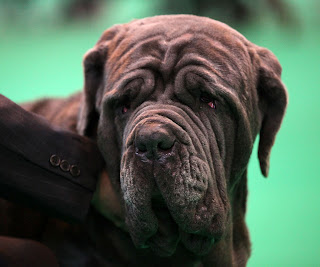 It is the working dog that needs to provide the template for so many breeds - dogs bred by those who are breeding for function, not to a written template that is open to too much interpretation by people who have either lost sight of what a dog should be about or never knew it.

I am pleased to report that there has been  considerable consternation by some within the show world at the state of the Neapolitan Mastiffs at Crufts. "I was shocked to see some of the BOB winners which looked to me to be almost deformed yet they were in the big ring at Crufts as top specifiments of their breeds!" writes top judge Sigurd Wilberg in this week's Dog World. "Surely with such a large audience watching at the NEC plus the extensive television coverage with millions viewing, these dogs' presence and wide exposure cannot have done the pedigree dog world any favours."

Boerboel enthusiast Norman Epstein, meanwhile, warns those in his own breed to guard against the insidious, creeping exaggerations that within just  few years can transform a fit and functional dog into a caricature of its former self.

"If there was even a minimum test for function and movement does anyone think those cripples would have been able to exhibit those exaggerations and still be able function in any capacity?" he writes on his blog.

"The next thing that might have crossed our collective minds is how anyone could think that those dogs are beautiful and are exceptional representatives of their breed.

"Exaggerations occur slowly. In the case of the Neapolitan Mastiff the dogs that started to win and or score higher had more bone, more wrinkles were larger than the ones that were not winning. Therefore the breeders surmised if the judges wanted wrinkles and loose skin etc. then they would really like a lot more wrinkles loose skin.

"A little closer to home we have most of the English Mastiffs today, and because of the same shapers of show phenotypes are now weighing in around 200 pounds and have the bone of a mule. Must be a real man stopper and they might be if they could get up from their ongoing nap and dysplasia. Can it happen to the Boerboel? You do the math."

Posted by Jemima Harrison at 10:10