I have been impressed by the Hungarian Vizsla Club before. They were outspoken about last year's Crufts' winner Yogi's over-use as a popular sire and they have fully-embraced pet owner Di Addicott's campain to get polymyositis in the breed researched and recognised.

The pictures on the left show what the condition did to a gorgeous Vizsla boy called Radio who died in Feburary 2008. Sadly, there have been dozens more (with many more suspected unreported).

Polymyositis is a quite horrific neuromuscular problem which. among other things, robs the dogs of the ability to chew and swallow food. Dedicated owners can spend hours feeding their dogs and doing everything to stop the dogs inadvertently sucking food into their lungs where it can rapidly lead to life-threatening infection.

Of course the condition itself is a bad news story. But the reason for the title of this blogpost is the way in which  the Hungarian Viszla Club has stepped up to the mark on polymositis.

The HVC is supporting a fully-open registry of dogs affected with the condition and pedigrees of 41 dogs have already been submitted.

This morning I caught up with Dog World breed notes writer Karen Bicknell and Betty Smith, Chairman of the HVC,  both very proactively pro-health. It is clear they are still struggling with some breeders who would prefer to keep polymyositis under wraps, but there are many on board, too.

Karen urged me to talk to breeder Lynn Eales, who recently withdrew her top dog,  Kizvarda Karoly ("Digby"), from puppy-siring duties after discovering that one of his 128 puppies had been diagnosed with polymyositis.

I played devil's advocate and asked Lynn:  "But why would you do that when it is only one puppy in so many?"

"I was heartbroken," explains Lynn. "Digby is a wonderful dog. He works on shoots and has been shown to championship level. He has a lovely temperament. So it is a huge loss. We had big plans for the future but that's it now for us. I could not knowingly breed this disease and don't understand anyone who could. The suffering is unbelievable."

Lynn welled-up as she described one 10-month-dog with polymyositis who has learned to stand with his paws on a table for half an hour after he's been fed to help prevent food from entering his lungs.

Sadly another of Digby's puppies has also recently been diagnosed.

Lynn has since contacted the owner of every bitch that has had puppies by Digby and asked them, in turn, to contact every single person who bought one of his puppies to make them aware of the possible problem. 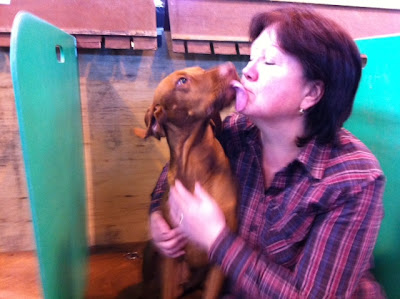 Here is Lynn with one of Digby's sons, 13-month Rio, who came seond in his class at Crufts this morning.

With breeders like this, they'll soon have polymyositis licked, too.

Posted by Jemima Harrison at 21:28