The Terrierman hangs up his blogging boots 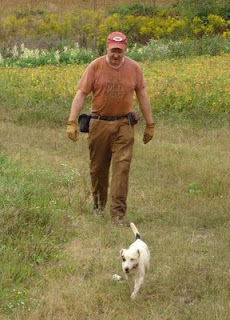 For the past five years, Pat Burns' Terrierman blog has been compelling reading. He is, depending on your view, either a bold, sharp and provocative read for everyone interested in dogs, or an arrogant, opiniated sod who can be breathtakingly rude.

Yesterday, Patrick annnounced that he is moving on to pastures new. He is wrapping up his trail-blazing blog - he says maybe not permanently, but I fear this is a sop to devotees like me who are gutted that he's hanging up his blogging boots; akin to a jilting lover trying to dump you gently by saying they just need a bit of break. Honestly, it felt like a death in the family when I read the news this morning. Patrick's brilliant  Inbred Thinking, written in May 2006, is a seminal work and was one of the main triggers for my own dog reform journey. But there is very much more than this to treasure on his blog archive which I hope will be preserved. If you haven't already discovered him, get over there now.

Behind the scenes and from across the Pond, Patrick has also been an inspiration and motivator personally. He's made me laugh, often, and more than once made me wince with some sharp observation or (mostly deserved) criticism. I have learned a great deal from him.

I am looking forward to meeting him and his dogs for the first time in April when I go to a conference in Washington where I have been asked to speak on what's happened since Pedigree Dogs Exposed.

In the meantime... Pat Burns - thank you.You will be missed.

In tribute to the Terrierman who has a much stricter Comments policy than me, no anonymous comments allowed on this one... If you want to praise - or be rude - stand up and put your name to it.
Posted by Jemima Harrison at 09:50