The bald truth about the Chinese Crested 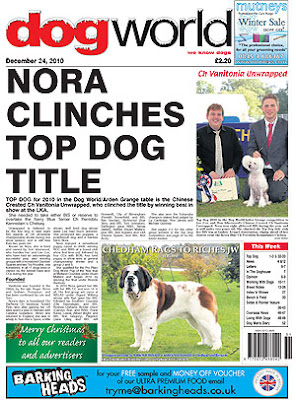 The top dog for 2010 in the Dog World/Arden Grange table (UK) is the Chinese Crested Ch Vanitonia Unwrapped (left), who clinched the title by winning best in show at the LKA, reported Dog World just before Christmas.  Vanitonia Unwrapped - pet name "Nora" - is believed to be the first dog to take eight Best in Show awards at UK all-breeds championship shows during one show season, and she is still less than two years old.

I've been having a low-level exchange with the Kennel Club about the 'Cresties" for a while now. My beef? That the dogs are being shaved and
depilated to look like they're hairless when they're not.
I spend enough on my dogs without having to buy them jumpers, too, so the hairless Chinese Crested is not a breed I have ever been interested in. But my hackles rose when I read an editorial about grooming them in Dog World a few weeks before Crufts last year. The writer wrote openly about how many of the dogs are not really hairless and so to meet the breed standard that calls for a smooth, hairless body the hair is removed.  She then went on to explain how to shave the poor little mites and then apply a depilatory crème as if it was the most normal thing in the world.
It isn’t - as you can see from the pictures of the very sore-looking Cresties below.

The Chinese Crested comes in two varieties. There’s the  ‘powderpuff” which has a full coat – and, indeed, is rather appealingly scruffy. And there's the "hairless" which can, in fact, be born with a varying amount of hair.  If it's sparse, they're known as a 'true hairless' and if they have more, they're known as a 'hairy hairless'.


It’s the hairier Cresties that have the best ‘furnishings’ – the luxuriant mane, tail and ‘socks’ that make the dogs look like My Little Pony. The ‘true hairless’ has much less hair in the 'right' places and so is nothing like as showy.  Indeed, the true hairless is usually pretty obvious in the ring because of this – and also because of the primitive dentition that comes with the hairless gene.  Certainly, a judge only has to look in the dog's mouth to tell the difference between a dog carrying the hairless gene and a shaved powderpuff (which sadly does happen).  So, the less hirsute ones are the genuine article and the ones with fluffy 'furnishings' are, mostly, dogs from which a lot of body hair has been removed. Sad to say, almost every bald dog I saw in the ring at Crufts was a fake. And the reason? These are usually the ones that win.
Worse, I was contacted shortly before Crufts last year by a groomer who told me that some breeders are waxing the dogs and even using epilators – both of which pull the hair out from the roots. Ouch.  It made the breed top of my watch-list for last year’s Crufts - and I'll keep an eye out this year, too.
I dream of the day when I contact the Kennel Club to tell them of such issues and they write back thanking me for drawing it to their attention and reassuring me that they will do everything in their power to make such abuses stop.  Oh, and then actually stop it.
It started off promisingly enough. This is the email I got back from the KC’s Sara Wilde: “We are very concerned at the suggestion that owners may be using depilatory creams and thereby causing harm to their dogs.  This is clearly against Kennel Club rules which are in place to ensure dogs’ welfare and we will be monitoring the situation at DFS Crufts.

“We have also recently written to the breed clubs to highlight our concerns.  You will, I am sure, be aware that our Breed Watch pages highlight the specific issues of clipper rash and razor burns in Chinese Crested Dogs and thus the judge at Crufts (as well as other shows) has had this matter highlighted to them.  At Crufts there will be clear notices displayed in all grooming areas reminding exhibitors of KC rules relating to preparation of dogs for showing and these areas will be monitored by the stewards as in the past.  Our policy of random testing for banned substances in the coats of dogs remains in place.”
Two hours after this email, another one landed in my inbox - this time a post from a closed Chinese Crested list, forwarded by a concerned Chinese Crested owner who is also horrified at the practice of denuding the dogs. It read: “…I have just had a member of the KC general committee on the phone and they have had insider info that Jemima Harrison will be targeting Chinese Cresteds at Crufts. They also have undercover cameras with the intent to film people shaving their dogs. This will be used in the next programme due to come out. PLEASE, i urge everybody, put differences aside and all pull together. For the good of the breed be on the look out and DO NOT shave at CRUFTS. please tell as many as possible.”
Now there IS no "next programme", we were not filming at Crufts and the KC had no reason to think that we were, although it’s certainly true that there are now any many people who will send me photographs and videos of things that alarm them.  But I did go to Crufts and I did visit the Cresties to see for myself what was going on. 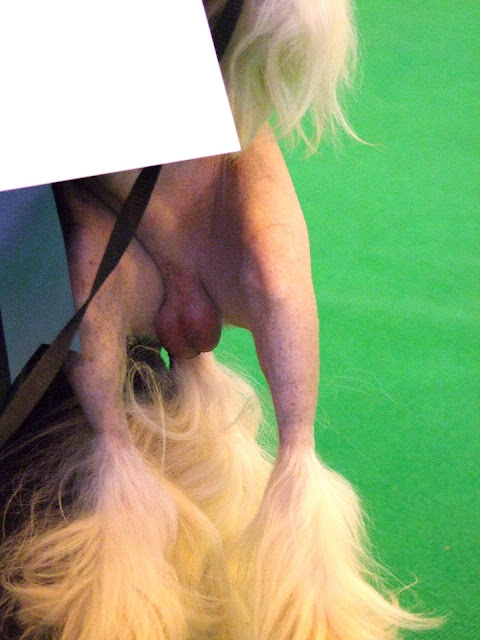 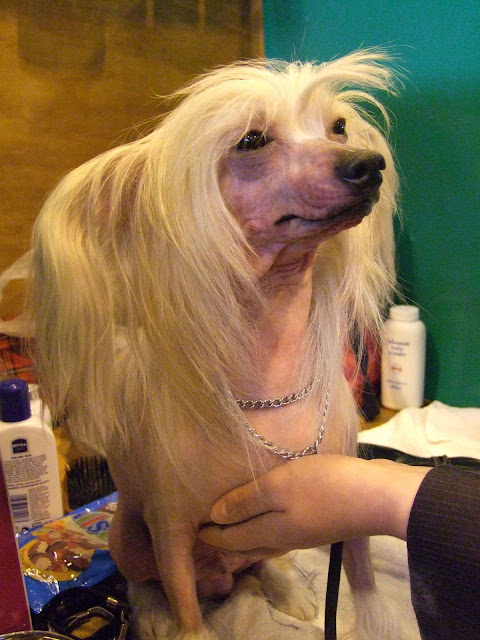 I walked round with vet Pete Wedderburn, who writes a column and blog for the Daily Telegraph. Pete took the Crestie pictures above of very sore-looking dogs.  He was particularly shocked at this male's clearly raw testicles.
Afterwards, on one of the main Crestie internet lists, they chatted about how, although the KC had warned there may be spot-checks, there had been none on the Chinese Crested.  So much for the promised monitoring.
I nagged the Kennel Club about this again recently. Their reply: "[It is] in hand, Jemima, and will be announced in due course."

But I will be surprised if they take steps to stop this because many Crestie exhibitors see absolutely nothing wrong with denuding the dogs. They don't want things to change.

I should say, by the way, that I have no evidence to suggest that Vanitonia Unwrapped is shaved and depilated for the show-ring.

But others most certainly are and, helpfully, one American exhibitor has posted a how-to-guide online. 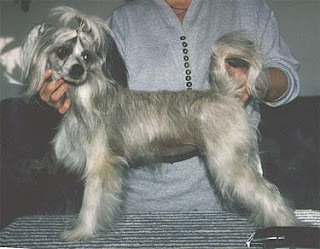 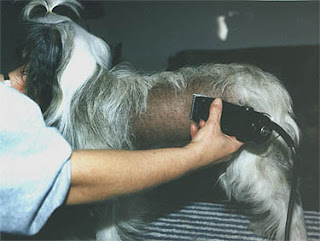 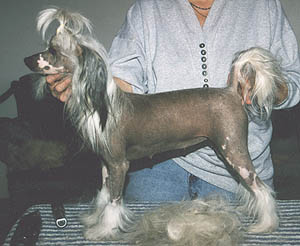 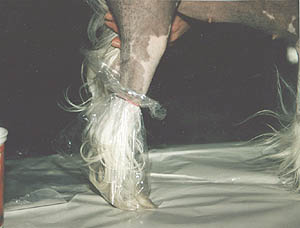 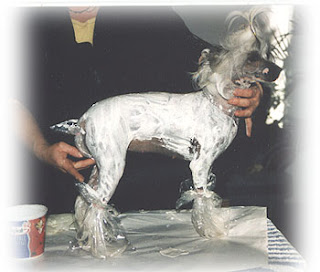 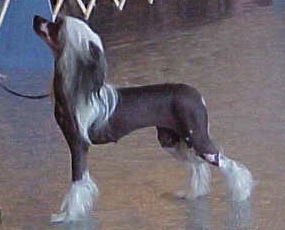 Posted by Jemima Harrison at 21:01