The other PDE - Pug Dog Encephalitis 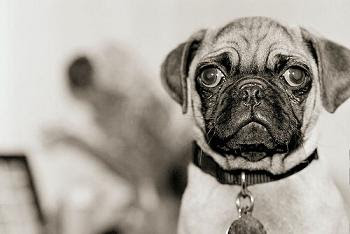 Some good news from UC Davis. They've developed a new DNA test for Pug Dog Encephalitis (PDE), a nasty condition also known as necrotising meningoencephalitis (NME). It claims the lives of about one in 100 Pugs.

PDE/NME is an inflammatory disease of the central nervous system that is usually progressive and fatal. Symptoms include seizures, depression, ataxia, abnormal gait and blindness.   Female, fawn Pugs younger than 7 years of age are more apt to develop NME than older, non-fawn males.

Last year, researchers found that pugs that have two identical copies of particular markers have an increased risk of developing the condition (an observed risk of 12.75 over  their lifetime compared to a risk of just 0-1.08 for Pugs that have only one or no copies of these markers). (Reference here.) Now UC Davis has made a test available to Pug owners and breeders.

It's important to note that this isn't a "definitive diagnosis" test, just an indicator of risk.  Only one in eight of those dogs with two copies of the risk markers will develop PDE. But it is useful nevertheless and, interestingly, the markers are located at or near what are known as DLA class II genes - genes that code for the immune system. Genetic diversity in this area of the genome is considered a particularly good thing, as I have documented here.

In other words, using this test to help identify dams and sires that won't produce pups that have two identical copies of the PDE/NME markers could prove to be beneficial in other ways too