Fitness tests for the unfit fifteen

In the face of continued strong criticism about the state of some breeds, and in response to campaigners who have long argued that the show-ring must reward something other than looks, the KC announced today that, from 2012, fifteen troublesome breeds must pass a vet-check before they will be awarded the big prizes.

It is, of course,  astonishing to anyone outside the wierd world of dog shows that animals with obvious health problems could ever win. But it's a depressing fact that dogs that are lame, have sore eyes, skin problems and even breathing issues are sometimes rewarded by judges. This is sometimes because the health issue is so ubiquitous in the breed that judges no longer see it as abnormal (red and baggy eyes in Bassets and Bloodhounds, for instance), or because the judge believes that "type" (the essential "essence" of a breed as defined in the breed standard) in some way over-rides a corneal ulcer or obvious respiratory distress.

The KC announcement seeks to address this, and also - significantly - is designed to distance the KC from the damage that these breeds continue to do to the KC's reputation because of the fodder they provide to critics like me.

“The majority of people involved in showing dogs, including the 15 high profile breeds, are doing a good job in moving their breed forward and many judges are ensuring that health is paramount when they judge. This work should be applauded and recognised," says KC Chairman Ronnie Irving.

“Sadly though, a few judges in some breeds simply can’t or won’t accept the need to eliminate from top awards, dogs which are visibly unhealthy. Neither we who show dogs, nor the Kennel Club which must protect our hobby, can reasonably allow that state of affairs to continue."

In other words... It's them, sir, not us! Pretty outrageous, really, given the role the KC has played in the development of all these breeds - analagous to Henry Ford blaming a deathly fault in the Model-T on the workers that built it.

The 15 breeds are: Basset Hound, Bloodhound, Bulldog, Chow Chow, Clumber Spaniel, Dogue de Bordeaux, French Bulldog, German Shepherd Dog, Mastiff, Neapolitan Mastiff, Pekingese, Pug, Shar-Pei, the St Bernard and - da-daa - the Chinese Crested. I'll be demanding all the credit/blame for the inclusion of this last one as it was me who drew the KC's attention to the fact that breeders are resorting to ridiculous means to ensure their dogs are entirely free of hair in all the right places. 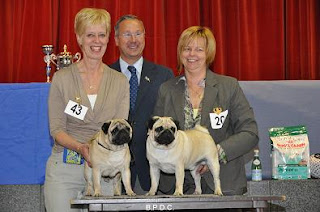 Still,  I'm not getting too excited. The vet checks are being done by KC-appointed show-friendly vets, not an independent group appointed by the British Veterinary Association. One of these, Andreas Schemel (seen right), is a breeder, judge and staunch defender of the right to breed pugs with ridiculously flat faces. What he would consider normal in brachycephalic breeds such as the pug, peke and bulldog is likely to be entirely different to a vet operating outside of the KC bubble.

Finally, it is only 15 breeds and there's nothing in the new initiative to stop a dog with a non-visible hideous genetic problem from winning rosettes and then (as we saw in Pedigree Dogs Exposed) going on to sire the next generation of sick pups. And why on earth do we have to wait another year before obviously sore, lame, squinting and gasping dogs are barred from being awarded prizes?

As one commentator on the Dog World reporting of the announcement this morning opines: "Listen to my one hand clapping."
Posted by Jemima Harrison at 13:04