Have a really good look at these two dogs as it's revealing for a host of reasons.

As you can see, they are enormously different once you get past the similar markings.

Now it's by no means always true that the US show-dogs are always worse than the UK show-dogs - and not all Bostons in the US look like the dog on the right. But, boy, the Westminster winner is just awful.

First look at the heads.

Leaving aside that the US dogs' ears have been cropped (why would you do that in a breed with naturally erect ears?), the US dog has a shorter muzzle and a rounder, more domed head with a shorter back-skull - all features that predispose to syringomyelia (which sadly is increasingly documented in this breed). Note too the rounder, more prominent eye; another potential health issue.

Then see the difference in how the necks flow from the head - and how much thicker the US dog's neck is, too? 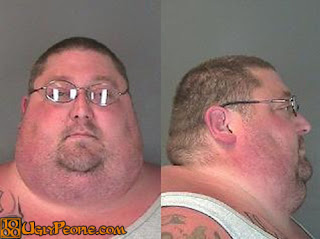 Would you expect this man to snore at night? You betcha. And in a soon-to-be-published paper from the Royal Veterinary College, we will see that thick necks (whether from obesity or selective breeding) are a predisposing factor to breathing problems in brachycephalic dogs like the Boston.

Now to the feature that I expect first grabbed people's attention - the terrible "posty" rear end on the American dog. 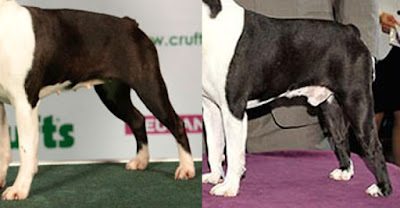 I am at a loss as to how anyone could think that's a good idea. We know that straight back legs in dogs can cause cruciate ligament injuries and, ta-da... what's the most common orthopaedic problem in Bostons according to the Boston Terrier Club of America? Luxating patellas.. which lead to cruciate tears (see here).

That shorter back is a worry too as it is linked to hemivertebrae (a painful, sometimes paralysing spinal problem caused by misshapen vertebrae). And, guess what? Hemivertebrae is a common problem in Bostons.

The 2014 Westminster winner is not a one-off... Here's the 2015 Westminster BOB, showing a better length of body, but still a very short muzzle, prominent round eye and those bizarre back legs. 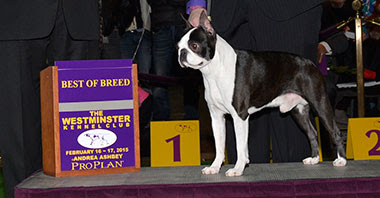 Of course, when you point out the obvious link between particular physical features and disease in breeds, you are met with a wall of denial from breeders - and videos which are supposed to prove that the whole breed is entirely healthy. Or if they're not, they've been bred by those awful backyard breeders. In fact, those awful back-yard bred dogs are usually way more moderate, especially when it comes to the length of their muzzles.

Here is how today's show Boston compares to a champion Boston from 1933 and a modern show x pet Boston.


Bostons are also a mess on the inside - the KC's 2004 health survey found that a whopping 92 per cent of them had been delivered by C-section.

But here, to cheer you up is a great video showing just how athletic Bostons can be.


Now Rosie here does have raspy breathing, but there wouldn't be much to complain about if all Bostons were like this.

And how great would it be to see a balloon keepy-uppy competition for Bostons at Crufts and Westminster?