UC Davis challenge: prove your Bulldog is healthy and we'll diversity-test for free 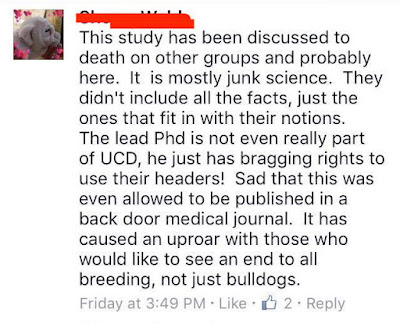 The Bulldog world has gone tonto following the publication last month of a study from a team at UC Davis which found that there was so little diversity in Bulldogs (or English Bulldogs as they're usually called outside of the UK) that there was little hope of being able to improve the breed.

On social media, the comment above is about par for the course. In case it needs to be said, it is also at best untrue and at worst defamatory. Professor Pedersen and the team at the UC Davis VGL Laboratory are leading researchers in the field. The paper was published in Canine Genetics and Epidemiology (a journal in fact financially supported by the Kennel Club ).

In truth, the paper was wincingly blunt about the extent of health issues in the breed:

The health problems of the English bulldog have been well documented and start with conception, fetal development and parturition. Severe conformational changes have necessitated a high rate of artificial insemination and Caesarean sections and litter sizes tend to be small. The breed ranks second in congenital disease and associated puppy mortality, due mainly to birth defects such as flat chests with splayed legs; anasarca (water babies) and cleft palate.  Although some English bulldogs enjoy reasonable health, their longevity is definitely affected by the degree of conformational change and inbreeding, which is reflected by lifespan estimates ranging from 3.2 to 11.3 years with a median of 8.4 years.  Individuals requiring extensive veterinary care at a young age rarely live beyond 5–6 years of age, leading to a bimodal mortality curve for the breed.


The brachycephalic syndrome is a leading cause of ill- health and death in the breed. However, the syndrome is not caused by brachycephaly per se, as brachycephalic breeds such as the boxer do not suffer the syndrome to the same degree. The bulldog tongue is excessively large at the base, the palate is large and easily obstructed by the base of the tongue, the lower jaw is pushed forward (prognathous), and the nares are frequently stenotic and the trachea hypoplastic. This leads to loud panting during physical exercise, stridor during rest and slobbering; sleep apnea, hypercapnia and hypochloremia/hypomagnesemia; exercise intolerance, cyanosis and collapse; and choking fits manifested by gagging, retching, vomiting, aerophagia/ flatulence and aspiration pneumonia. The breathing difficulties of English bulldogs also make them very sensitive to overheating and heat stroke.

Chondrodysplasia, a heritable skeletal disorder that has been incorporated into the phenotype of many dog breeds, predisposes English bulldogs to skeletal disorders such as hip dysplasia, elbow dysplasia, luxating patella and shoulders, intervertebral disk disease, cruciate ligament rupture, hemivertebra, torsional pelvic deformity and problems with normal copulation and parturition. Prognathism predisposes to dental disease, while excessive folding of the skin, especially on the face, is associated with skin fold dermatitis, muzzle acne, folliculitis, furunculosis, and eye conditions such as entropion, ectropion, and eversion of the third eyelid. The cork-screw tail can result in tail fold dermatitis. Other heritable conditions that are related to loss of genetic diversity and inbreeding include cataract, various heart valve defects including pulmonic stenosis, hydrocephalus, cysteine urolithiasis, and hiatal hernias; immunologic disorders that include a propensity for severe demodectic mange indicative of immunodeficiency, allergies associated with atopic dermatitis and ear infections, and autoimmune diseases such as hypothyroidism; and cancers including glioblastoma, mast cell sarcoma and lymphoma. Although the bond and affection between English bulldogs and their owners is strong, the cost of treating health problems is often prohibitive and many of them end up in shelters or euthanized.

Now, in response to the widespread upset from Bulldog lovers, UC Davis has posted a challenge on the university's website:

We believe that this paper accurately portrayed the current genetic and health problems of the breed, but we did mention that there was still phenotypic variability among bulldogs and that there are bulldogs that breathe freely, move freely, reproduce naturally, and that are free from skin and eye problems, allergies and other immunologic disorders. We did state, however, that it might be difficult to find a single dog that met all of these criteria.

Therefore, we are offering a challenge to bulldog breeders and owners from around the world to provide us with proof that their dog is a purebred (registered) English bulldog and to include a narrative and photographs/videos that supports their health status.  Please email us at: healthybulldogs@vgl.ucdavis.edu with this information and if we feel that this is indeed a dog that meets the criteria listed above, our Veterinary Genetics Laboratory will provide you free of cost with a DNA collection kit and from this a genetic profile of your dog that can be compared with the information provided in our genetic assessment paper.


The UC Davis team says the impetus for the challenge came from an email from a Bulldog owner who sent them these pictures of their Bulldog 'Spike' (born and registered in India but now living in the UK). 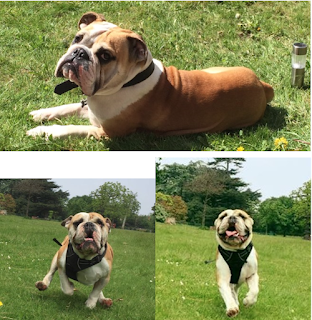 Spike, said his owner, is as an active, healthy dog who loves to play. They admit he doesn't have the widest nostrils and that he snores a bit,  but overall reckon he's fit as a fiddle. He's certainly lovely and lean - always good to see in Bulldogs. And I'd agree that Spike looks good for a Bulldog - although I don't think he'd be considered show material (he is not undershot enough and he doesn't have the correct 'layback').

You can read the whole of the UC Davis statement/challenge here.

Bottom line, I do have some sympathy with the Bulldog folk on this one.  I do think there is a bit of wiggle room in the UC Davis paper.

The study drew its conclusions after studying DNA samples from 139 Bulldogs in total.

• 102 DNA samples came from dogs submitted mainly to test for for coat colour or HUU (hyperuricosoria) (i.e. the tests done by breeders before breeding so presumed healthy). 87 were from the USA, six from Finland, three each from Canada and Austria and one each from Czechoslovakia, Hungary and Argentina.

Now that's a reasonable spread and the researchers found almost no discernible difference between them, hence their conclusions. But of course there were no dogs, for instance, from the breed's country of origin (UK). There has also been concern expressed by some Bulldog breeders that the coat-colour samples represent "colour" breeders who they think are more likely to inbreed (ergo less diverse) and thus are not representative of "responsible" breeders.

Of course, there were dogs being tested for HUU too (a sign of a "responsible" breeder) too and I would be surprised if colour-bred dogs are more inbred that your average show-bred Bulldog. But it's fair enough to question it.

So Bulldog owners... please do rise to the challenge!

I also think it would be a great idea for Bulldog owners in general to get together to send in more DNA samples  - and not least because the current price of just $50 a dog (around £37) per dog is a bargain.

If nothing else, wouldn't proving the UC Davis team wrong be worth it? Even if they're right and you're wrong, you'd still get useful diversity info about your dog - a tool that many breeders in other breeds are now using to breed better dogs.