Thanks a (five) million!

The PDE blog has this week just tipped over five million views.

I started it in November 2010 with the following message:

I should have got this blog up and running when Pedigree Dogs Exposed was first broadcast in August 2008. Guess I hoped there wouldn't be a need... And anyway, I fully expected to have moved on to pastures new by now...

It is now more than two years since PDE. I could never have guessed that the film's subject would have turned into such an ongoing passion. But passion it is, along with running Black Retriever X Rescue and living with my own dogs - trying not to count but there appears to be at least seven of 'em at the moment, plus two fosters.

Inherited disorders and welfare issues related to conformation affect millions of dogs all over the world and much of the problem is due to an antiquated breeding paradigm promoted by a kennel club system founded in England and exported to more than 100 countries. The price is paid by the dogs who suffer unnecessarily and by their owners seduced by a certain look unaware of the welfare cost that often comes with it.

Almost six years and 600 posts on, the blog is more popular than ever - with well over a million hits this year already (due in no small part to the fuss over the German Shepherd at Crufts this year. The post showing the footage that the KC had edited out of the Channel 4 broadcast is now the most popular post of all time, including garnering 250,000 page views in a single day. (Links to all the most popular posts are in the sidebar on the right). 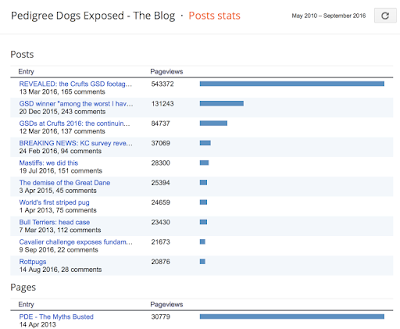 The blog is still most popular in the UK, followed by the US, Canada, Germany and Finland. 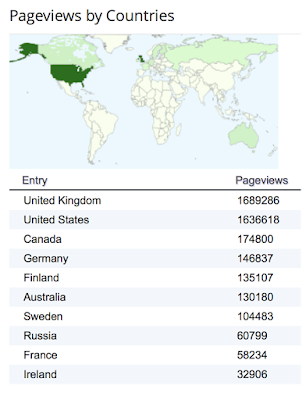 As I hope most people realise, the blog is a labour of love. I am not paid to write it and continue to refuse any offers to "monetise" it.

I write it because I hope and believe it is effective in drawing attention to specific issues and in galvanising those who are in a position to effect change.

Thanks to PDE (the films and this blog) there is a great deal more awareness of the problems and a large community of researchers, welfare bodies and vets focusing on them - absolutely key to drive through reforms.

Today, we have a Kennel Club that acknowledges that inbreeding is an issue and has given breeders tools to tackle it - something that was unthinkable before Pedigree Dogs Exposed when first-degree relative matings were considered acceptable and there was zero awareness that breeding profligately from one top-winning sire might be a bad thing to do.

Today, we have a Kennel Club that is much more aware of phenotypic excess and has taken steps to address them (and quite big steps recently in respect of the German Shepherd).

But we still don't have a Kennel Club that acts without outside pressure. Oh how I long for the day when the KC issues a release saying it is taking action on a particular breed because an internal review has revealed a specific problem. I know there are people at the Kennel Club who would like to be more proactive, but sadly they are often thwarted by those at the top, where the batten-down-the-hatches mode prevails.

I had a good laugh this morning at a BBC report highlighting vets' concerns about flat-faced (brachycephalic breeds).  It contained this gem:

Sean Wensley, President of the British Veterinary Association (BVA) said: "Prospective owners need to consider that these dogs can suffer from a range of health problems, from eye ulcers to severe breathing difficulties."

"We strongly encourage people to choose a healthier breed or a crossbreed instead."

The BVA’s warning has been backed by the PDSA, Royal Veterinary College, RSPCA and the Kennel Club.


Almost blogged it with the title: "KC urges puppy buyers to avoid Pugs, Frenchies and Bulldogs; choose a healthier breed or a crossbreed instead".

Of course it's just bad wording by the journalist who doesn't realise that the Kennel Club would never tell people to avoid a breed - or buy a crossbreed - on health grounds.

I hope the KC will find it too embarrassing to demand a change.

In fact, the BBC piece does go on to include this frustratingly-predictable (and somewhat garbled) deflection from Caroline Kisko:

Caroline Kisko, the Kennel Club secretary, said: "The breed standards were set many years ago. If you look back through history there are some dire things that went on, and undoubtedly we would accept all responsibility for that."

"But I would say that in the here-and-now, after all of the changes to the standards that were made in 2009, we would expect dogs to be far healthier if they are winning prizes at dogs shows."

Mrs Kisko said the problems with brachycephalic dogs were being perpetuated in the main by disreputable puppy farms.

She said: "If we continue to allow dogs to be brought in from central and eastern Europe where there is no concern for how these dogs are bred, it is inevitable that pet owners will end up with dogs they can't deal with."

"These are breeds which aren't hugely suited to pet homes. If you want a pet that will run around and chase a ball and so on, don't go out and buy any short-faced breed based on what celebrities are walking around with under their arm."

And this is why I continue to give up time I don't really have to write the PDE blog. General journalists simply don't have the time or the interest to dig beyond the deflection and easy reassurances uttered by the Kennel Club.

• It is, of course, in the show-ring that you will find the very flattest of faces. In fact, show dogs' faces are flatter now than they ever have been as a direct result of show-ring selection and the pursuit of prize-winning rosettes.  It is important to not be in any doubt about that.

• The KC continues to resist the introduction of minimum muzzle lengths into their standards.

• The standards still include demands that are counter to good health.

And then there's the small matter that all the recent surveys looking in detail at the health cost of having a flat face have been of of KC-registered dogs.  These studies agree that at least half of all Pugs, Frenchies and Bulldogs struggle to breathe (and some have put it a great deal higher than that). Remember, too, that this is looking at just one consequence of being brachycephalic. There are many others, including eye, oral, dental, mating and whelping issues.

Bottom line... Kennel Club-registered dogs are still being bred and shown under the auspices of the Kennel Club in a way that perpetuates suffering for many breeds - and which, unless things change, will lead to their extinction.

At the end of the day, that's what this blog is about.
Posted by Jemima Harrison at 12:35