Danes: the ugliness inside 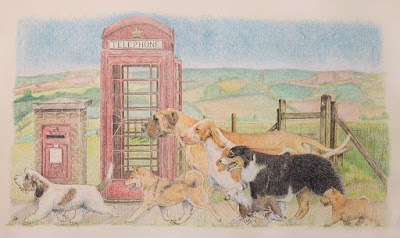 Next week, all 216 Kennel Club breeds will be represented on a walk to raise money for several very deserving children's and canine charities. Pedigree Paws Unite is the initiative of Gavin Robertson, who organised a similar walk, Jilly's Jolly Jaunt, in 2013 after he won Crufts with his Petit Basset Griffon Vendeen, Jilly (Ch Soletrader Peek A Boo).

Like Jilly's Jolly Jaunt, the aim is to promote a positive image of pedigree dogs; that Kennel Club dogs are happy and healthy; that every breed is capable of walking one of the 5-mile legs.

Unfortunately, the Great Dane pictured in the beautiful artwork created especially for the event by artist Elizabeth Greenslade, will not be able to attend.

He has just died of osteosarcoma, aged 4.

"Ryder" (Ch Semalda Koochie Ryder) was, I have no doubt, very well-loved by his owner Adam Chappell. You can tell from his Facebook posts and Twitter feed. Ryder was a good-looking Dane, too - a touch on the heavy side for my taste but with particularly good eyes (worthy of note because we see some really awful ones in the Dane show-ring).  I see, also, that Adam has also signed Maria Gkinala's petition calling for the FCI to act again the hyper-type Danes swamping the European show-ring.

But the problem with Danes isn't just on the outside. A diagnosis of osteosarcoma is as depressingly predictable in this breed as soft-tissue sarcomas are in Flatcoats or malignant histiocytosis in Bernese Mountain Dogs or dilated cardiomyopathy is in Dobermans.

The average age of death of Great Danes is just six years old. It's partly due to the Dane's giant size and fast growth - bone cancer is very common in many giant breeds.

Did you know, there's a breed way bigger and heavier than Danes that is still working at 15 years old and regularly makes it to 20?  It's called the Mongolian Bankhar, similar but distinct from the Tibetan Mastiff.  There is, incidentally, a fantastic initiative breeding and re-introducing these dogs as livestock guardians in their native land - check it out here. 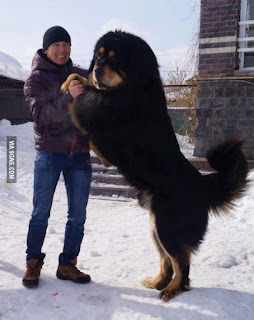 Want some of those genes?

And if, by the way, you read that question, looked at the picture of the dog and concluded that you didn't want those genes because the progeny would't look like a Dane... then I'm afraid you are part of the problem, not the solution.

None of this, I would like to stress, is intended to sour the Pedigree Paws Unite walk. It's in a good cause. But I am not going to pass up the opportunity Ryder's death affords to highlight that there is a problem on the inside of Danes (and too many other breeds) too, and we need to do more to tackle it. It is not enough to hip score or eye-test - or have your Dane prophylactically "tacked" to prevent bloat (another big killer in the breed).

I am sure Adam Chappell would say that he would give anything to have Ryder walking proudly at his side next week.

Every Dane breeder needs to re-think what they are willing for that word to mean.

Posted by Jemima Harrison at 15:04